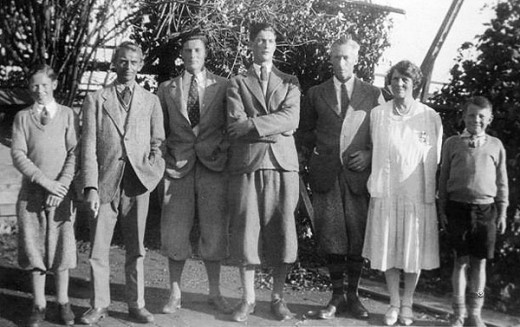 The Osler family lived in Wickhamford just before World War I. According to the 1912/15 Valuation Survey, George Percy Osler was living at 1 Longdon Hill and growing fruit in the 14 acre field behind his house. He had 4 acres planted with Pershores, Choice, Victorias, Prolifics and Damascenes. In 1912 the family sailed to Canada to settle in Victoria, British Colombia. At that time he was accompanied by his wife, Winifred, and two young sons. They later had two more boys in Canada.

The Osler family group, above, must be from the time around 1930 and shows, from the left, Philip, a family friend called 'Dusty', Geoffrey (a New York psychiatrist), Kenneth (a schoolmaster), George Percy Osler (known as 'Jock'), Winifred and Thomas (who became a Vancouver surgeon).

The picture came from George's grand-daughter, Heather Catchpole. Her father was Kenneth, who was killed in Normandy on 12th June, 6 days after D-Day.

Read about the Osler family.