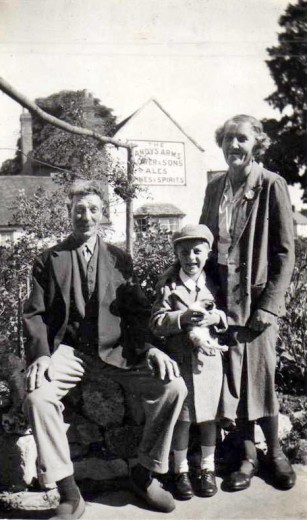 This picture is of John and Annie Spragg. It has the Sandys Arms behind when Flowers beer was sold there.

John Scragg moved to Wickhamford in January 1938 to work for farmer Ted Carter at Pitcher’s Hill Farm and lived at ‘6 Evesham Road’ (now 6 Longdon Hill). A record of his time in Wickhamford is in a report in the Gloucestershire Echo of 6th April 1938 about a B.B.C. broadcast from the Vale of Evesham. John Spragg was one of the people interviewed for the programme. He was described as a ‘milker of Wickhamford’. He later left the village to return to Stoke Orchard and died in Congleton, Cheshire, in 1966.

This picture was kindly lent to us by Jean Ford nee Spragg (John Spragg's grand-daughter).