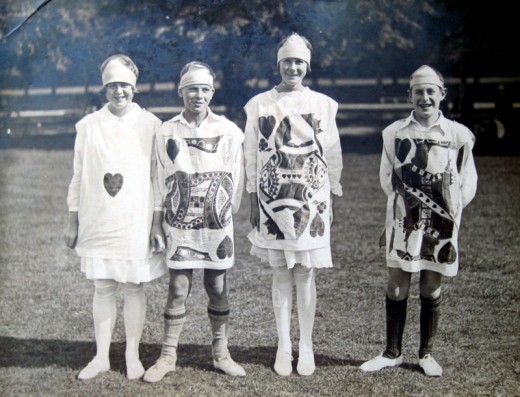 Badsey School children dressed up as playing cards for a performance of 'Living Whist' in Abbey Park, Evesham on 11th September 1928. The children in this photograph are Freda Pitman (Queen of Hearts), Evelyn Cockerton (Ace of Hearts) and Arthur Emms (Knave of Hearts); the King of Hearts has not been identified. The whole group appear in the second picture, taken from 'Heads and Tales. A History of Badsey School' by Maureen Spinks (page 95).

Freda was a daughter of Wilfred Charles Pitman and his wife Florence nee West and they lived at 42 Manor Road, Wickhamford between the Wars.

The picture of the four children was kindly supplied by Mrs Shirley Dowse, Freda Pitman's daughter.