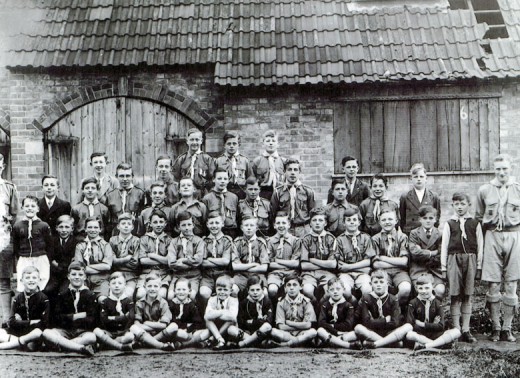 The Badsey Scout group was formed shortly after WW2. This photograph taken in 1948 was kindly lent to us by Robert Hall.

The photo was taken at the rear of the scout hut which became the Royal British Legion Club and is now The Pub in a Club. The old building in the background was used to billet prisoners of war, but was derelict at the time the picture was taken. The land was later bought by Alan Marshall as a lorry park for Marshalls Transport. He later renovated the property and turned it into a large family home. This was then demolished and Manorside was built in its place.

In the same year that this photograph was taken The Evesham Standard of 14th August 1948 ran an article French Scouts at Badsey. A troop of scouts from Verdun visited Badsey and their Scoutmaster Jean Ducasse opened the Badsey Scout Fete held on the vicarage lawn. He invited the Badsey scouts to visit Verdun the following year.