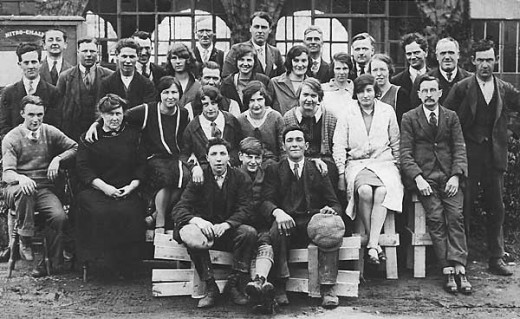 A picture of staff (and possibly some committee members) at Littleton and Badsey Growers (LBG). The date is between 1926 and mid 1930s. On the back of the photo are the following names, written in pencil: C A Binyon, W Brough, A Alder, W Jones, T Bubb, E W Mason, C Gisbourne, and G E Field.

Alan Bunting sent us this photograph which he restored. He tells us that his father S. F. E. Bunting '... is prominent in the centre of the back row with his "trademark" breast pocket handkerchief and I believe that on the far left, under the "Nitro-Chalk" sign, is Victor Smith who was appointed Manager in 1934, although he had worked there for several years before that.'

Here are more pictures of Littleton and Badsey Growers.