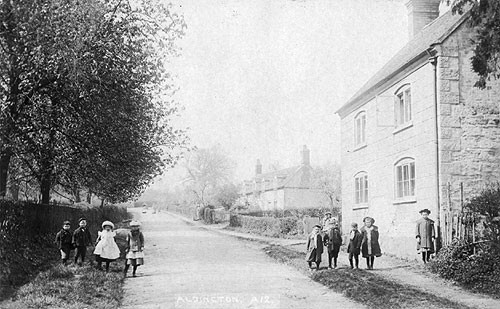 A postcard showing Main Street in Aldington, with Elm Cottage and The White House being featured on the right.

The identities of the children are unknown, but one wonders whether they might have been John and Annie Sharp (children of Jerry Sharp the miller) who lived at The White House in 1901, or Winifred and Varena Butler who were living there in 1911.  Amongst the other children there may have been Frances Jelfs and Garnett Westbury from Elm Cottage.

It has recently come to light that it is one of a series of three photos taken on the same day (the other two photos being of Rose Cottage & Manor Cottage, Village Street, and The Thatch, Village Street), as the same children are featured in all the photos.