Information on the outcome of the 1930 Auction has not yet been found, but many of the 85 lots put up by E.G. Righton & Son do not appear to have been sold. In 1941, one of the Trustees, John Arthur Lord (known as ‘Jock’) had four letters from his Aunt Connie to ask if some of the land and properties still held by the Trustees could be sold. ‘Connie’ was Constance Leigh, a daughter of John Pickup Lord and widow of Charles Edward Leigh, one of the original Trustees of the Estate.

The extracts below are taken from four letters from Jock Lord to his Aunt Connie. At this time he was employed at the Inspectorate of Aerodrome Defences, G.H.Q. Home Forces.

The question of Wickhamford has always worried me and for the last six months I have bombarded Lord & Parker with requests that rents should be collected promptly and some of the arrears paid off. I will tell you quite frankly, what my own personal views are. I know the value of land has increased no end over the last year and the reason for this is that investors are nervous that there will be deficiencies in the currency after the War and feel that their money would be safer in land. This is one view and the other side is that if we don’t win the war and at the same time control inflation what is anything worth!

I would be prepared to buy War Bonds provided that the Trust allowed me to buy further land if and when the opportunity arose. Mollie is quite prepared to consider a sale and would very much like to hear Aunt Alice’s views. If we decided on a sale, I am quite certain in my own mind that local people are far the best to carry it out. know Jackson & Stops are a good firm but they don’t know local conditions as well as the people in Evesham. I will write at once to Johnny Gibbons and see whether it is possible to get him leave for 48 hours and I would then go and meet him to talk things over. I know the Trustees can do what they think right, but I should hate to do anything until I know the views of the larger shareholders!! I am meeting Jack Whiteford on Wednesday week when we will have talked the whole thing over with Mollie.

I think the trouble we shall have to face is the fact that in days gone by the best land only was sold and what is left in some cases is spoilt by these sales. However all that can be thrashed out if we decide on a sale.

I heard from Aunt Alice and she is none too keen to sell Wickhamford unless everyone else agrees. I have had a lot of correspondence with Tenants and Johnny Gibbons and a Pay Roll with Jock Whiteford. At the start he was all for selling but after we had gone more closely into the figures he was strongly of opinion that it was not a practical proposition unless we obtained a very fancy price. From the figures I have I see that the Annual rent (gross) from the Wickhamford Estate is £1564.12.10. The arrears are very small and if all collected and divided amongst us, wouldn’t buy a bottle of gin each ! You must remember that a lot of property has been sold from time to time which is reinvested and actually taken away from the rental income we used to receive from the Estate alone.

If a sale took place on any reinvestment we would have to pay the full rate of 10/- in the pound.

A large proportion of the outgoings from the property are in respect of Tithe, and this would be taken into consideration by a Purchaser, who reduces his bid accordingly. No doubt you have heard all of this before from Lord & Parker, but I feel personally that it is the right advice. A very rich and well informed friend of mine told me the other day that in his opinion, I as a Trustee, would be guilty of a breach of Trust if I sold land at the present time!

I naturally want to do the right thing, but unless I am convinced that land is worse than investments I would rather stay as we are. After all, one always preaches “don’t put all of your eggs in one basket” and this I’m trying to remember. What little money we all have is spread over investments and land, and this seems to me the right decision. It would be bad luck if both went to nothing and that would mean we lost the War, and then nothing matters. So sorry to be so long winded but I have thought the whole thing over carefully and want you to know my views.

(Frederick Maurice Lord, Jock’s cousin, was the other Trustee in 1941.)

I am sorry that you are not satisfied with the policy with regard to Wickhamford. Since my last letter to you I have had a long one from Johnny Gibbons who is strongly in favour of keeping the land unless of course a purchaser comes along at a really attractive price. They are letting it be known among the Tenants that these holdings are for sale, but they don’t appear to be in a position to buy.

If you can prove to me that by selling and reinvesting in gilt edged stocks we can still obtain £1564.12.10 gross income or anything near that figure per annum I would readily agree to put the whole thing up to auction. No doubt I am useless as a Trustee, but I have my share in the Estate and advise on Mollies, and I certainly don’t want to leave my family destitute.

In affairs like this I think one has got to believe the advice given (1) By the solicitors (2) By Raymond Webb (3) By the local auctioneers, who have everything to gain from a sale. My father always made it quite plain that if a sale took place the Firm he would employ was Rightons of Evesham. They have been consulted and don’t think a sale advisable at present. We shall obviously have difficult times in years to come, if any of us are alive after we have finished with Hitler, but I think that will equally apply to all other investments. I shall be only too glad and relieved if someone else can be found to take over my job as Trustee, but until then I think I must accept the advice of people on the spot until such time as I believe it to be wrong.

I have tried to give as much time and thought as possible to Wickhamford and seem to consult about twice a week with 3 Foregate Street. Everyone has now woken up to the fact that land is fetching very high prices and offers to purchase roll in. I try and keep my head and write again and again that I am not a seller unless the price is such that the proceeds reinvested in gilt edged securities will bring in the like income. So far this can’t happen. I have even had two talks with a Vice Chancellor of Cambridge University and he is dead against selling land at the present time. He naturally has a life long experience in such matters.

The general opinion is that selling at present inflated values and have to reinvest in foodstocks standing at absurd premiums.

Very few tenants are behind with their rents, and I personally would rather risk this than walk into an investment which terrifies me at the start. I can’t see how we could possibly raise a mortgage to pay you off and all the other Beneficiaries.

Also surviving is a letter from Connie to one of her daughters, dated ‘Aug. 23’, presumably 1941. In this she said:-

I wrote about twice to Jock and he replied he would ask the family if they would take less income if it was sold some time. So silly! I got angry, wrote the Trustees and demanded my share to be paid now, as my settlement allows, so its settled on you three and goodbye to Lord and Parker. The others are very pressed and it’s a weight off my conscience, but was a great effort.

The Sale of the Estate to Christ Church College in 1950

The map below shows the extent of the land purchased by Christ Church College in 1950. Some fields to the north-east are on the Badsey parish side of Willersey Road. 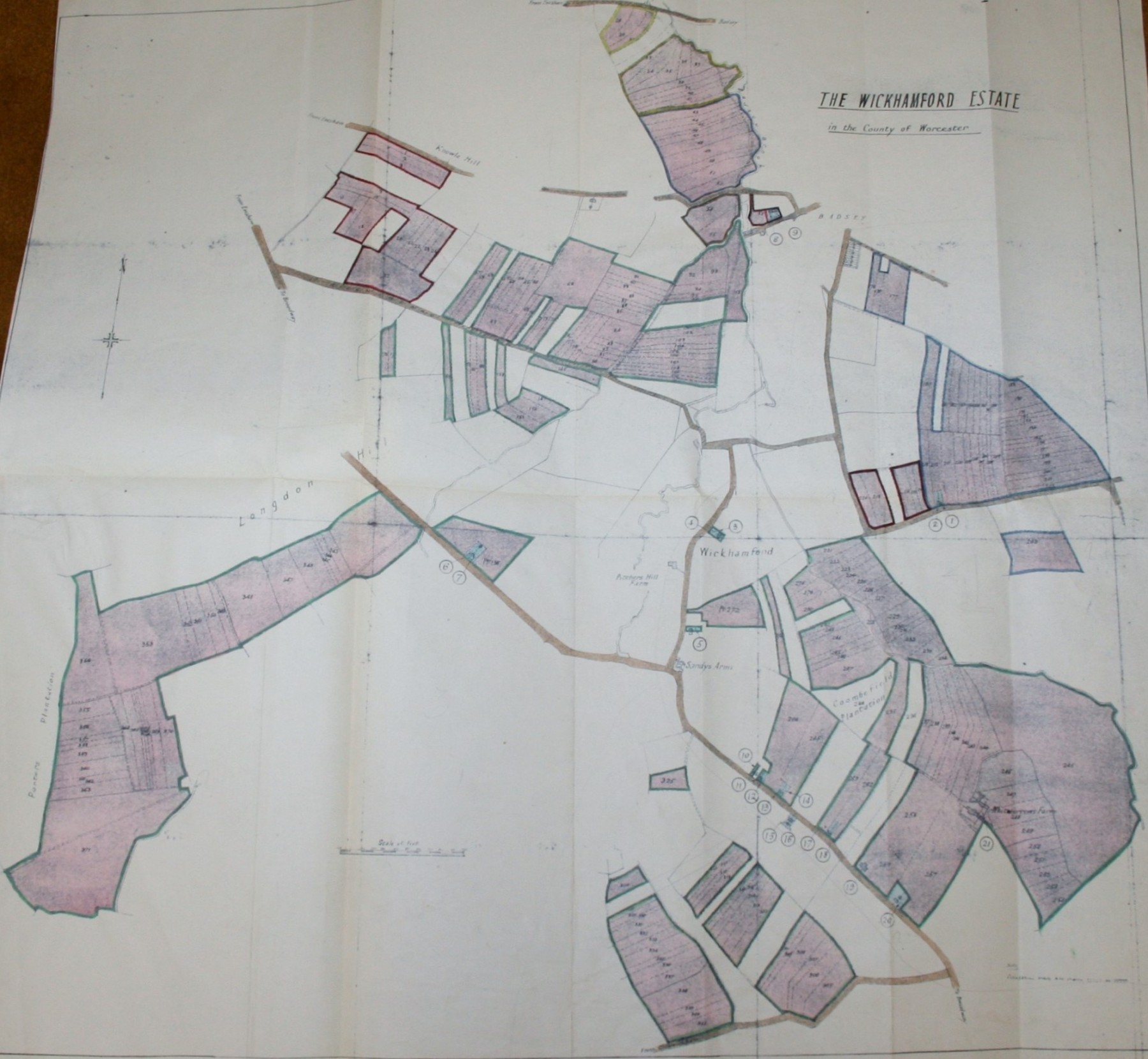 The map below shows land in Wickhamford owned by Christ Church College in 2016 – shaded yellow. There are many fields between Wickhamford Lane and Knowle Hill, a few south of Wickhamford Lane, a few to the south of Longdon Hill and some either side of the main Evesham to Broadway road at Pitchers Hill. (The fields to the east of Willersey Road are in Badsey parish.) 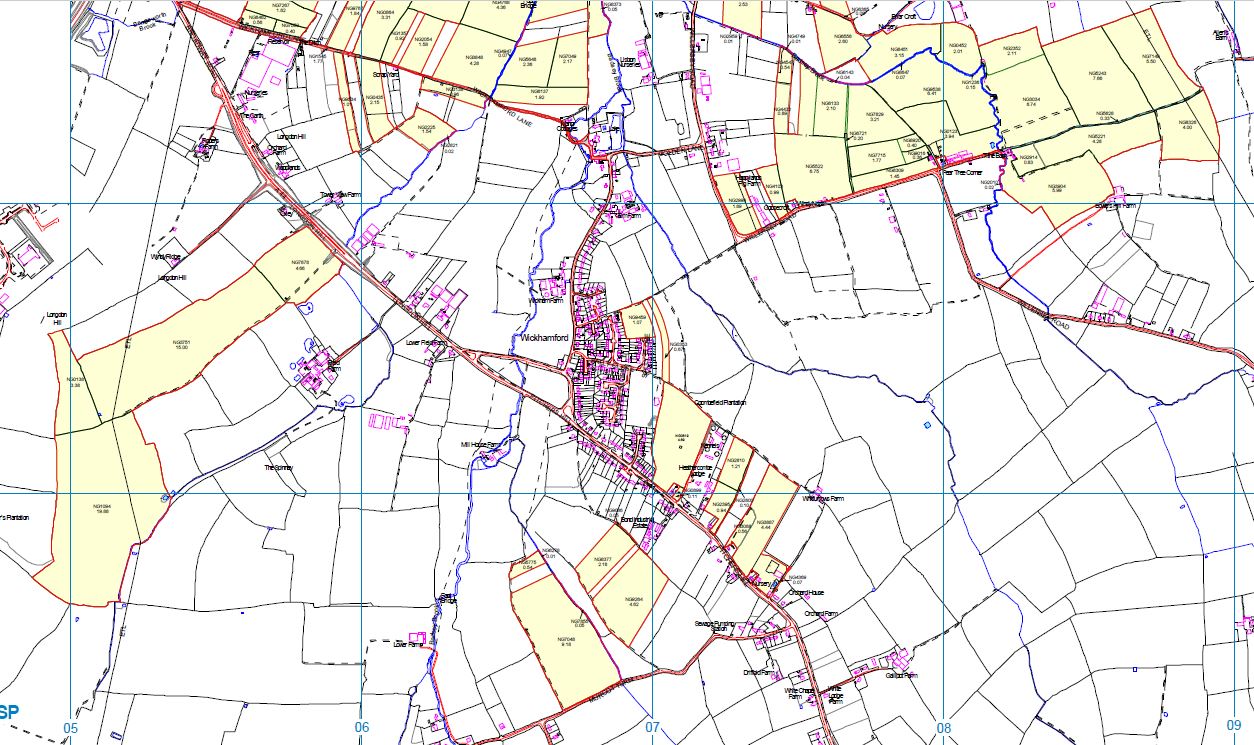 Thanks are due to Lucy Champion for her permission to use the Lord family letters, to Judith Curthoys, Archivist at Christ Church College, Oxford for the details of the sale in 1950 and to Peter Stewart for the 2016 map of the Christ Church holdings in Wickhamford.