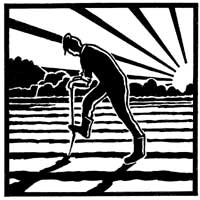 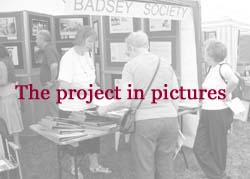 Running from July 2010 to December 2012, The Last Market Gardener was a major village history project led by Maureen Spinks for the Badsey Society. We are grateful to the Heritage Lottery Fund for their support.

The project focused on a 140-year period in the history of Badsey and Aldington when market gardening was the main occupation in the parish. The project begins around 1871 when the first market gardener was recorded in the Badsey census and takes us up to the present day when there are very few people left in the villages still involved with market gardening.

The idea for this project came from two main directions. The late Tony Jerram, the first Chairman of The Badsey Society, was very involved with the asparagus and plum DVDs which we produced. It was he who came up with the working title of The Last Market Gardener for a third DVD. Unfortunately, Tony's untimely death in 2008 put this on hold, but we have now been able to bring his idea to fruition with the skills of Will Dallimore and his team.

Terry Sparrow has been doing research over the last few years about market gardening in the area and we are delighted to publish his book on the subject.

With the publication of the 1911 census, we have been able to see that nearly 80% of households in the village were engaged in market gardening. A major focus of the project was to look in more detail at who the market gardeners were and where they lived. It was boom-time in Badsey a hundred years ago, when many villagers were able to transform themselves from being an 'Ag Lab' to a market gardener who was master of his own destiny; 80 new houses sprung up between 1901 and 1911, reflecting the new-found wealth. And also, with all the knowledge gained about the parish of 200 years ago through our Enclosure Map project, it seemed like a logical extension to study a later period in the parish's history. Through resources like the 1911 census and the 1910-1915 valuation survey, we have learned much about this important period in Badsey's history.

Our quarterly Newsletter went to every household in the parish. It not only kept everybody informed about the project's progress, but also profiled a different market gardening family and a different new housing area in each issue.

Although the main focus has been on Badsey and Aldington, much of our work on market gardening is relevant to the whole of the Vale of Evesham. Several of our activities have involved our neighbouring village of Wickhamford which now has its own historical website.

The Badsey Society gratefully acknowledges a grant of £21,700 from the Heritage Lottery Fund.

Aims of the project

Throughout the afternoon, the Badsey Society stall was a throng of activity. People came to learn about the project, to look at an exhibition of market gardening tools and photographs, and to try their skill at identifying vegetables from their seeds. Visitors bought our publications and joined the society. Of special interest were a series of folders containing profiles of many of the local market gardening families. We were delighted that several people brought along documents and other information which will prove very valuable to the project.

A history of Badsey in 100 objects

The final event of our project took place at Badsey First School on the evening of Saturday 1 December 2012. Titled 'A history of Badsey in 100 objects', Maureen Spinks took us through a lightning tour of the Society's growing archive and museum collection, all of which can be viewed on the new Badsey Society's archive and museum website.

This is a new documentary film about market gardeners and their families in the Vale of Evesham. It is the fascinating story of small family businesses working to make a living from the land, told through interviews and archive footage. It explains the role played by children and land girls, and what it was like in the winter. Local customs for growing and marketing crops like tomatoes and asparagus are described. Historical research sits alongside the day-to-day stories of those involved.

The first public performance of The Market Gardener was at the Regal Cinema, Evesham, on Monday 1st October 2012. It was attended by more than 140 people including the Mayor and Mayoress of Evesham, and many of the people who appear in the film.

The film is available on both DVD and Blu Ray.

Digging for a Living 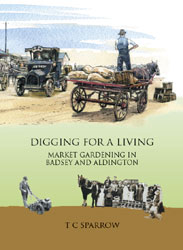 Our latest book, Digging for a Living, was launched at a special event at Badsey School on 21 May 2011. The author, T C Sparrow, told us why market gardening became such a special part of the Vale of Evesham. Brian Smith read his poem Leaving the Land and Professor Nick Evans looked at some of the future directions for market gardening. Will Dallimore ended the evening by showing some market gardening videos and looking forward to the new video being produced for the Last Market Gardener project.

Contact us at history@badsey.net or talk to any member of the Badsey Society Committee.