‘Drysdale’ is a name that can be seen in Wickhamford in four locations. Drysdale Close is by the playing field, there is a commemorative tablet in the Church to Bertha Drysdale and her headstone is in the Churchyard; also Roger Drysdale’s name appears on the Great War memorial in the Church. There is no mention of the family name in any other record in the village, but nevertheless, their story is an interesting one.

Bertha Chamberlain married Alfred Edgar Drysdale in Croydon in 1885. He was the son of an Edinburgh-born physician, John James Drysdale, and his Irish wife, Mary.

At the time of the 1861 census the Drysdale family lived in Great Crosby, Liverpool, and Alfred was aged 6, having been born in the city in mid-1854. The Medical Register of 1859 records John Drysdale as living at 44 Rodney Street, Liverpool, having qualified as M.D. in Edinburgh in 1838. He also became a Licentiate of the Royal College of Surgeons in Edinburgh the same year.

Bertha was born on 15th August 1861 in Lewisham, the daughter of London solicitor John Matthews Chamberlain and his wife, Sarah Jane nee Gilham. They had married in Lewisham in on 13th May 1857 and a year after birth of another daughter, Ada, in 1863, Sarah Jane died. John Matthew Chamberlain continued to live at Hillthorpe, Sydenham, in the Borough of Lewisham until his death on 12th April 1884, aged 60. He had become a Freeman of the City of London in 1857 and he left an Estate worth £44,602/15/9 (equivalent to nearly £4M in today’s purchasing power or nearly £20M in today’s earnings).

Bertha Chamberlain was recorded as a ‘visitor’ in the 1871 census in Reigate, along with her younger sister. She and Ada were both at Newnham Hall Ladies College, Cambridge for the 1881 census. This female college of the University had only been founded a few years previously and she obtained a Class I in the Historical Tripos in 1882, although degrees were not awarded to women at this time.

Just prior to her marriage, Bertha and Ada were baptised, in Croydon, into the Church of England on 15th May 1885, their late parents being Non-Conformists. (Ada married Ernest Edward Darke in 1889; he was a Civil Servant in the Inland Revenue who died in 1934. Their only child, Grace, died unmarried in 1966). Although Alfred and Bertha had married only five years earlier, at the 1891 census she was a recorded as a widow and was living in Birkenhead ‘on her own means’ with two young sons. The family had lived in Cannes, in the South of France, until Alfred’s death. The boys, John Mortimer (4) and Roger Gillespie (3) had been born at Chateau D’Oex, Switzerland and in Cannes respectively. The Medical Register of 1887 lists Alfred Edgar Drysdale as having registered on 15th May 1882, after qualifying as M.B. at the University of London in 1881. His address was 44 rue de Freyus, Cannes. His early death occurred on 4th February 1889 and he is buried in Cannes; the French records give his date of birth as 28th June 1854 and an obituary refers to him as ‘Officier de Sante’. He was the author of two books, Wintering Abroad. Mentone and the Riviera (1884) and a translation of a work originally published in German, History of Homoeopathy (1885). A number of the Drysdale family were involved in homoeopathy and Alfred practised this system of medicine in Cannes.

Bertha was living in Kingston-upon-Thames in 1901 and was back in West Derby, Liverpool, in 1911. At the latter date, both sons were at home on the night of the census where John was described as a College Student and Roger as an Undergraduate at Cambridge. He attended Peterhouse College, University of Cambridge. After her husband’s death Bertha had moved to Liverpool to be near her father-in-law but moved to Wickhamford in 1911, soon after the census. R.G. Drysdale’s name appears in the Valuation Survey in 1913, concerning agricultural land - ‘part of Further Coombe Way’ -, so he may have been renting a piece of this field to the north-east of Pitchers Hill near to The Driffold.

Bertha Drysdale devoted 40 years of her life to good works in the parish, and for most of this time she lived in ‘Brookfield’, next door to the Parish Room in Manor Road. At one stage, during the Great War, the family lived at The Driffold on the Murcot turn off of the Evesham to Broadway Road. This address appears in two documents; it is the one given by John Mortimer Drysdale when he was learning to fly in 1916 and it appears in the Administration of Roger Gillespie Drysdale’s estate in 1915.

Bertha’s younger sister, Ada died on 27th January 1943. They were probably very close, having lost their mother whilst very young, and Bertha died only three months later, on 2nd May 1943. Her obituary appeared in the Evesham Journal of 8th May and described her work with the Sunday School, Mothers’ Union and Girls’ Friendly Society. The local Nursing Association and Hospital scheme claimed much of her time. For years she was a member of the Diocesan Conference, Ruridecanal Conference and Parochial Church Council, eventually becoming secretary of the latter organisation. She was also interested in missions and supported them most liberally.

She paid for a Christmas party for the children of the village for many years.

Bertha Drysdale was buried in the Churchyard and an account of her funeral appeared in the Evesham Journal of 22nd May. Probate was granted to her son, John, and her estate was valued at £2,773 (equivalent to about £107,000 today).

Bertha Drysdale was highly regarded in the village and a tablet was erected in the Church of St John the Baptist in her memory.

Tragedy came to the family in 1915, when Roger died in Lymington, Hampshire. He had attended Malvern College and then Peterhouse College, University of Cambridge (1908-1911) where he studied history. A keen athlete, he played football, cricket, hockey as well as being in the athletics team and rowing.

He enlisted in 1914, and the 19th September edition of the Evesham Journal recorded that he joined up in Evesham but noted that he lived in Hinton. He first joined the 8th Battalion, Worcestershire Regt as a private. In the 8th August 1914 edition of that newspaper, “RG Drysdal” is mentioned as one of a number of motor-cyclists “offering their services” for the War effort. He became a 2nd Lieutenant in the Royal Warwickshire Regiment, having been gazetted on 1st January 1915 into the 4th Battalion. This was a Reserve Battalion based on the Isle of Wight from 1914-1917, which did not see overseas service, so he served mainly on the South coast of England and his sad fate is recorded in the Badsey Parish Magazine of May 1915.

“On all sides there have been expressions of sympathy with Mrs Drysdale in the loss of her son, Lieut Drysdale, of the Royal Warwickshire Regiment. Had his devotion to duty been less his life would, in all human probability, have been longer. Undertaking new duties and responsibilities at a time when he was not even convalescent from influenza, and when he was altogether unequal to work of any description, he became depressed and despondent about ever being able to cope with them. As his academic record and the testimony of his Colonel showed, his natural gifts were such as go to make a capable and efficient officer. It was, in fact, in consequence of his qualifications and in the hope that his health might improve that he was urged by his Colonel to retain his commission when he asked to be relieved of it. Unhappily, he never recovered from the effects of the initial strain and the burden eventually proved more than he could bear.” 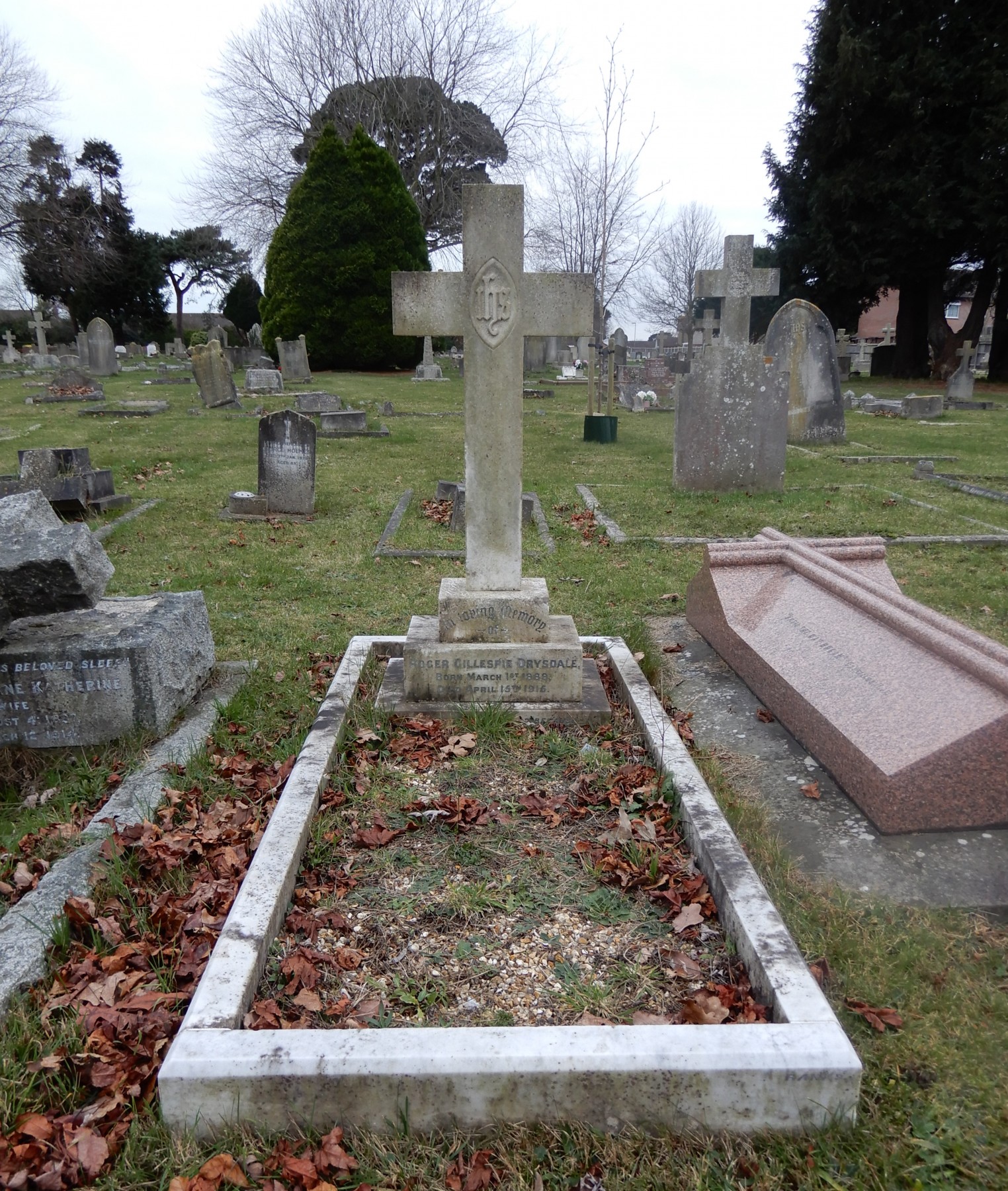 He was buried with full military honours in Lymington (grave no 2466), in a service conducted by the Vicar of Wickhamford, Rev. Allesbrook. There was a firing party from the Warwickshire Regt, with three volleys fired over the grave, and then a bugler sounded the last post. There was a Memorial Service for Lieutenant Drysdale at Wickhamford on April 20th 1915. He had died on 15th April and his estate went to his mother and was valued at £6,240 (equivalent to around £500,000 today).

John Mortimer Drysdale also attended Peterhouse College (1905-1909) where he studied classics and then a further course on economics., He had previously been educated at Shrewsbury School. He joined the Royal Flying Corps and survived the War. The London Gazette of 21st February 1916 lists his appointment as a 2nd Lieutenant in the R.F.C. An exploit of his, in France, is recorded in the Parish Magazine in September 1916.

“Lieut J M Drysdale, who was wounded in an air-fight behind the German lines on Aug 26 is, we are glad to hear, rapidly recovering. He received his wound when at an altitude of 2000 feet, but managed his descent so skilfully that he alighted at the spot from which he started. He was warmly commended by his CO for his gallantry and skill.”

Further reports of his service appear in April 1918 – “Hearty congratulations to Lieut J M Drysdale on his "mention" in the despatch of March 13th” - and in September 1918 – “Lieut J M Drysdale is now engaged in the agreeable but responsible task of transporting distinguished passengers to and from France.” The last mention of him in the Parish Magazine is in June 1919 – “Capt J M Drysdale, late of the RAF, has received from Sir Woodman Burbidge, managing director of Harrods Stores, a gold cigarette-case in commemoration of the "first commercial flight". This took place on March 1 1919 when Captain Drysdale piloted Sir Woodman to Brussels.” Although the Parish Magazine of 1919 refers to him as ‘late of the RAF’, The London Gazette of 24th June 1921 lists his appointment as a Flying Officer in the R.A.F. (presumably, as a reservist). 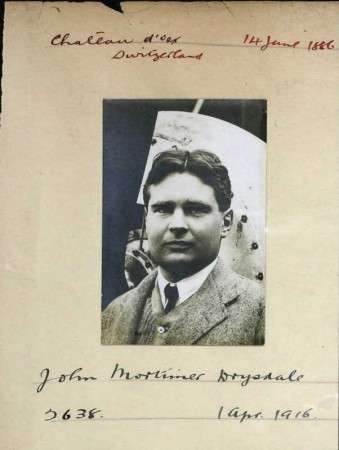 John Mortimer Drysdale married Enid G. Openshaw in Hampstead in 1923 and the couple had two sons, John G. and Richard J. in Hendon in 1925 and 1927. The London Gazette of 21st February 1939 lists him as being appointed as an Acting Pilot Officer in the Administration and Special Duties Branch of the R.A.F. At the time of his mother’s funeral in 1943 he had the rank of Flight Lieutenant. John Mortimer Drysdale died in Barnet in 1970.

When new housing was built in Wickhamford in the 1960s in recognition of her contribution to village life, one of the roads was named in Bertha’s honour – Drysdale Close.