Emily and Mary Empey, were first recorded in Wickhamford at the 1911 census.  They were both listed as market gardeners and lived at the present-day 10 Pitchers Hill.   Emily was 55 years of age and her younger sister, Mary, was 41, but the latter was entered as head of the household.  They had been born in Queen’s County. Ireland (now Co. Laois) and stated that they were ‘British subjects by parentage’.  (In that year there were only 93 persons with the surname ‘Empey’ in the England and Wales census). They do not appear in the 1901 census in England, but some of their earlier history can be found.

Both died in Wickhamford and their gravestone records that their father was William Empey and that they were from ‘Ballinclea, Stradbally, Queens Co’ (see footnote).  In the Ireland City & Regional Directories, of 1885 to 1890, they appear as ‘Empey, The Misses Mary & Emily, ladies’ school, 76 Harcourt Street, Dublin’.   By the time of the 1901 census, they had moved to Ayr, Scotland, and were both employed as governesses in the household of Clerk of Works, William Morrison and his wife, Jane.   Living at home were six Morrison children; ‘Maria’ was 36 and Emily 40 years old and both were unmarried.

A move to Wickhamford

The Empey sisters move to Wickhamford from a career in teaching in Ireland, and then Scotland, appeared to be a strange decision.  The connection was Helen Lees-Milne of Wickhamford Manor.  Emily Empey had, a one time, been a governess of Helen Bailey, as she was before her marriage to George Lees-Milne in 1904.  After both of Helen’s parents had died, by 1896, she and her sister went to live with the Morrisons.  She was not present in the household for the 1901 census but may have been away at finishing school ?  The sisters were probably looking for a change by 1908 and Helen suggested a move to Worcestershire.

The 1915 Valuation Survey in Wickhamford, recorded that the Empeys' Pitchers Hill house had three bedrooms and was about 20 years old. A bathroom has recently been added to the house and it had a water supply. The property was owned by George Lees-Milne, who may have purchased the house specifically for the Empey sisters.  There was a little over one acre of land attached, that had a heavy clay soil and Prolific and Victoria plums were being grown.

Both sisters were on the Electoral Register of 1924 at the Pitchers Hill address and were recorded as ‘Maria’ and ‘Emily Elizabeth’.  Mary Jane Empey died in Wickhamford in 1938 and was buried in the churchyard on 15th March.  The Parish Burial Register was not being keep undated by the vicar at this time, but her age was later recorded as 80.  ‘Emily Elizabeth’ Empey was recorded in the 1939 Electoral Register at the previous address but by the time that the 1939 Register was drawn up later that year, she was living with Bertha Drysdale at Brookfield Cottage, Manor Road.  Her date of birth was given as 28th September 1863, a date that it slightly at odds with those given in the censuses (which seem to vary in their accuracy).  Under ‘occupation’ she was said to be of Private Means. 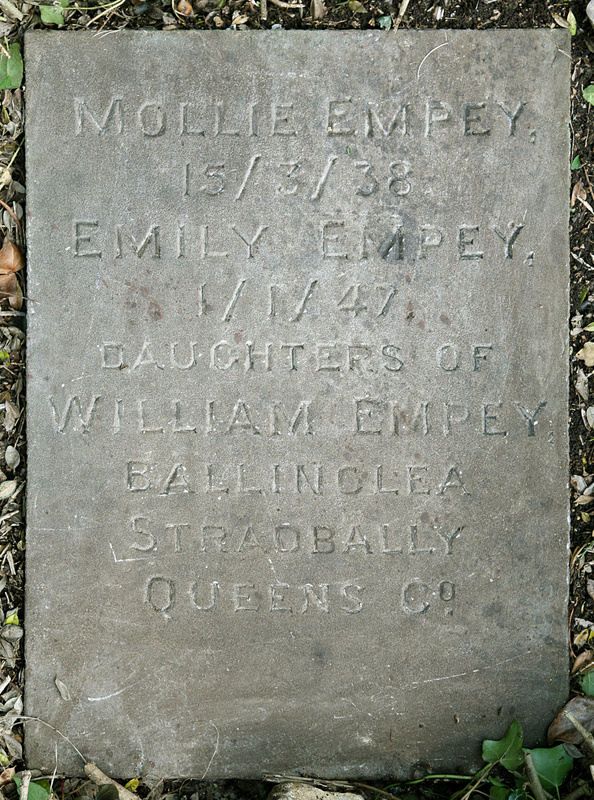 Emily died on New Year’s Day 1947, aged 84, and was buried on 6th January.  Her full name was entered incorrectly in the Burial Register as Emily Dorothy Empey. The memorial stone to both sisters was probably made after Emily’s death and gives her sister’s name as ‘Mollie’.

According to an obituary in the Evesham Journal, Emily Empey had been ill for about a week before her death.   At her funeral service, the Wickhamford Church choir sang ‘Abide with me’ and the ‘Nunc Dimittia’.  An appreciation appeared in The Evesham Journal of 11th January 1947 mistakenly referred to her sister as ‘Milly’.

The Empey sisters had been teachers in their early years, first in Dublin and then in Ayr, before making a complete change of life in 1908, when they moved to Wickhamford.  When Mary died, in 1938, she left £323 and when Emily died, her estate was valued at £1,784. Unfortunately, no definite photographs of the sisters have been found to date, but see 'Footnotes', below.

The address on the Empey sisters’ gravestone for their father refers to Ballinclea House, Stradbally, a town in Co. Laois, west of Dublin.  A family tree on ancestry mentions a William Empey, b. ca 1825, who married Matilda Furney in June 1850.  Their children include Robert James Empey and a Maria and an Emily.  Robert’s daughter, Matilda, was born in Ballinclea, so this may be the family origin of the sisters.
Regarding photographs of the Empey sisters, three group photographs are on the website which are from the period when they lived in Wickhamford and they may be present.  One is general view of a garden party at Field Farm in 1909 and another of a group of ladies on a day trip to Bournemouth in the 1930s.  In the latter, there a number of unidentified ladies. The most likely image of Emily Empey could be in a photograph from 1940 of a group of ladies which appeared in the local newspapers in April 1940.  They were helping the WVS and were photographed outside of Wickhamford Manor.  In the centre of the group is Bertha Drysdale, and the large lady beside her is almost certainly Emily Empey, who was living with her at this time.  May Sladden, in a letter in 1914, mentioned some clothes that ‘might fit the big Miss Empey’, and she may have been referring to Emily. 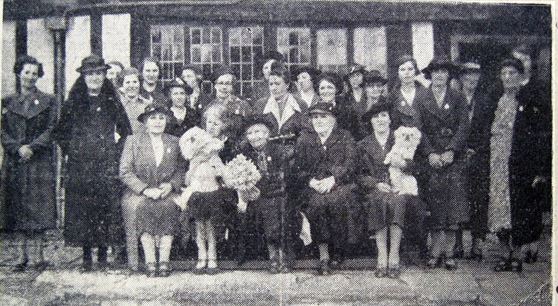