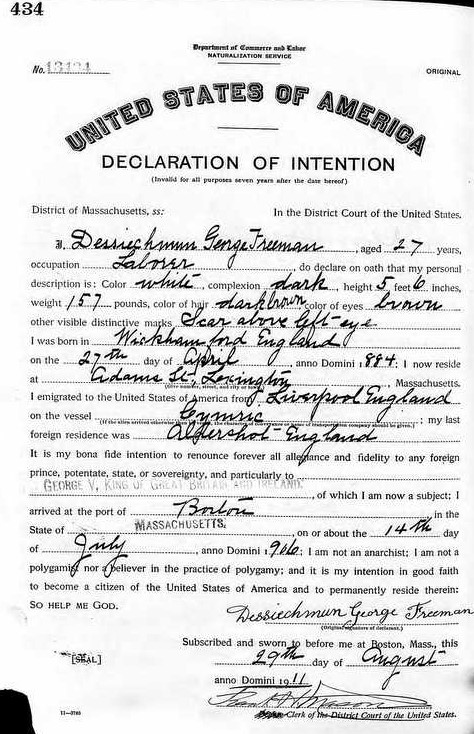 On 29th August 1911, Dessiechmun George Freeman signed a Declaration of Intention form (right).  This was a form stating that a person intended to renounce allegiance to a foreign country and become a citizen of the United States of America.  He is of interest because he stated that his place of birth was Wickhamford, England.   Other information given on the form, reproduced below, was his date of birth as 27th April 1884, and his occupation as a ’laborer’.  He had arrived in the USA, at Boston, on 14th July 1906 and was currently residing in Adams Street, Lexington, Massachusetts.   He stated on the form that he had arrived in the USA aboard the SS Cymric and his last UK residence had been Aldershot, but this does not tally with the information on the ship his family sailed on to the USA.

A check of the Wickhamford Baptismal Register showed no entry for a man of this name (although a ‘George Freeman’ had been baptised in 1877, the son of Felix and Charlotte).

A search of the births, marriages and censuses in England revealed no signs of this family, but looking for the Christian names only, and the dates given of the children’s births, led to the family being found, but with the surname of ‘Pickering’.

In mid-1846, Thomas Pickering had married Ann Freeman, in the Evesham area.  They appear in the 1861 and 1871 censuses with twelve children, including George Pickering, born c1853. They were living in Elm Road, in rooms at No. 25, in 1901 and his occupation was given as a brick yard labourer.  They shared this address with two other families and it was probably the property know as 'Ivy House', pictured below. Thomas Pickering died in 1907, aged 81, and his wife, Ann, predeceased him in the first half of 1905, aged 77.  (See footnote for background information on Thomas Pickering's family.)

Returning to entries in the Wickhamford Baptism Register, now knowing of the family surname change, there are two entries on 8th June 1884 of significance.   Thomas Henry and ‘Decimus George’ Pickering, sons of George and Jane Elizabeth Pickering, were both baptised.   Thomas would have been about 4 years old, based on census information from 1881, and ‘Decimus’ was new-born.   In the National Register of Births, Decimus George Pickering was not recorded until the first quarter of 1885, so his father was slow with the registration.

It was just over a year after his mother’s death, in 1905, that George Pickering and some of his family emigrated to the United States.  Thomas Henry Pickering, baptised in Wickhamford in 1884, had died in Evesham, aged only 21, in 1902.

From Pickering to Freeman

At some point before their leaving England and their eventual applications for American citizenship, ‘Pickering’ was changed to George’s mother’s maiden name of ‘Freeman’.  There is no known reason for this course of action, but see footnote for a possible explanation.

A passenger list for the 3rd Class accommodation aboard the SS Oceanic, sailing from Liverpool on 4th July 1906, includes a family with the surname of ‘Freeman’.   Those listed are – George Freeman, aged 50, a farmer; Grace Freeman (48), ‘wife’; George Freeman (28), a farmer; Alfred Freeman (14), a labourer; Maggie Freeman (11), a child and Lucy Freeman (10), a child.  Their last address in England was given as Tewkesbury and the ship arrived in New York on 12th July.  The manifest states that they were going to join a friend, George Grove, of 10 Chelmsford Place, Netherton, Lawrence (George Grove had emigrated from Evesham in the 1890s).  Mystery surrounds their journey to America.  Initially their names were crossed out, but then against the entry it was written, “On board – stet”.

This is certainly the family concerned, but there are a number of differences between the last census in 1901 and the passenger list of 1906.  The ages of the family are not all correct.  George’s wife’s name should have been Jane Elizabeth or Elizabeth Jane, but for some reason is down as ‘Grace’; possibly this was a pet name.  The George referred to was presumably Dessiechmun/Decimus George, born in 1894, as this would make him the right age, rather than the second child called George who had died in 1896.  But this does not stack up with his Declaration of Intention form which said he had arrived on SS Cymric on 14th July 1906 (the only Freeman on SS Cymric on that date was a 21-year-old servant, Bessie Freeman).   ‘Alfred’ was born Alfred Sidney (1892-1974), the latter name being used in the 1901 census; ‘Maggie’ was probably the name the family called Eleanor Hilda May (1894-1985); Lucy Gladys (1895-1981), the youngest in the family, was recorded with the correct age.

Ernest William Freeman, who was stated in the 1901 census to have been born in Wickhamford, also went to the USA.  When applying for naturalisation in 1912, he said that he, too, arrived in New York on 12th July 1906 on the Oceanic, though he does not appear to be on the ship’s manifest with the other Freemans.  Ernest died in Maynard, Massachusetts in 1969.  He had married Emma Margaret Perry (1873-1962) in Vermont, in 1922.

Life in the United States

An undated Registration card exists in the name of ‘Dessiemun George Freeman’ which gives his address as 16 Muzzey Street, Lexington and his wife’s name as Lydia.  He was working in the U.S. Navy Yard in Boston.  The signature is the same as in the earlier document, but he has spelled his name slightly differently.  His age is given as ‘58’, so the card would be from about 1942.  Another document records his occupation as a ship’s fitter.  Other US directories give his occupation as a caretaker and a gardener (Lothrop’s Lexington Directory - undated).  The latter occupation was taking him back to his Evesham roots.  He did not serve in the US Forces in the Great War, but his brother Alfred Sidney Freeman enlisted on 28th March 1918 and served until 10th May 1919. 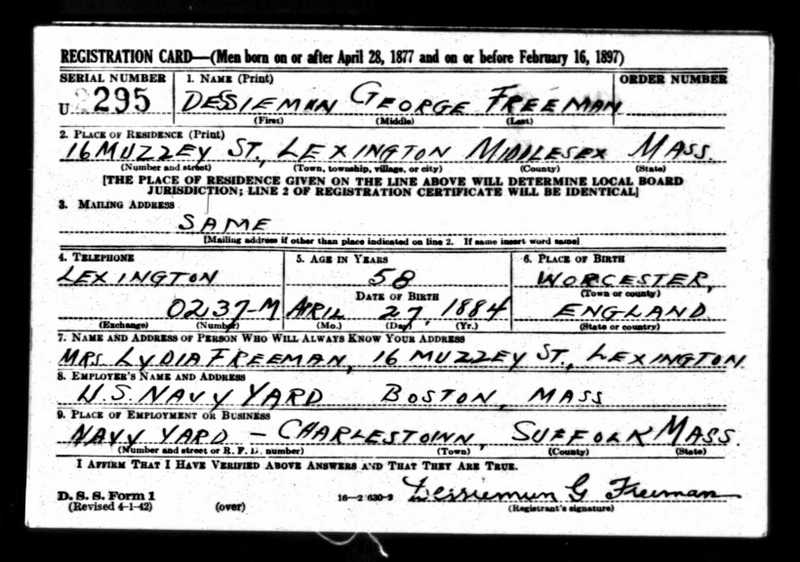 Thomas Pickering was a son of George Pickering and Dinah Parsons, who married in Bengeworth, Evesham, on 21st January 1821.  They had three children baptised in Bengeworth Church - Ann (24th March 1822), who went on to marry a butcher, Frederick Partington, in 1849; Thomas (1st March 1826), who married An Freeman in 1846 (see main article, above) and Charles (10th November 1823).  For some unknown reason. Ann and Thomas were baptised, in Bengeworth, for a second time on 27th December 1840.

To date, no record has been found for the death of George Pickering, although Dinah was recorded as a widow in the 1851 census - she died in 1865.  Intriguingly, in 1848, a George Pickering was on trial in Worcester and he was found guilty of larceny and sentence to seven years transportation - presumably to Australia.  If this was the man concerned with this story, perhaps this criminal record was what prompted Thomas Pickering's son, George, to change the family name when emigrating to the United States in 1906.

Thanks are due to Peter Stewart for locating the information in the footnote.