The death of Bamber Gascoigne at the age of 87 on 8th February  2022 has been a main story-line on news bulletins and in today’s newspapers. He was well known as a writer, documentary maker and broadcaster, and most people will remember him as the popular quizmaster of TV’s University Challenge for 25 years.  His name was synonymous with several catchphrases that are still used to this day:  “starter for ten”, “fingers on the buzzer” and “I’ll have to hurry you”.

But what is less well known was that, for a short period of time, he was a resident of Wickhamford during the Second World War.

Arthur Bamber Gascoigne was born in London on 24th January 1935, the eldest of three children of Ernest Frederick Orby Gascoigne, a businessman, and Mary (“Midi”) Louisa Hermione O’Neill.  They lived at 6 Egerton Gardens, SW3.  At the time of the 1939 Register, shortly after the outbreak of war, Mary (and presumably the children) was to be found at Wallsgrove House in Essex. Ernest had been commissioned in the Royal Artillery in November 1938 and would have been away on war service.

The Move to Wickhamford

The Gascoignes probably decided that war-time London was not a place to raise a young family, and thus sought refuge in the countryside.

The reason why they went to Wickhamford was because Midi Gascoigne was a great friend of James Lees-Milne (known as Jim) who had grown up at Wickhamford Manor.  Jim, the architectural historian, novelist, diarist and biographer who worked for the National Trust for many years, was three years younger than Midi.  Michael Bloch in his biography, James Lees-Milne:  The Life, describes Midi as Jim's closest female confidante.  They had met in Rome in 1930.  Even after her marriage, Midi continued to see much of Jim and remained one of his closest female friends throughout his life.

Jim’s father, George Crompton Lees-Milne, owned several estate cottages in Wickhamford, and it was one of these, the thatched Corner Cottage on the corner of Main Street and Golden Lane, that Midi brought her family to live to escape the London bombs.  This was most likely in the autumn of 1942, when Bamber was seven and his sister, Veronica, was four (their younger brother, Brian, had not yet been born).  Bamber was a pupil at Sunningdale School in Berkshire so would have been away from home during term-time.

On 24th October 1942, Mrs Gascoigne advertised in The Evesham Standard  for a Cook-Housekeeper:

At a whist drive in December 1942, in aid of the Prisoner of War fund, Mrs Gascoigne presented the prizes in the unavoidable absence of Mrs Lees-Milne.

How long the Gascoignes remained in Wickhamford is unknown.

Over half a century after leaving Wickhamford, Bamber Gascoigne returned to the village where he had lived briefly during the war.  As a former resident of the village, he was invited to open a fete at Wickhamford Sports Club on 29th June 1996, in order to raise funds for Wickhamford Play Area.

It was whilst visiting the village that Bamber, accompanied by his wife, Christina, and sister, Veronica, asked if he could visit his childhood home.  Corner Cottage was then home to Barry and Simone Hancox. They were delighted to show him around.  Simone says:  “We have very happy memories of that day when Bamber was absolutely charming to us all and told us about his and his sister's time living at Corner Cottage. He was very interested in the children and spent a lot of time talking to Edward in particular and asking him all about himself too. It's a memory that we will always treasure.”

After the visit, Bamber Gascoigne wrote to thank the Hancox family for allowing them to see round the house and to say how interesting it had been to them all. He also sent Edward a copy of his newly published book a few months later, which he had discussed with Edward during his visit - even though Edward was only nine at the time!  Sadly the book was a victim of the floods in 1998, when Corner Cottage suffered badly.

In 2017 and 2018, Tom Locke, knowing that Bamber Gascoigne had resided in Wickhamford for a short time during the war, exchanged several emails with him.  He first asked if he recollected the air crash in 1941, but he replied that he didn’t arrive in the village until 1942 and added:

Glad to hear you live in splendid Wickhamford. What a wonderful church the village has.

Knowing that Bamber’s father had been in the Royal Artillery during the war, Tom then asked him about his war-time service.  Bamber supplied a photograph of his father in Royal Artillery uniform for the World War II section of this website, explaining why, in some articles, his father’s name appears as Derrick/Derek:

Good to hear from you again. Your page of Wickhamford men in the war is excellent and I am delighted my father is added to it. With some difficulty I have found a battered photograph of him in his army uniform and will email it to you after this. His name to all who knew him was Derick, the second half of his middle name, Frederick.

In exchange, Tom sent him a photograph of "Gascoyne's Cottage" (sic) which featured in the photo album of Joan Galloway, who was a Land Girl at Wickhamford Manor. 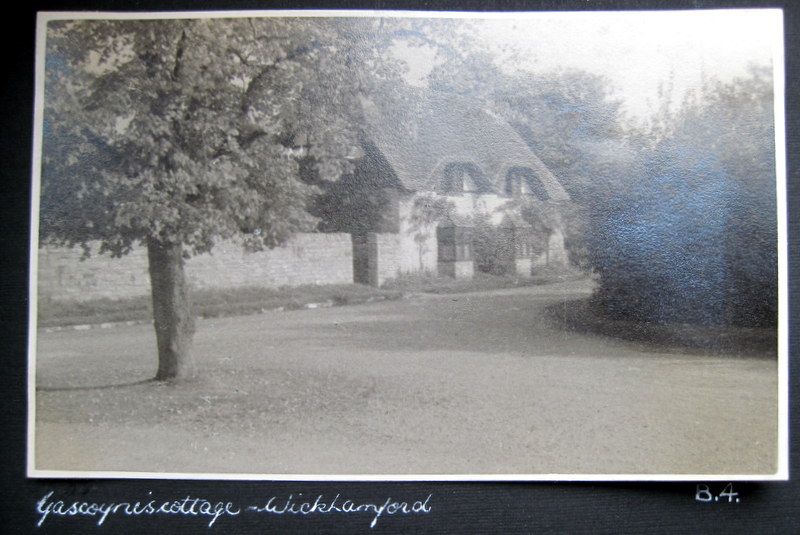 Bamber’s reply to receiving the photos was:

How splendid to have discovered Joan and her album. She looks amazing for her 90s (and what a wonderful jersey!).   And many thanks for the very evocative photo of Corner Cottage.  Happy memories.

The “wonderful jersey” which Bamber referred to was one which Joan had been wearing when Tom, together with Val Harman, had been to visit her to see her collection of Land Army photos.  Photos of Bamber Gascoigne often show him wearing a thick, woollen jersey and some of the obituaries in this morning’s newspapers feature a casual photo of Bamber in a woollen jersey.

Although his stay in Wickhamford was brief, it is obvious that Bamber Gascoigne had fond memories of his time at Corner Cottage.