Norris Haines, often known by the nickname ‘Buckley’, was a chauffeur and gardener to the Lees-Milne family of Wickhamford Manor and then Hody’s Place. He worked for the family from 1906 until Helen Lees-Milne’s death in 1962.

Norris was the son of William and Harriet Haines, born on 9th July 1889 in Aldington and his father was a farm labourer. By the time of the 1901 census he was 11 years of age and living with widowed mother, a laundress, in Aldington. In 1910 he married Florence Jane Harris and a year later, for the 1911 census, they were living in Badsey with their five-month old daughter, Hilda Doris. At this time his occupation was given as ‘Chauffeur (Domestic)’. A second daughter, Margaret, was born in 1913. After service in France and Italy in the Great War, in the Army Service Corps, he had moved to Wickhamford to live in ‘Whytebury’, Manor Road. A son, John Thomas William (‘Jack’) was born on 24th April 1920. (He was destined to be a professional footballer, who played once for England, scoring two goals against Switzerland in 1948.) 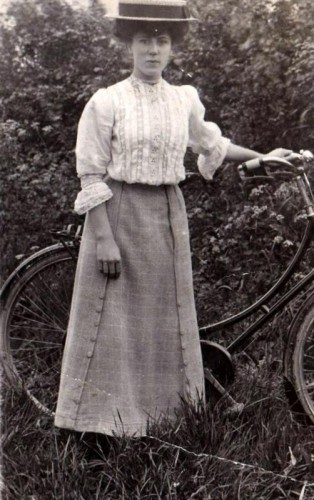 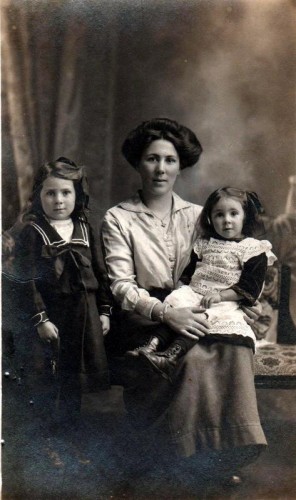 Florence Jane Harris, aged 17, before her marriage to Norris Haines in 1910 and with her two eldest children, Hilda Doris and Margaret (‘Peggy’). 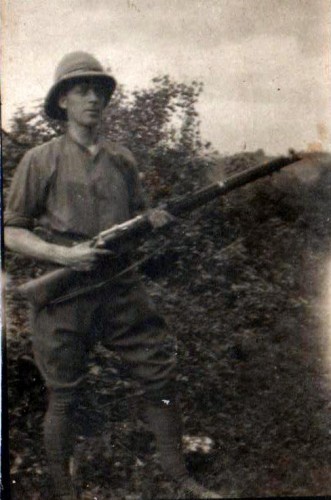 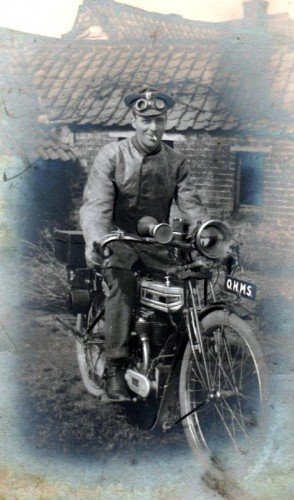 Private Norris Haines with rifle in Northern Italy and on a motor-bike in France during the Great War. 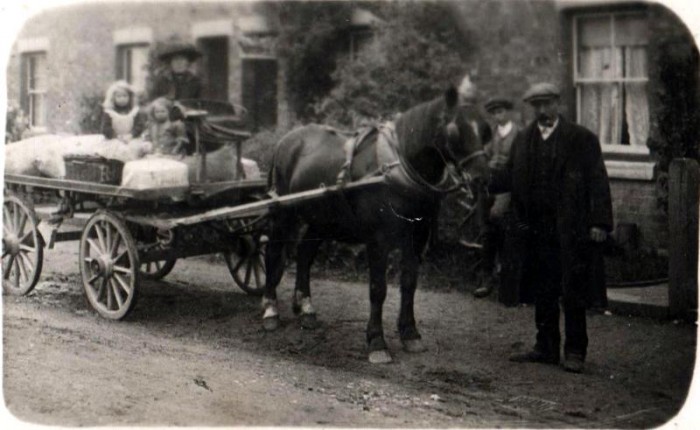 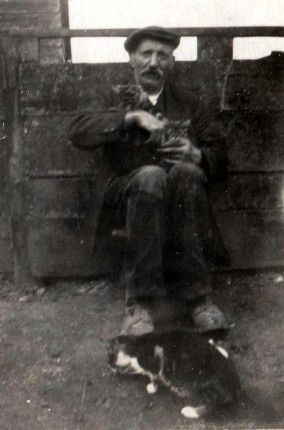 Florence’s father, market gardener David Harris, moved the Haines family and their possessions from Bullybrook Cottages, Badsey to Wickhamford, during the Great War, with his horse and cart. He is also pictured on the right with his cats.

Norris Haines wrote the following postcard to his wife on 23rd July 1917 when he was on the Western Front. The field censor passed it, but he seems to have scratched out the location of the village on the postcard for security reasons. 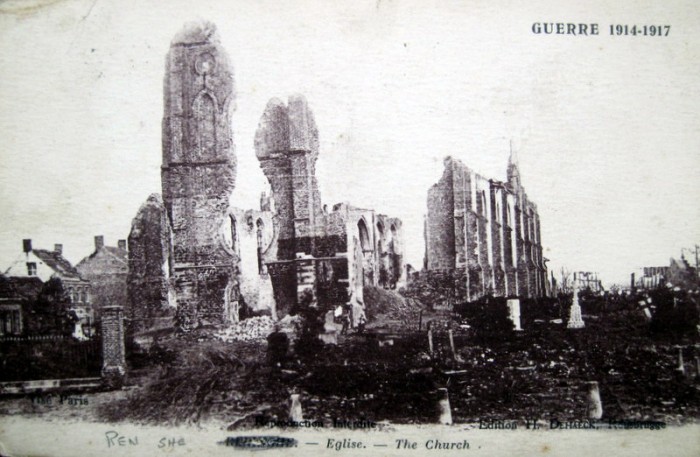 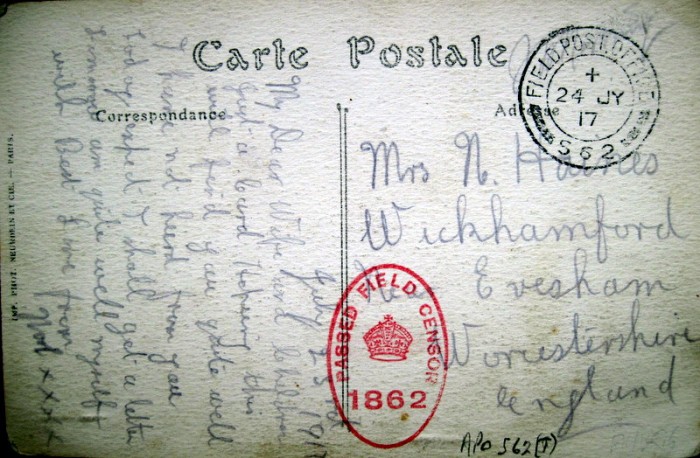 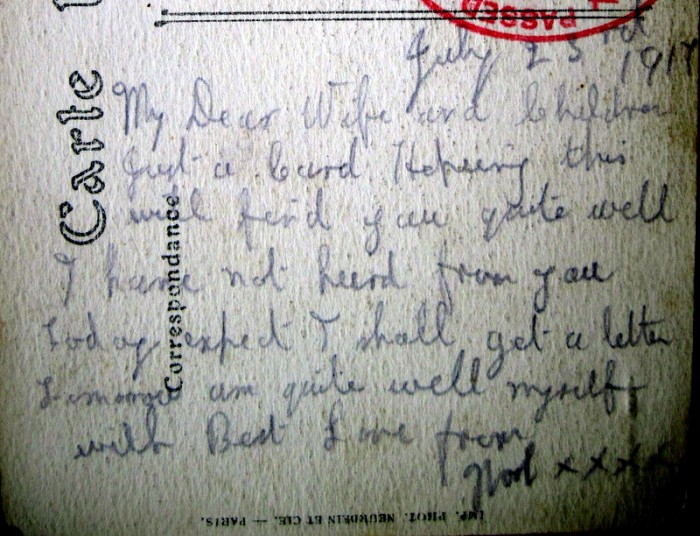 A further card has recently come to light on ebay (February 2019).  The card is dated 21st November 1915 and is from Norris to his wife, Flo.  The picture is of a church, but the censor has scratched out the location; however, it can just be made out as Amiens (and the censor had obviously not noticed that it said Amiens in small writing at the bottom).  The writing is very faded, but the words can just be made out:  “Dear Flo, Just a card to let you know I am A1, have had no post for 4 days.  Hoping you are all well at home.  With best love to all, I remain you loving husband, xx Nod xxx.” 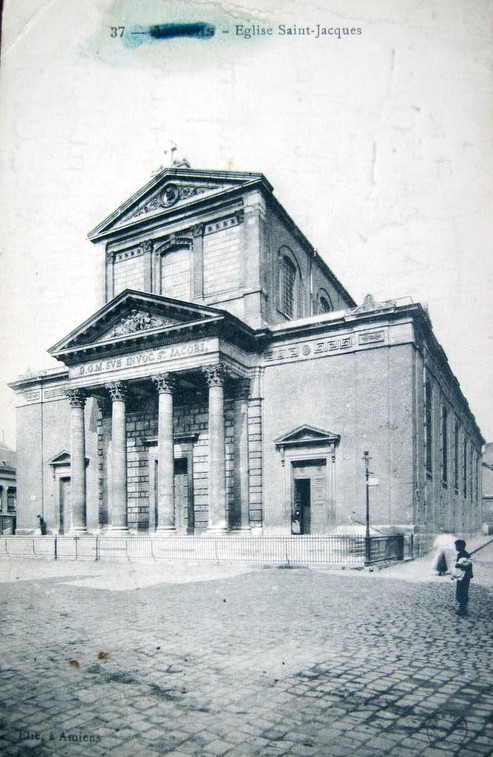 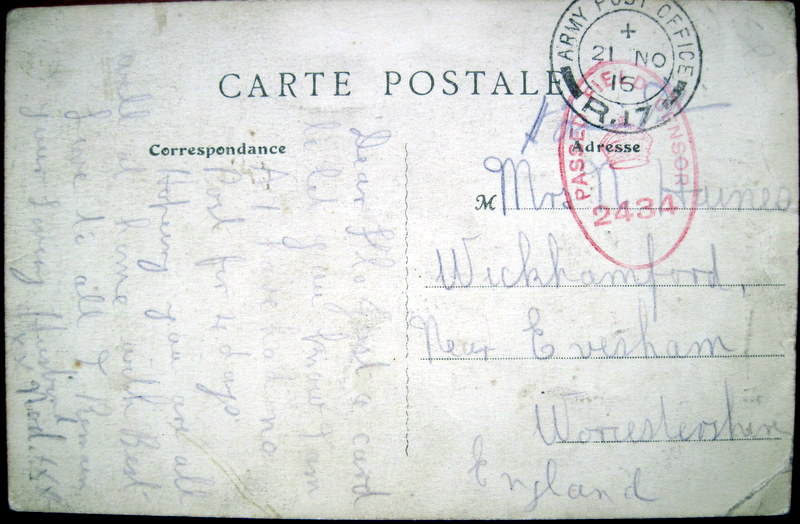 Acknowledgements: We are very grateful to Norris Haines’s grandson, John Haines, for supplying almost all of the photographs used here and the information accompanying them. The first postcard sent from France was kindly supplied by Jim Heath.  Tom Locke supplied the second one.