John and Alice Idiens lived at Wickhamford Manor for a short period around 1901. He had an interesting life in the area and eventually emigrated to British Columbia, Canada.

At the time of the 1861 census, the Idiens family were living at Stratford Place, Camp Hill Railway Station, Aston, Birmingham. In between the birth of the youngest child in 1867 and the 1871 census, they moved to Evesham, where John was Station Master for the Midland Railway.

John Idiens Junior married Alice South from Tettenhall, Staffordshire, in 1879. They had fours sons and three daughters, all born at Evesham - Harold John (1880-1953), Albert William (1883-1953), Alice Marguerite (1885), Edith Mary (1887-1981), Walter Cyril (1888-1973), Doris Ruth (1889) and Stanley South (1891-1980). At the time of the 1881 and 1891 censuses, the family were living in High Street, Evesham. In 1881, John’s mother was staying with them, and they had a servant and a nursemaid for their baby son and John was described as a coal merchant. By 1891 he was described as a merchant, and he employed a Governess and two servants for his growing family. John’s widowed mother-in-law, Mary South, was also staying, presumably in anticipation of assisting with the birth of their last and final child, Stanley. There is a record of the birth of Elsie Mary Idiens in Evesham in 1882 and the death of that child in 1886 and this could be another daughter of John and Alice.

At about the end of the 19th century, they became tenants at Wickhamford Manor (all the children were there at the time of the 1901 census, except Alice and Edith who were staying with their aunt, Mary South, in Wolverhampton). The Idiens family became involved in the local community. The Parish Magazine of November 1899 records that Mr J Idiens promised money for Wickhamford Church fund. In November 1900, Mrs Idiens was involved with a Sale of Work for Wickhamford Church and in March 1905 a subscription for a dance for the Clock Fund. In January 1902, their eldest son, Harold, was mentioned as organist at Wickhamford. (A war report of 1915 reveals that their second son, Albert William, was also once an organist). In April 1905, their third son, Walter Cyril, received confirmation. In April 1910, Mrs Idiens presented 12 volumes to the Parish Library and John Idiens was a manager at Badsey School from 1902-1904. It is assumed they lived at Wickhamford until 1906 when George Lees-Milne bought the Manor from J P Lord’s Trustees.

The registered address of the Company was 91 High Street, Evesham.

John Idiens is said to have dabbled in many different businesses but eventually lost all his money. The story is told that he bought a lot of land off Christ Church College and defaulted on some or all of the payments. The following notice appeared in The London Gazette of 30th April 1901 - 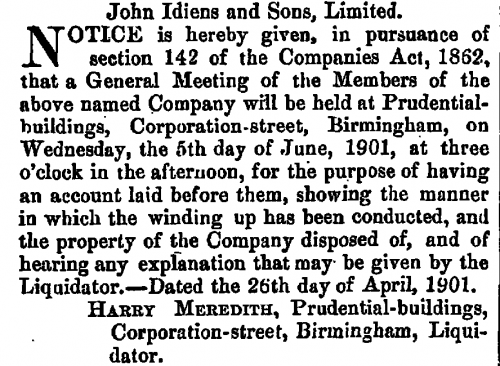 John Idiens had taken out a lease on Bowers Hill Farm, Willersey Road, Badsey in 1898, but his occupation in the 1901 census was still given as ‘Coal Merchant’. In 1905, he bought Bowers Hill Farm from Henry Panting Byrd.

John Idiens was mentioned in Rural England: Being an Account of Agricultural and Social Researches Carried Out in the Years 1901 And 1902, by H Rider Haggard.

With the growing population involved in market gardening in the area, John Idiens decided to build fourteen semi-detached cottages with frontages on the Willersey Road at Bowers Hill. On 18th May 1905, the Company borrowed £7,000 to finance the scheme form W.B. Cregoe-Colmore. He did not manage his own affairs due to ill-health, so the mortgage was in the names of his Trustees, J.C. O’Neal and W.J. Haley. The application was for a total of £8,000 with £500 to be deferred until seven of the cottages had been built and £500 held over until completion of the project. In the event only seven of the cottages were built and it seems doubtful if more than the original £7,000 was ever advanced.

On 18th October 1905 the Company entered into a contract with the General Land and Drainage Improvement Co. to install a new water supply to the cottages at a cost of £2,283 3s 0d, payable over 40 years at £55 7s 7d every half-year. Other paperwork from the time shows that the occupier of the land to be developed was Harold Idiens and the Avon Orchard Company. Apart from Bowers Hill, the Idiens family were also involved in building a terrace of fourteen houses and a smithy on the Willersey Road on the Badsey side of Bully Brook.

It is difficult to know how the Idiens’ building venture at Bowers Hill could ever have been viable as interest alone on the original mortgage was £280 per annum and it is unlikely that the ten cottages would have yielded more than £13 per annum each in rent.

Things came to a head in 1911 when W.J. Halsey and his co-Trustee A.A. Barnard (who had replaced the now deceased O’Neal) paid off the drainage company loan on 22nd August and then commenced action against John Idiens in the Chancery Division of the High Court of Justice (no. H2865 in 1911).

The Company was given time to pay, but did not and so on 17th September 1912 the Court made an order “….in an action in which W.J. Halsey and A.A Barnard were plantiffs and John Idiens and Sons Ltd and the United Counties Bank Ltd were defendents, whereby the defendents were foreclosed from all rights…….of the Bowers Hill Estate”.

Four years later John Idiens and Sons Ltd was dissolved and its name struck off of the Companies Register (London Gazette, 31st October 1916).

Life after Wickhamford Manor and the Idiens family move to Canada

By the time of the 1911 census, John and Alice Idiens were living in Poole, at a house on The Promenade called Kiabra and John was described as of “private means”. Four of the children lived at home - Albert and Cyril who were market gardeners, Stanley who was a bank clerk, and Edith.

John and Alice Idiens emigrated to Canada in 1913, following in the footsteps of some of their children. Walter Cyril had left in October 1912 and Stanley in December 1912; it is thought that Albert and Alice had also gone. On 2nd April 1913, John and Alice boarded Royal Edward at Bristol, bound for Halifax, Nova Scotia, together with their daughters, Edith and Doris who accompanied them. They went to live firstly at 2625 Roseberry Avenue, Victoria, British Columbia, which is on Vancouver Island. They then moved to the town of Comox where Alice Idiens died in 1933 and John in January 1939 and is buried in Courtenay, about 3 miles from Comox.

The children of John and Alice Idiens

He joined the Canadian Army Service Corps (No 200012) on 16th October 1916. He had been a bank clerk prior to enlistment and served with the 1st Motor Transport Base Depot and then with E Battery Anti-Aircraft Artillery. His service details are not known, but presumably included time in France.

Acknowledgements: Thanks are gratefully given to Maureen Spinks for most of the background material on the Idiens family, to Terry Sparrow for the section on the Idiens venture into building at Bowers Hill and to Pat Goldstraw for pictures of the family in Canada and in the Army. Some photographs were also kindly supplied by Walter Cyril Idiens’ daughter, Rosanne Richards of Canada – see also Appendix.

Amongst the photographs supplied by Rosanne Richards were two of probable Idiens ancestors but whose identities are now lost in the mists of time. It is possible that they are John Idiens’ parents, John and Sophia Idiens. Unfortunately, the picture of the gentleman was copied at an angle, which gives distorted images, but are nevertheless interesting.