Doug Pethard had all to live for.  A local Badsey lad made good, he had achieved success both at school and university and on the sports field, he was a devoted member of St James’ Church and had recently embarked on a career in teaching.  But one fateful evening in August 1937, this all came to an end when he was drowned in a lake in Austria.  He was aged just 23. 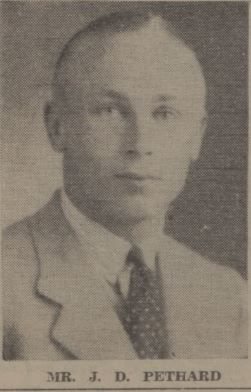 John Douglas Pethard, known as Doug, was born at Badsey on 27th October 1913, the only son of Joshua John Pethard and his wife, Elsie Mary (née Hardiman).  Although his father had been born in London, the Pethards were from an old Badsey family, Doug’s 4xgreat-grandfather, Thomas Pethard, having settled in Badsey in the 18th century.

Doug lived with his parents at West Lea at the end of Old Post Office Lane.  His father, Joshua, was a market gardener, in partnership with his uncle, Bill Hardiman, whilst his mother (known affectionately as Moko) built a happy home.  Doug’s cousin, Doreen Moore (née Ballard, 1922-2005), wrote about family members in a memoir of her life written for her grandchildren:  “Moko was loved by all her relatives and a mother figure to me in particular.  Love glowed from her and everyone in the village knew, if they needed help or maybe cash, Moko would try her best for them.  A loving husband and son were her reward.”

St James’ Church, Badsey, played an important part in the life of the Pethard family.  Doug was firstly a member of the Sunday School, then a choir member, bell ringer and later organist.  His father and uncle were also both bell ringers.

Doug was educated at Badsey Council School and Prince Henry’s Grammar School, Evesham.  He had a distinguished athletics career at Prince Henry’s, was captain of his House, a school prefect and captain of the school soccer and cricket teams.  He went on to Birmingham University from where he graduated with an Honours degree in Geology and Geography in 1935.

Doug was a talented footballer.  He played for Badsey Rangers and assisted them when they reached the third round of the FA Amateur Cup.  At various stages in his career, he also played for Evesham Town, Cheltenham Town, Aston Villa Colts, Worcester City, Hereford United and the Universities XI.  He had declined to sign professional forms for Aston Villa on account of scholastic studies, but assisted them as an amateur on many occasions.  He played just one game only for Worcester City, but his story was featured in a Worcester City programme of October 2008.

On graduation, Doug taught for a short time at Walsall, but then moved to Cowbridge Grammar School, Wales, primarily teaching Geology.

It was the summer holidays of 1937 and Doug had returned to Badsey for the first three weeks to stay with his parents.  On Monday 16th August, he set off for Austria with a friend and fellow teaching colleague, Arthur Bower Codling, of Hawk’s Point, Carbis Bay, St Ives, Cornwall.  As a keen student of geology, Doug’s visit to Austria was partly of an educational nature as well as a holiday.  They arrived at Igls, a village in the Austrian Tyrol, around 5 km south of Innsbruck, on the morning of Thursday 19th August.

Doug’s cousin, Doreen Moore, described the trip to Austria as being “in those days quite a daring move.  Auntie Moko was quite sick with worry and, on the day he was due to arrive in Igls in the Tyrol, she became quite frantic and said something was wrong.”

Doreen went on to explain what happened next and wrote movingly about his death in her private memoirs:

You see, what happened was, he arrived at the Hotel, sat down to write what was to be his last letter home, saying, “This place is the nearest to Heaven I’ll ever see” then, with Arthur, went for a cooling swim in the lake.  He went down with cramp which Arthur was unaware of until it was too late.

The lake was the nearby Lanser See, popular with bathers.  A newspaper report said that “Mr Pethard, who was an excellent swimmer, disappeared under water, but his friend thought he was merely swimming under water.  However, when he failed to reappear on the surface he became alarmed and with the help of other bathers repeatedly dived in the hope of finding him.  No trace of Mr Pethard was found, however.”

Doug’s body was recovered the following day after an all-night search.

Joshua and Elsie Pethard were both at home when the telegram, “Regret Douglas drowned, phone instructions” came from Arthur Codling at 8 o’clock.  A telephone call was put through to Mr Codling at his hotel in Innsbruck that night.  Doug’s mother was inconsolable.  She collapsed on receiving the news and had to be attended by a doctor and nurse throughout the night.  Doreen was with her aunt and uncle when the telegram arrived and said:  “It was a terrible day for us all and worse because we could do nothing to help Moko and Uncle Jack.”

Doug was buried at Igls on Saturday 21st August, the funeral service being conducted by a Vicar from Norwich who was visiting there.  Doreen wrote in her memoirs:

His body was recovered and he was buried in the tiny churchyard in Igls, with apparently the entire village attending.  An English vicar took the service.  He later visited Badsey.  My aunt was too ill to travel and in fact never saw his grave.  She told me she would never have been able to leave him had she gone out.  I think her mind didn’t want to accept he was in a grave.  I eventually found his grave in 1970 and it was still being looked after, even though all those years had passed.  A candle is still lit on it on saints’ days.

My auntie had so many wonderful letters and tributes paid to Doug that they were eventually put into a bound book for her.  She also received countless letters from people of many nationalities and, in particular, a Dutch lady who went to Igls yearly.  When war came in 1939, we were all very anxious about the upkeep of his grave.  Before and after the war, cash was always sent for that purpose but could not be sent for those years.  When I went to Igls, I took photographs of the grave, but Moko didn’t really know much by then and died shortly afterwards.

Two days after Doug’s death, at the football matches at Badsey and Evesham on Saturday 21st August, the players stood side by side with heads bowed for a minute’s silence.  In a glowing tribute, written in The Evesham Standard, Doug was described as “a true sportsman, a great athlete, and one of the most versatile footballers it has been my good fortune to know.  Pethard gave his services on the football field, not for the publicity he knew his wizardry would command, or for what he could get out of it, but because of his great love of the game, which no one tried to play more keenly and cleanly.”

On Wednesday afternoon, 25th August, a memorial service was also held in St James’ Church, Badsey, and the hymns sung were the same used on the Sunday previous to the death of Doug, who on that occasion had assisted the choir.  There was a full choir and the church was filled to capacity with friends and representatives of sporting organisations in the district.

In his address, Canon Allsebrook said he had watched Doug’s career at school, university, on the sports field, and in his life’s calling as a school master, which had opened so auspiciously – and a career which had promised so much good was suddenly cut off by death.  “As a boy and as a man he came as near to the ideal as it is given to mortals to attain,” he said.

Charles Binyon, who had taken a great personal interest in Doug, told a local newspaper reporter that his death had plunged the whole village in gloom.  “He was exceedingly popular and much liked by everyone who knew him,” said Mr Binyon.  “He was an exceedingly good scholar, and much sympathy is felt for the parents on the death of a son who was on the threshold of a promising career.” 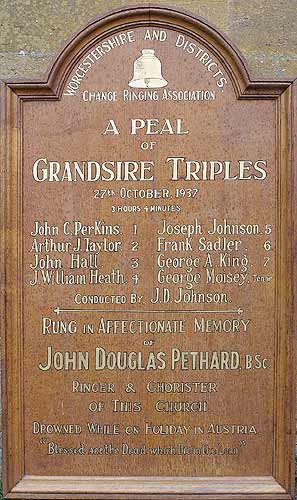 On 27th October 1937, a peal of Grandsire Triples was rung at St James’ Church in memory of one of their own, Douglas Pethard, who had died two months earlier.  It was the anniversary of his birthday; he would have been 24.

In August 1938, a Peal Board was unveiled by Charles Binyon at a special service.  The Vicar, Canon Allsebrook, said:  “We place this peal board here to record the peal rung on these bells on his birthday, October 27th 1937, as a mark of respect and affection for the memory of John Douglas Pethard, a member of the band of ringers, and for many years a devoted chorister of this church.”

A year later, choir stalls were dedicated at morning service on 5th November 1939, in memory of Doug.  The stalls were in English oak, with a carved inscription on the front rail:  “In happy memory of John Douglas Pethard, an exemplary chorister and afterwards deputy organist, who died August 17th 1937.  R.I.P.”  Many of his friends had contributed to the fund which had been started by the Parochial Church Council. 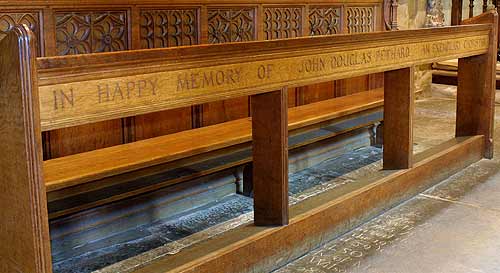 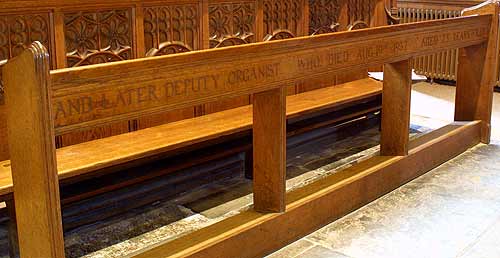 Doug’s grieving parents spent the rest of their days in Badsey, Joshua dying in 1943 and Elsie in 1970.  Doreen wrote of the effect that Doug’s death had on her aunt:

For a short time she even turned against her Church but under it all never really lost her faith and in fact they were pillars of the Church and remained so …..

Moko continued to keep his cap and gown well looked after until someone in the family could one day use it.  This was in fact the cap and gown worn by Michael [Doreen’s son] at Brighton.

It was the end of an era in Badsey history.  With the death of Elsie Pethard in October 1970, for the first time in nearly 250 years, there were no longer any Pethards in Badsey, and there was no one from the next generation to carry on the name.  Doug’s name, however, lives on in Badsey Church.