At the turn of the 20th century, one of the most prominent fruit and vegetable dealers in Badsey was William Pethard who lived at The Poplars on the High Street.

William was from an old Badsey family, his 3xgreat-grandfather, Thomas Pethard, having settled in Badsey in the 18th century.  William grew up in Badsey with his maternal grandparents, John Pethard, one of Badsey’s first market gardeners, and his wife, Ann (née Ayland).  William was the illegitimate son of John and Ann’s eldest daughter, Lucy.  Lucy was aged only 15 or 16 when she gave birth to William.  His birth was registered at Evesham as William Pethard but, when baptised at Pinvin on 2nd September 1866, a second name of George was added.  The location of William’s birth is uncertain.  The 1871 and 1891 census say Badsey, the 1881 census says Aldington and the 1901 census says Pinvin, any of which could be correct.  John and Ann Pethard had been living at Aldington in 1861 but had moved to Badsey by 1871, so it is unknown where they were in 1866.  As William was baptised at Pinvin, it is also possible he could have been born there, as Lucy may have been in service there.

In April 1870, Lucy married Charles Richardson at Whittington.  They had three children and lived firstly at Worcester and then at Toxteth Park, Liverpool.  It seems that William had no part in this family grouping and spent all his time in Badsey with his grandparents.  His mother was aged only 30 when she died at Liverpool in 1880.

William may possibly have spent a short time living at Aldington, but most of his childhood years were spent living in a new cottage in Badsey which was built close to where the school now stands (the school was not built until 1895).  This cottage and the one next-door, were demolished about a hundred years later; No 12 School Lane stands on the site.  At the time of the 1871 census, the household comprised his grandparents and their youngest daughter, Sarah Louisa, who was actually his aunt but was only five years older.

William’s grandmother, Ann, died in 1879 and his grandfather, John, remarried the following year to Ellen Wright.  William was still living with his grandfather and step-grandmother at the School Lane cottage in 1881.  He is recorded as “George W” and his occupation listed as “Market gardener’s son”.  Also staying was his great-uncle, Benjamin Pethard; his aunt, Caroline Sears, lived in the cottage next-door.  William’s grandfather died at Badsey in 1884 and his step-grandmother returned to live in her native Bristol.

By 1891, William was lodging with Charles and Kezia Watkins at what is now No 25 Old Post Office Lane.  He was described as a market gardener who employed others.  The Poor Rate book for Badsey of 1890 reveals that William occupied 1a 0r 19p of land at The Green owned by Thomas Byrd and 3 acres at Badsey Field owned by Henry Byrd.

William married Badsey-born Elizabeth Addis in the June quarter of 1895 in Birmingham.  Elizabeth was the daughter of George Addis, another of the Badsey market gardening pioneers.  They had one child, Lucy Hannah, born in 1896.  By 1901 they were living at what is now No 15 Old Post Office Lane, in the house of William’s father-in-law, George Addis.  Like his father-in-law, William was described as a “Market gardener (own account).  William and family later moved to The Poplars, High Street, which he rented from Thomas Byrd.  This was probably when he set himself up as a salesman.

1904 William began advertising in Smith’s Household Almanack as a fruit and potato salesman of Badsey and Smithfield Market, Birmingham.  This was in the days before the co-operative, Littleton & Badsey Growers, had come into existence, so the early market gardeners usually sold their produce either through the commission agents in the cities and large towns, the markets at Evesham or local produce dealers.  Having already established himself as a market gardener, he soon became known as a fair and trustworthy dealer.

In 1907 and 1908, William advertised in the Badsey Parish Magazine, now describing himself as a fruit grower, commission agent and coal merchant.  All kinds of garden produce was bought and sold on commission and was taken to Littleton & Badsey Station and thence to Smithfield Market, Birmingham.  A bag waggon served Badsey on Mondays and Fridays, Aldington and Wickhamford on Tuesdays, the Littletons on Thursdays and Bretforton on Saturdays.

To the right is an example of a token used by William Pethard at Smithfield Market.  Tokens are coin-like objects used instead of coins, either to advertise his business or in the way in which wholesale food markets used tokens:  as a receipt for deposits paid for baskets, boxes, sacks and other containers used to convey produce.  When baskets, boxes, sacks etc were issued, the trader would charge a deposit to ensure the return of the container.  Simply returning the deposit when the container was returned was open to fraud, since they could readily be stolen from the back of the market and then re-presented to collect the deposit again.  To receive repayment, both the container and the token had to be presented to the trader.

For six years William was a Manager at Badsey Council School where his daughter was a pupil.  He was well respected in the community and was generous in his support of every local enterprise. 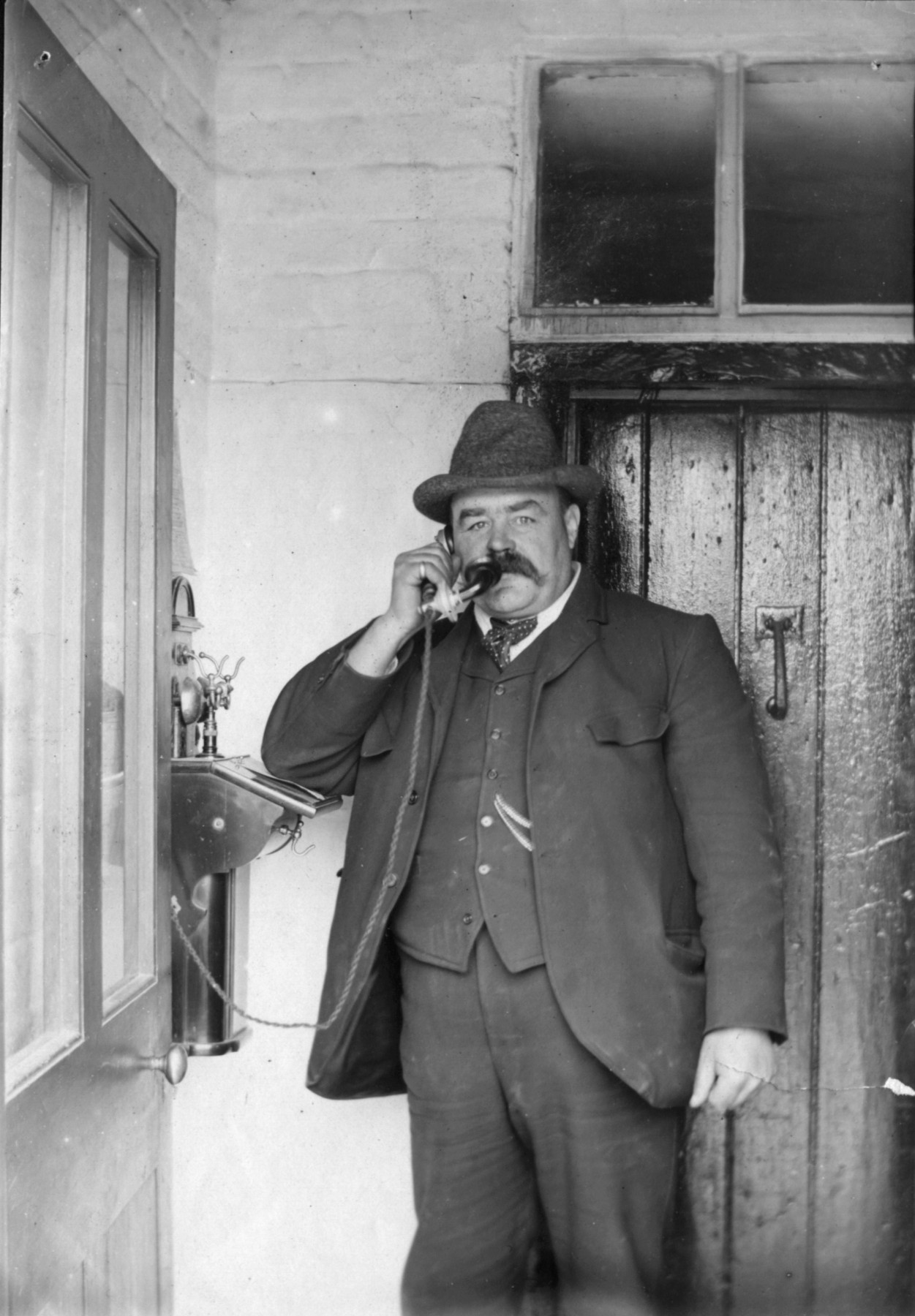 William Pethard was the first person in Badsey to have a telephone. He was given the number Badsey 2 (Badsey 1 being the Call Office at the Post Office).

William Pethard died at Badsey on 5th July 1908, aged 42, and was buried in the churchyard.  It seems that he had been ill for some time, as the obituary in the Parish Magazine said that he “had been a patient sufferer for a long time” and “passed peacefully away on Sunday morning”.

William’s grieving 12-year-old daughter died just four months later and was buried at Badsey alongside her father.  The School Log Book for 13th November 1908 states:  “Lucy Pethard, Standard VII, was buried on Tuesday.  She was in school on 3rd July.  Her father died on 5th July, since which date she gradually faded.  The children subscribed for a beautiful floral cross.”

By 1911, widowed Elizabeth was the owner-occupier of a new house on Bretforton Road (present-day No 18), which she had moved to after William’s death.  She was a market gardener and an employer.  Her mother, two nieces, a cousin and a boarder were also living there.  Elizabeth died in 1937.

Acknowledgements:  With thanks to Terry Sparrow for information on William Pethard’s business dealings.