In September 1972, Rev. Peter Braby wrote an article for the Badsey, Aldington and Wickhamford Parish Review on ‘Goods of a Wickhamford Yeoman 1601’. This concerned the inventory produced for probate purposes after the death of William Spooner at the end of 1601. According to the parish burial register, William ‘Sponer’ was buried in Wickhamford Churchyard on 30th November 1601.

Rev. Braby was sure that William Spooner must have lived at Wickhamford Manor because of the extent of the possessions listed in the probate document and other supporting evidence. This article reproduces the one written in 1972, with some additional material.

The Spooner family were tenants of Wickhamford Manor from 1529, when the first William Spooner came from Twyford to lease the Manor from Evesham Abbey for 51 years. The Crown, at the dissolution of the Abbey, confirmed this lease ten years later. In 1562, Queen Elizabeth sold the Manor to Thomas Throckmorton of Coughton Court and three years later he leased it for 61 years to Thomas, eldest son of William Spooner, who had died in 1544. (Rev. Braby stated in 1972 that a copy of this lease has been preserved.) There is a tablet in Wickhamford Church to Thomas Spooner’s wife, Jane, who died in 1584; Thomas Spooner died in 1593 and is buried at Wickhamford. See Appendix for a memorial to him in Tanworth in Arden, Warks.

In 1594 the Thockmorton family sold the Manor to Sir Samuel Sandys of Ombersley. It might have been expected that the next lessee would have been Thomas Spooner’s eldest and sole surviving son, also Thomas. He may have been for a while, but it is believed that he bought an estate near Birmingham, where he was buried in 1614. He is described in the inventory below, as one of the assessors, as ‘gent’. His late father’s brother William, a ‘yeoman’ or tenant farmer, may therefore have succeeded as lessee of Wickhamford Manor. William Spooner’s widow, Margaret, still held land in Wickhamford at her death in 1631.

The Inventory of William Spooner in 1601

The original spelling is used in the transcription, but the valuation prices have been presented in Arabic numerals rather that the roman figures of the original document. Unusual words are explained in a glossary that Rev. Braby added at the end of his article. (The Julian calendar year, in use at this time ran from March to March, so the date of 2nd January 1601, would be 1602 in the present, Gregorian, calendar.)

A trewe Inventory of al goods cattells & chattels that William Spooner of Wickwanfords in the Countie of Worct. Yeoman dyed possessed of taken & praysed the seconde daie of January in the ffower & ffortieth years of the Rayne of our Soverayne Lady Queene Elizabeth in Ano Dm. 1601 by Thomas Sponer gent Henry Smyth William Wilson John Bowker & Thomas Kinman/

Debts that the testator did owe £35

The farm stock was worth a good deal more than what was in the house, but a low valuation was put on the pigs – less than 2d each. Only one chair is mentioned in the whole house, although there were some forms, beds and cushions. William had 10s worth of books, which was unusual at that time.

The Wickhamford Parish Registers contain entries for the Spooner family from 1544 – the burial of William ‘Sponer’ - six years after the start of the Registers, until the burial of Sara Spooner in 1637. There is only one Spooner marriage recorded in the parish, that of Frances in 1590.

No further Spooner/Sponer baptismal entries are recorded after 1618.

No other Spooner marriages are recorded in the parish.

No further Spooner/Sponer/Sponear burials are recorded.  With the burial of 21-year-old Sara Spooner in 1637 the family disappears from the Wickhamford records thereafter.

In 1874, Miscellanea Genealogica et Heraldica, Volume 1, by Joseph J Howard, was published.  On pages 300 & 380-382 it provides an extract from the Visitation of Warwickshire, 1683, plus extracts from the parish registers of Wickhamford, Badsey, Offenham, Evesham and Norton-with-Lenchwick relating to the Spooner family.  (This publication contains three errors with regard to its transcription of the Wickhamford registers:- the burial of 'Johis Sponer' was in 1555, not 1554; the year 'Stephanus Sponer' was buried was 1587; the burial of William 'Spoonear' was in 1615, not 1616.)

Thanks are due to the Rev. Peter Braby for his research on this topic and to Peter Stewart for the photograph of the memorial to Jane Sponer in Wickhamford Church.

Following a visit to the Church by Edward Spooner of Canada in May 2015, he kindly supplied the following information on the Spooner family, based on his own family research.

“I visited Tanworth in Arden where there is a very fine memorial to Thomas Spooner (Sponar) who passed away in 1593 at the age of 93.

According to Anthony Spooner in "The Spooners of Middle England" this Thomas, husband of Jane, was also buried in Wickhamford and the memorial was put up in Tanworth by his son Thomas II. Thomas II had moved to Clay Hall near Tanworth, so a logical suggestion is that Thomas II wished to show the coat of arms and crest which had been relatively recently granted to Thomas I, on Nov. 29th., 1589.

I come from a line of Dorset Spooners who go back to ~1752 (but location not known) and we cannot push the trail further back, at least not yet. Both my Spooners and a large group of Spooners in the Caribbean used the same coat of arms as in Tanworth. Probably the Spooners of the Caribbean are linked to the Middle England Spooners, and I am actively researching that point at present.” 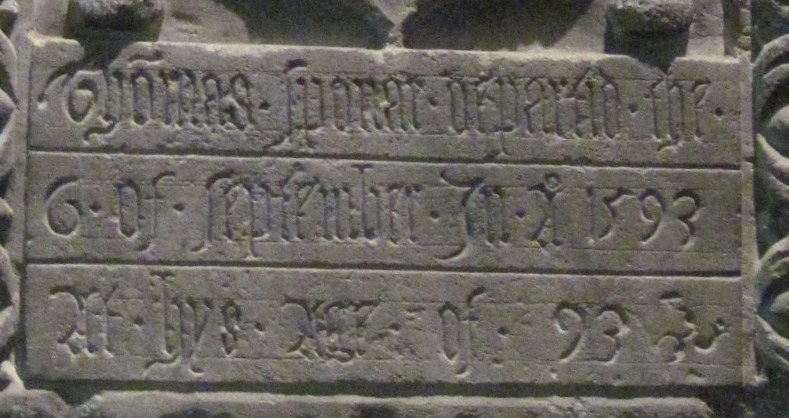