Alfred Woodall lived in Wickhamford for about 25 years and made an impact on the local community as a fruit grower, active member of Littleton & Badsey Growers and the Congregationalist Church in Broadway. He was also a J.P., but not locally.

Alfred Woodall was born in Castle Church, Stafford in mid-1875, the son of William and Caroline Woodall (nee Tanner). William was a Shrewsbury-born draper and Alfred’s siblings were his elder sisters Mabel Emma, Anne Askew and Elsie W. and younger siblings, Edith Caroline, Amy E. and William Ewart Frank. At the time of the 1891 census he was a boarder at a small private school at Cotes Hall, Eccleshall, and in the 1901 census was recorded as a ‘General Draper’ and as an employer when he was visiting a household in Hornsey, Middlesex.

Alfred married Florence Mary Peach in mid-1907, in Stafford, and at the time of the 1911 census they had a 4-month old son, Kenneth William. Their address was Rose Villa, Eccleshall Road, Tillington, Stafford and Alfred was, like his father, a draper. His father had died in 1900, so he presumably took over the family business, and he was, according to the census form, an employer. His widowed mother at this time was described as living on her own means, so the family as a whole were financially reasonably well off. An entry in Kelly’s Directory of 1912 also has him at the Tillington address but he was soon to move to Wickhamford and to take on a different way of life. Before the family left, Florence gave birth to twin sons late 1912, who were named, rather oddly, Alfred A. and Alfred G.

A move to Longdon Hill, Wickhamford

At the 1911 census, ‘Carrig’ on Longdon Hill (now ’Longdon Court’) was occupied by fruit grower, Stanley Moss-Blundell. In the 1913 Valuation Survey, Moss-Blundell owned about 11½ acres of land with his house, a nearby 2-bedroomed cottage and he also rented a further 15 acres in the village. He sold the property on 24th March 1914 to George Cadbury of Bournville for £3500, but it was already being occupied by Alfred Woodall by that time. This suggests that Moss-Blundell had already left at the time of the sale. George Cadbury (1878-1954) was married to Alfred’s younger sister, Edith Caroline (1876-1935), and their elder child was George Woodall Cadbury (1907-1995).

The house was substantial, with 5 bedrooms, three sitting rooms, bathroom and kitchen plus scullery and pantry. There was a tennis court and conservatory. The adjoining land was fully planted with plum trees (Prolific, Pershores, Victoria, Autumn Bono, Monarch and damson) and a few apples.

In 1920, the Woodalls had their last child and only daughter named Christine A. A.

Alfred and Florence Woodall are listed at the ‘Carrig’ address in the 1924 Electoral Roll for Wickhamford. He must have also taken over the land owned by Moss-Blundell, for he appears in the records of Littleton & Badsey Growers during the Great War. He was obviously a useful asset to L.B.G. and when a special Herbs Committee was appointed in about, 1914/15, Alfred Woodall was a member. He is recorded as having given prizes for the best crop of belladonna – this being a new crop for the Vale of Evesham and being grown for medicinal purposes during the Great War. It was used in plasters for rheumatic conditions and in pills as a sedative or antispasmodic. In 1919, L.B.G. set up a Committee of Reconstruction, to strengthen the Society, and Alfred Woodall was appointed as one of its seven members. In 1928, a new company, British Canners Ltd, was formed to take over the Canning Society. Two directors of the new company were appointed by L.B.G. and once again Alfred Woodall was called upon to be one of them.

It is also worth noting that Alfred’s brother-in-law, George Cadbury had an interest in L.B.G. Staff went to Bournville to look as Cadbury’s drying methods when they were starting their herb drying enterprise and George also invested money in L.B.G.

Alfred had turned his hand to fruit growing, for in early August 1926, the Western Morning News carried an advertisement he had put in the newspaper:-

He continued his interest in the canning process for, in 1933, The North Devon Journal carried an article by him entitled ‘How the Canning Industry is Helping Agriculture’. He was described as a Member of the Executive of the National Canning Council, who represented them on the Horticultural Advisory Committee of the Ministry of Agriculture.

In March 1936, he participated in a debate concerning the relationship of producers and distributors of food crops. This was broadcast on a B.B.C. Midland programme and the motion was “That the present system of distribution of meat, fruit and vegetables penalises producer and consumer.” Alfred Woodall was one of two speakers on behalf of the producers.

In March 1926 the Avoncroft College for Rural Workers was established in Offenham.  This was a residential college for men aged 18-30, to be taught rural crafts.  After nearly 10 years it had outgrown its premises and was relocated to Stoke Prior Grange in November 1935.  Alfred Woodall was Chairman of the College.

Membership of the Congregational Church, Broadway

Alfred Woodall was a member of the Congregational Union of England and attended their church in Broadway. The Cheltenham Chronicle of 2nd June 1923 reported on the annual Free Church rally, taking place at the Congregational Church, Broadway, when a public meeting in the evening was presided over by Alfred Woodall. A talk by him in October 1927 was reported in a number of local newspapers; his topic was “Social service for the young offender”. He advocated treatment rather than punishment for the young offender. “Prison never cured anyone”, he said, “but on the contrary tends to make a man or woman more criminal. The old idea of spare the rod and spoil the child, has existed far too long in our present system”. He added that apart from other waste involved, it was estimated that it cost £5 a week for every man in penal servitude.

The Western Daily Press, in October 1930, reported on a Congregationalist meeting where a speaker proposed the Prohibition of alcohol. Alfred Woodall, as Chairman, abruptly halted discussion when it was pointed out that the speaker was not a Congregationalist. Regarding the Licensing Commission, Woodall said that dealing with the licensing benches was more difficult to do that it had been 10 years previously. The tackling of clubs was one thing that needed attention. He was also concerned with the lack of hygiene when used glasses were merely dipped in a tank and then reused (“cries of ‘shame’ from the audience” !).

In an article in the Western Daily Press of 22nd July 1936 on “Life and Work in the Free Churches” mention is made that Weston-super-Mare was soon to have a colony of distinguished Congregationalists. One of these was Alfred Goodall, Chairman of the Social Services Committee, who had gone to live there on the advice of his doctor.

In 1950, in a report in the Taunton Courier on the re-opening of the Congregational Church in Taunton, Alfred Woodall is mentioned as Chairman of the Somerset Congregational Union.

Justice of the Peace

It would seem that even during his time in Wickhamford and in Weston-super-Mare, Alfred Woodall maintained his connection with Stafford. In the London Gazette of 28th December 1906, in the list of Magistrate’s appointed for the Borough of Stafford, is Alfred Woodall of Rosmeath, Rowley Park, Stafford.

In Kelly’s Directory of Staffordshire in 1932, Stafford Borough Magistrate’s list includes, “Alfred Woodall, Carrig, Longdon hill, Evesham.” In the Kelly’s Directory of Worcestershire, in the same year, he is listed in Wickhamford as resident of Carrig and also as “Woodall, Alfd. Market gardener.”

Although he seems to have moved to Weston-super-Mare in 1936, for health reasons, he is still listed in the Kelly’s Directory of Staffordshire of 1940 as a magistrate but his address was still in Wickhamford.

Alfred Woodall died in Stafford on 2nd February 1966, aged 90. A record of the memorials in Stafford Cemetery has the following entry –

William and Caroline were Alfred’s parents and Mabel and Anne were his sisters. Florence Mary Woodall had pre-deceased Alfred, dying on 13th August 1959 leaving an estate of almost £4,000. She was living at 34 Weoley Hill, Selly Oak, Birmingham at the time of her death.

Anne Askew Woodall, Alfred’s sister, became Headmistress of Milton Mount College, Crawley from 1905 to 1926. This had been founded in 1871 to educate the daughters of Congregationalist Ministers, but was later opened to the daughters of lay members of the Anglican and Free Churches. Anne died in office in 1926 and Alfred Woodall was an executor of her Will.

Photographs of members of the Woodall and Cadbury families mentioned in this article can be seen below. To date, no photograph of Alfred Woodall has been located.

The photograph below is an aerial view of ‘Carrig’ taken before the house was largely demolished and replaced with a row of terraced houses now called Longdon Court. The old road across Longdon Hill can be seen at the bottom of this picture. 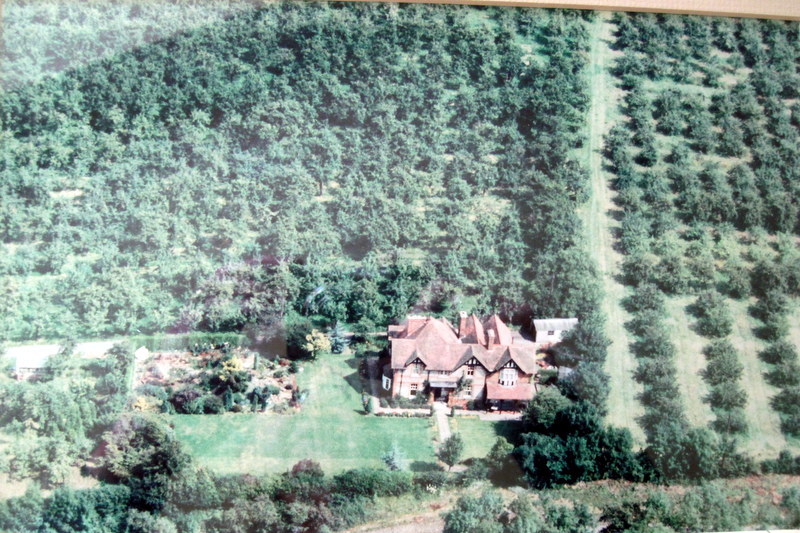