For some years in the second half of the thirteenth century there had been a dispute about who had authority over the Benedictine Priory of Great Malvern.  The Priory was technically a “cell” of Westminster Abbey, under the authority of the Abbot there.  However, it was geographically situated within the boundaries of the Diocese of Worcester and the Bishop made several attempts to exert his authority over the Priory.

Geoffrey Giffard was Bishop of Worcester from 1268 until his death in 1301.  He had resigned the position of Lord Chancellor of England to take up the position of Bishop.  In about 1282 his fight with Great Malvern Priory began.  He was not supposed to visit the Priory without being invited, but in 1282 he did so and, perhaps provocatively, preached a sermon based on the Biblical text “I will come and descend on you”.

He had ascertained that the Prior, William de Ledbury, kept 22 women in various houses and farms connected with Priory.  Bishop Giffard proceeded to depose him, on the grounds of fornication, and excommunicated all monks who did not recognise his actions, for contumacy (i.e. stubbornly opposing lawful authority).

The second most important position in the Priory was that of Cellarer, the person in charge of all provisions and he was William de Wykewane.   Wykewane was the name of the village of Wickhamford at that time.  William, according to one source, was a nephew of the Abbot of Evesham.   The monks elected William de Wykewane to be Prior of Great Malvern, but he had to travel to Westminster Abbey to have his election confirmed.  He did so with at least two attendants and the Abbot of Westminster promptly arrested William de Wykewane and his attendants and locked them in prison.  He did this on the grounds that the Bishop of Worcester had no jurisdiction over Great Malvern Priory.

King Edward I eventually ordered that the Priory be restored to William de Ledbury after letters passed between various bishops about who had jurisdiction over the Priory of Great Malvern.  The mother of the King, Queen Eleanor, wrote to the Abbot of Westminster about the imprisonment of William de Wykewane (“Prior elect”) on 26th February 1283.  Cardinal Hugh of Evesham also tried to obtain the release of his nephew and this was eventually obtained.  At one stage even the Pope became involved.

It appears that William de Ledbury was finally deposed as Prior of Great Malvern in 1287, so perhaps his misdemeanours continued.  He was replaced by Richard de Eston, who was Prior until his death in 1300. 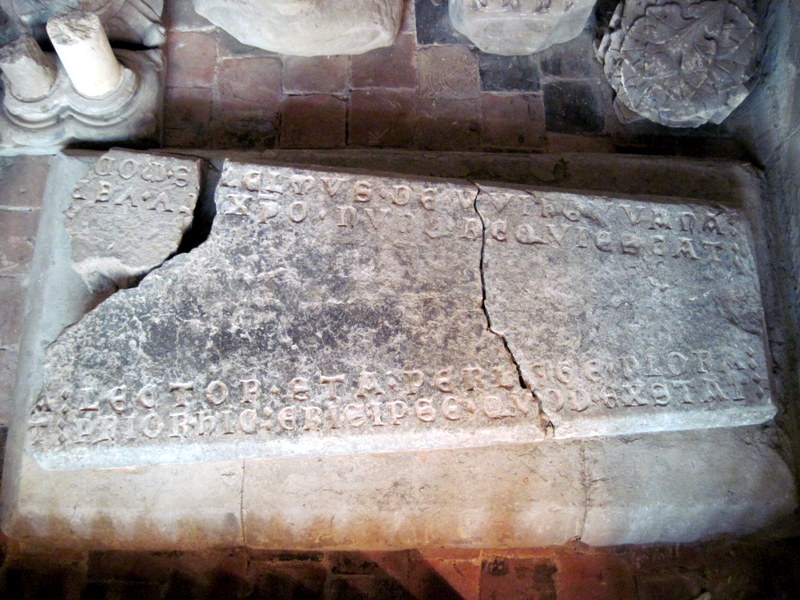 Within the Priory Church in St Anne’s Chapel is a sunken chantry chapel which contains a partially fragmented tomb lid dedicated to William de Wykewane.  (Another lid preserved in the same chantry was discovered in 1711 in rubble near the site of the old cloisters.)

The inscription is in Latin and a translation reads:

In this tomb lies William de Wikewan, May his spirit now rest in Heaven with Christ. As his body in earth; reader, stand, read through, bewail; He has returned to ashes; Prior was this man: You yourself shall be what he is.

In one list of Priors of Great Malvern, William de Wykewane is mentioned as follows – “durante lite 1272”, translating as “during litigation 1272”.

In the 13th and 14th centuries, the Church in Wickhamford would have consisted of little more than the present chancel.  On one wall, there are the remains of a painting of the Virgin and Child from this period and William de Wykewane would have often looked upon this effigy.

Many thanks are due to Anne Rich, Great Malvern Priory Church Manager, for identifying the location of the tomb lid with the inscription concerning William de Wykewane.