Suggestions for an Evesham bypass were first mooted in the late 1970s. In December 1979, an eastern route was announced. The public consultation which followed resulted in about 50 objections rather than the flood of objections which had been forecast. In The Evesham Journal of 21st February 1980, Mr G Anson of the Midland Road Construction Unit, said that the general reaction by the public had shown that the eastern route was the right choice: "We were pleased to see that we had read the mood of the town correctly."

The four-mile (6 km) £7 million Evesham Bypass was opened in July 1987 as the A435, being part of a much longer road already in existence which ran from Birmingham to Cheltenham. The road number of the Evesham Bypass, and all sections of the road from Alcester south, changed to the A46 in August 1995 when the A46 was realigned westwards when the eight-mile (13 km) £19 million dual-carriageway Norton-Lenchwick Bypass from Alcester opened. The A46, which originates in Cleethorpes and terminates in Bath, originally ran between Stratford and Cheltenham (now the B4632) at the foot of the Cotswolds. Today the A435 runs only between Birmingham and Alcester and then from Teddington Hands to Cheltenham.

Just over half a mile of the Evesham Bypass goes over land in the parish of Aldington, passing under Offenham Road and over the railway line.

The late 19th-century house, Upper Dene, which, in 2008, had a postal address of Offenham Road, is now only accessed from the bypass.  Since then the official postal address has been changed to Evesham Bypass.

The only other development on the Aldington section of the Bypass is Bypass Nurseries. 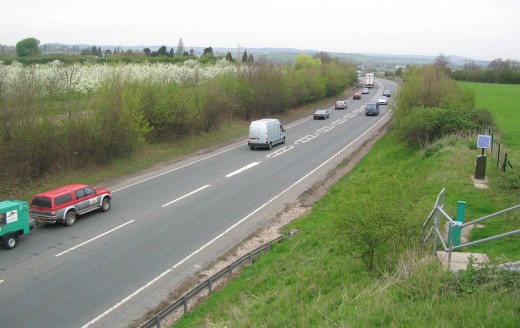 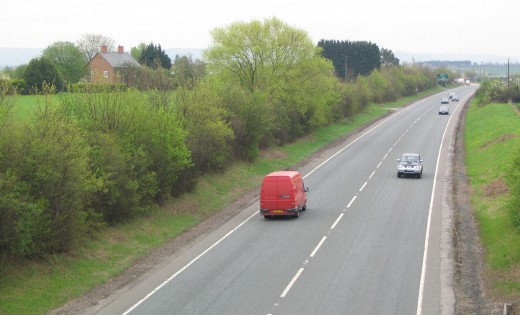