The BBC has launched a project called Voices 2005. Its aim is to document in words and sounds the various dialects that still exist around Britain. The BBC are recording the dialects for possible use by local radio, its website, and Radio Four.  On Friday 18th March, Terry Brotherton, Wendy Beasley, Michael Hewlett and Mike Edwards (all pictured right) were interviewed by the BBC audio-gatherer, John Hellings (pictured standing) at Badsey. The quartet's rendition of Asum Grammar will be heard in August. Further details of the BBC project can be found at www.bbc.co.uk/voices. 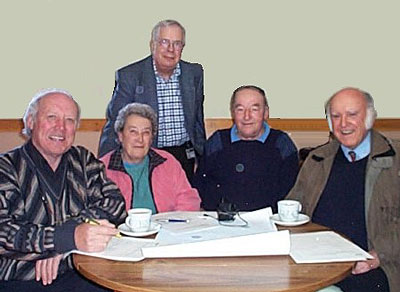 Badsey, along with the other towns and villages in the Vale of Evesham, share a common language (some would say 'very common') or dialect. It is known as Asum grammar, named after the colloquial name for Evesham. Will Dallimore, introduces (or re-introduces) you to some of its peculiarities.

Asum grammar has evolved over the hundreds of years that man has worked the fertile soil of the Vale. It was probably their insular lifestyle which helped perpetuate their dialect. There would have been no need for the early villagers to have a vast vocabulary. Most of them were born, married, and died without venturing outside the Vale during their lifetime. Their basic language would have been connected with their employment, which would have been land based, their home life, and their occasional recreation. The introduction of education into the area in the late 19th century, along with the influx of of 'outsiders' halted its progress, as there are not many instances of modern words in its vocabulary. Asum grammar, like other dialects, is an aural medium so it is sometimes difficult to express in words their exact sound. As Mike Edwards, the local poet, once told me there is no definitive way to spell words in Asum grammar, every hamlet or village has its own interpretation.

If they compiled a dictionary of Asum grammar the letter 'I' would probably follow the letter 'G', ignoring any words beginning with 'H'. There are two ways that Asum grammar approaches words that start with the letter 'H', the first is simply to drop the 'H', this is the usual practice with the names of people and places. Examples are 'Arry, 'Ector or 'Erbert. Place names fare no better, 'Ampton or 'Inton for instance. Even places that do not start with the letter 'H' can find that the 'H' is missed out of their names. A local example is Wickhamford, which is pronounced Wickam-ford  (Wickum-ford), and Snowshill becomes Snows-ill (Snos-ull). Some other 'H' words with a local connection is ovvul a derivation of hovel, used to describe a market gardeners wooden or corrugated-tin hut or shed, and oove a word used locally to mean 'to hoe'. Some of the most commonly used words that have lost their 'aitches' are when discussing a third person. A man (or mon) would be referred to as 'e (he) or 'im (him), and a woman  (or ooman) would become 'er (her). If something belonged to him it would be izz (his), if it belonged to her it would be ers (hers) and if it belonged to both of them it would be thers (their's)

The second way that Asum grammar handles 'H' words is to substitute them with an alternative. Words that start with the letters 'hea' such as head, heap and hear, are replaced by the words yud, yup, and yer respectively. It is sometimes confusing because the word hear becomes yer, and the word here also becomes yer. To further complicate matters the word your can also be replaced by the word yer. On top of all that, ears are also known as yers. There is sometimes a hint of the letter 'h' used as in h-yer-cut for haircut. Some words like horse have not only lost their 'h' but the word has been corrupted over the years so that it is known as an oss. So if you went down the blacksmith's you might see David Caswell rasping away at an osses 'oof.

Another letter which gets dropped a lot in Asum grammer is the letter 'G', but not from the start of the words but from their endings. Words which end with an ing such as ploughing and laughing are pronounced ploughin and loffin. If you were going you'd be gooin, maybe startin' from here and endin' there.

As we've seen in the words yud and yup the letters 'yu' appear regularly in Asum grammar. The word not (will not) is replaced by the word yunt. As with many local words a letter b is optionally added to the front of the word to produce b-yunt which still means not or aint. If you put a d in front it becomes d-yunt which means don't. Yunner  (or even b-yunner) are alternatives to yunt or b-yunt. As we learnt earlier about words which start with 'hea', words that contain only the 'ea' letters are sometimes replaced as in the word bean which becomes b-yun. If you were hungry then you would have summut t' yut, (something to eat). Anyone who is dead is d-yud, and death becomes d-yuth. Finally, how about d-yud-yudding your roses in the summer.

Short but not always Sweet

There is a saying which goes something like 'why use half a dozen words when you can use one', this premise is often used in Asum grammar. An example is if a local said to you, "Yerd?", which is equivalent to, "Have you heard?". You could reply, "Ast?" which means, "Have you?". Many times a phrase is compressed, an example is, "Wodder say?" or "Woddee say?" which enquires as to, "What did her\he say?'.  If you had been out you might be asked on your return, "Werst bin?" which expands to "Where have you been?".

We have seen how we refer to a man (mon) as 'e, and a woman (ooman) as 'er, but there is also a tendency to refer to the person you are directly speaking to as thee in place of you. As in the phrase, "Thee udst", meaning "You would". Although you would can also be replaced with yood, and you are with yoom. When the word you is used it is pronounced ya in a staccato way so that the letter a is hardly heard. Similarly to is pronounced ta with the emphasis on the t.

Asum grammar uses the um sound as the replacement for am or ham sounds at the end of words. So Evesham becomes Eveshum (Eve-a-shum), Offenham is Offenhum (Off-num). The ton ending to a word also uses the letter u to become tun, as in Little-tun, Bretfor-tun . The ford ending to a word is replaced by fud, as in Bid-fud, and Strat-fud. Another word ending that gets changed is in words like wheelbarrow, or marrow which become weel-baa-ra and maa-ra.

The word for will in Asum grammar is ull, whereas, will not is wunt, a corruption of won't. Would becomes ud, and udn't is wouldn't. Words that contain the word ward, as in backwards or forwards, become back-uds and farr-uds. If you cannot do something then it said that it cossn't be done, and if you were determined not to do it you would say that you "bissn't gunner do it."

Here, There and Everywhere

We have learnt earlier about how the word yer can stand for here, hear etc.. It also follows with the words there and their, the word ther or thur being used for both of them. Similarly, where and wear are pronounced wer, whereas were is never used being replaced by the word wuz (was). As in the following phrase, "Wot wuz 'er werring on 'er yud?" about a certain lady's hat.

We've had Geordie and Black Country jokes, but what about an Asum one.

Here is a poem Will wrote in Asum Grammar about an old man and a cat.

This has been just a brief encounter with Asum Grammar, and hopefully it will be expanded on in the future, with a little help from yourselves.

If you can add anything to this article on Asum Grammar then please contact me will@badsey.net

In response to the above article, Brian Jennings wrote from Harare, Zimbabwe, in 2002:

“Reading Will Dallimore's article, I have been trying to remember the Asum dialect. Here are a few phrases you can check with other natives:

Lat ee bee - Of course he is.
Lat ee yunt - Of course he's not.
How bist? - How are you? (note the German 2nd person sing)
How bist thee then? - How are you? (if you haven't met for some time)
Well, oi gutta ell! - Really! (well I'll go to hell)
Well, Oi gutta anovur! - I'll go to Hanover (how surprising!) (another German connection?)
Oi Oi then. - Cheerio.
Wur hast thee bin? - Where have you been?
Oi bin t'Asum fust then atur t' Bret. - I went first to Evesham then afterwards to Bretforton.
Hast bin t'Uffenum? - Have you been to Offenham?
I hant bin thur. Thee nows oi hant. - I haven't been there. You know I haven't.
It yun aff cold yunnit? - It's really cold isn't it?
Oi gutta ell if it yunt. - I'll go to hell if it's not.
Oi spec usullbee pullin unyuns this marning. - I expect we'll be pulling onions this morning."

“What a fantastic website, I do admire the effort that must have gone into producing such a high quality, but also very user friendly site.

I have located many of my relatives who attended Badsey school and also appeared in many of your record connections (census etc). My great-great-grandfather and many of his relatives appear in these records and I also pleased to tell you that my niece's grandchildren are currently at your school; I have notified them and several other relatives still living in Badsey and the surrounding area, of your site and highly recommend them to visit it.

Having left the area many years ago, as I have been living in Plymouth for nearly 30 years, the article on the 'asum' accent was really inspiring. I have nieces and their families still in the area, and they don't think that they have a dialect. It is not as well-known as the Brummy or Newcastle accents, but it is just as strong amongst the traditional local people.

Thank you once again for such a great website, I will continue to recommend you, and wish you the best of luck for future projects. “