James Lees Milne was born 5th September 1908, the eldest son and second child of George and Helen Lees- Milne who came to live at Wickhamford Manor in 1906. George had probably inherited wealth and the Lees Milne family had a business connected with the cotton industry and were definitely upper middle class. James was schooled at Eton.

James and Fred’s paths would probably never have crossed, although they lived in the same village, had it not been for a visit from a member of the Manor staff, Ellison, a few days after Fred left school in 1924. He asked him if he would like to take a job at the Manor as boot-boy for 12 shillings per week. Fred accepted the job.

I am sure that Fred’s first impression of life at The Manor was that James and his brother Richard and sister Audrey had been born with a ‘silver spoon in their mouth’ and lived a very privileged life compared to his own.

In the 21st June 1990 edition of the Daily Mail a concluding article written by Graham Turner appeared about the dramatic changes in Britain’s class system under the heading ‘Bred for pleasure, treasure and leisure.’ James Lees-Milne was one of the persons interviewed and is quoted several times throughout the article. His first quote stated ‘ We weren’t at all grand but we had a butler, a parlour maid, a head housemaid, two under-maids , a boot-boy, a chauffeur, a groom, two nurses for us children – and then a gardener and three under-gardeners.’

Fred saw the article and decided to put pen to paper and write to James Lees-Milne. The date the letter was written is unknown but went as follows:-

Dear Sir
I had given to me the Daily Mail by a relative who said ‘there is an article in there that may be of interest to you’. The article was about your family and Wickhamford Manor and staff. I am sure I must have been the bootboy you mentioned as I started work for your father in May 1924 until I left in 1927.
A few days after leaving school Ellison came up and asked me if I would like the job which I accepted. The wage was 12 shillings a week (60p). There was no head gardener at the time but shortly after came Mr Ross who met such a tragic end. Then came Mr Hudson and he was still there when I left.
Some of the staff you mentioned were Haines the chauffeur, Paddy O’Brien the groom, Caplin the butler, Maggie the cook and the housemaid Ester.
I always remember you when at home going down under the mulberry tree with piles of books studying whilst your brother was racing about on his BSA motorbike.
As you say it was a round of pleasure for the few. I can remember the house parties at Cheltenham races and seeing the family go off in the Minerva to Eton on the 4th June. A date I have never forgotten.
Your father went racing a lot at the time and all the staff studied the card and results. He had an open hurdler in Ormada, also Truthful Game, East Africa and Rouben.
I left and went market gardening on my own account. Times were very hard during the 1930’s but during and after the war things improved for the working class and I was able to save enough to build a bungalow on Pitchers Hill near the house where the Misses Empey lived and where I still live since retiring.
I was 80 in May and have a daughter and two granddaughters both of them medical students.
The eldest, now 22, gained a place at Brasenose College, Oxford and came down last year with a 1st Class degree and is doing her final year at Addenbrokes, Cambridge. The youngest is a student at Nottingham University Medical School, proving I think that if you have the brains and the drive the opportunities are there for the working classes, a much fairer society.
Every three years the gardens at The Manor are open and I always take the opportunity to go and walk around and it brings back many memories.
I hope you will find these few lines of interest as I did your article in the Daily Mail.’

Dear Mr Mason
I am delighted to receive your letter and thank you very much for it.
What a good memory you have actually remembering the dates when you began work at the manor and when you left.
All the names you mention came back to me after these many years of forgetfulness of some, though never of dear Maggie to whom we children were devoted.
Of the L-M family I am at nearly 82 the survivor.
Times have indeed changed since the 1920’s, and thank goodness, for the better for very many.
Just imagine any boy accepting 12 shillings a week or what corresponds in modern currency !
It is splendid to hear how well your grandchildren are doing. It gives one confidence in the young generation. I would so much like to hear about them and your good self.
Very occasionally I visit the Church at Wickhamford. My next visit will be on September 5th Wednesday. Would you and your wife be willing to have a cup of tea with my wife and myself at say Broadway, if we fetched you about 3.30 ? It would give me immense pleasure.
Yours sincerely
James Lees-Milne

Maggie Careless married Bert Ockwell and they ran the Sandys Arms from 1932 to 1948. Maggie was adored by the Lees-Milne children.

Fred never enjoyed being asked by Paddy to help in the stables. It made him fearful of the rear legs of a horse for the rest of his life.

Thank you for your letter of the 17th. I am very surprised to hear your brother had died. I believe he went to Cyprus and had never heard of his death around the village.
We shall be pleased to see you on Sept. 5th as I am sure we can recall many other happenings at the manor.
Yours sincerely
Fred Mason

Fred, and his wife Muriel decided they would not go out to tea with the Mr & Mrs Lees-Milne but would entertain them at their house. After their meeing a letter from James Lees-Milne dated 7th September was duly received.

Dear Mr Mason
A line to thank you both very much for receiving my wife and me so kindly and for entertaining us instead of our entertaining you which is what we intended.
Please thank Mrs Mason for her delicious tea, and all the trouble she took to make the visit so agreeable.
I greatly enjoyed our talk about old times. I had thought there was nobody left who would remember them, and your vivid memories revived some forgotten friends and incidents.
In case it may amuse you I enclose copy of an interview of me taken a month ago.
I don’t expect you remember Goddard who was with us when I was quite small and then worked for my grandmother.
With very best wishes
Yours Sincerely
James Lees-Milne

Surprisingly, the visit to Fred gets a mention in James Lees-Milne’s diaries. 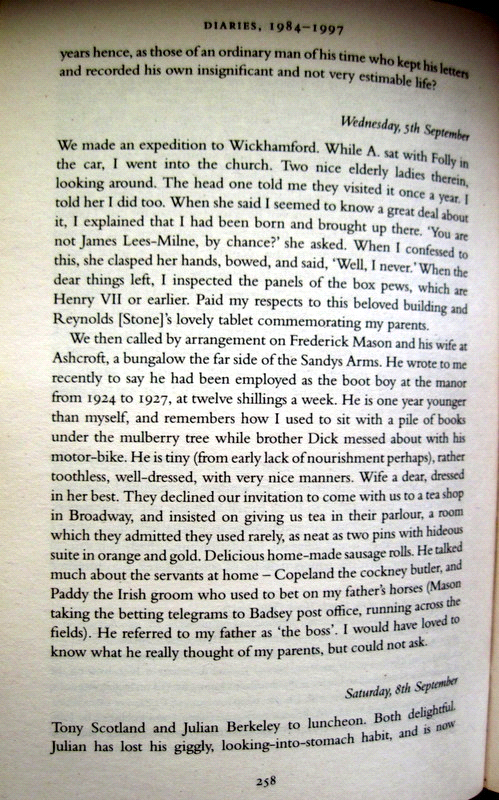 Having read some of James Lees-Milne’s diaries and the outspoken comments he makes about people he has come into contact with it’s amazing that James wasn’t confident enough to ask my father what he thought of his parents. I am sure Fred’s answer would have been positive.

With thanks to Tom Locke for the photographs.

Appendix – The hand-written letters from James Lees-Milne to Fred Mason are reproduced below. 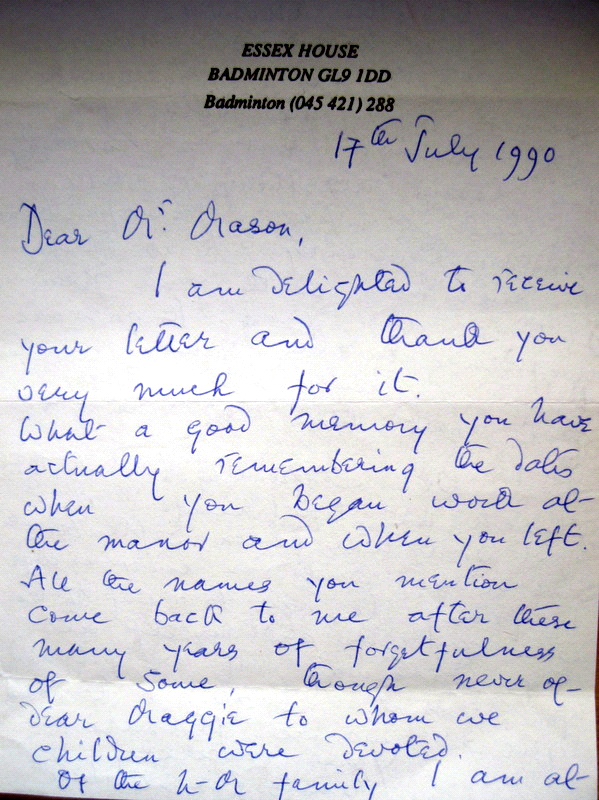 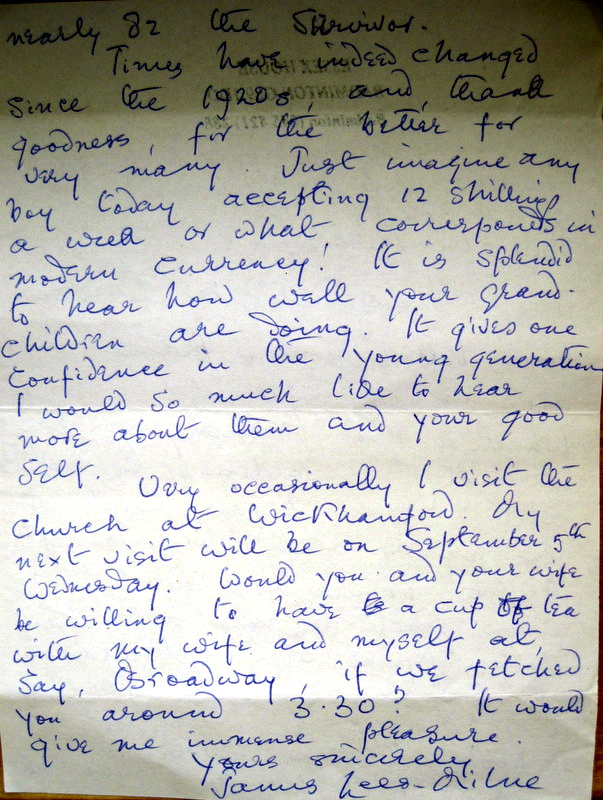 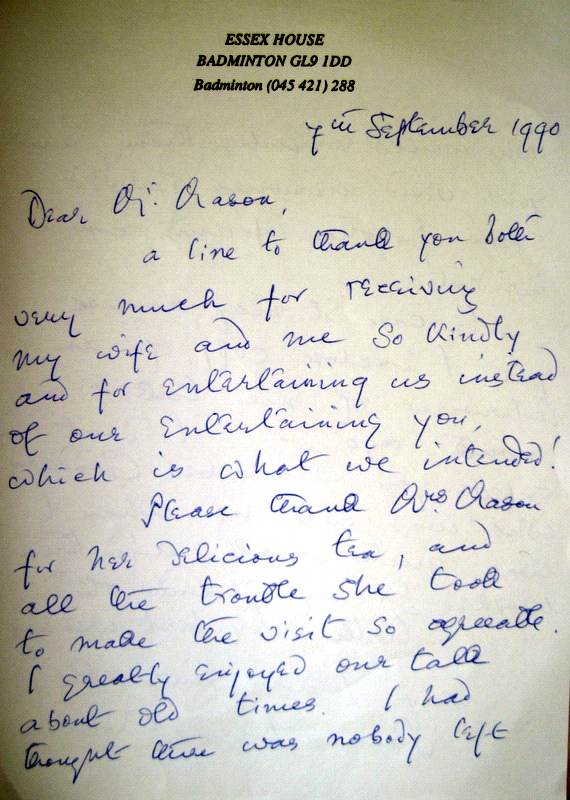 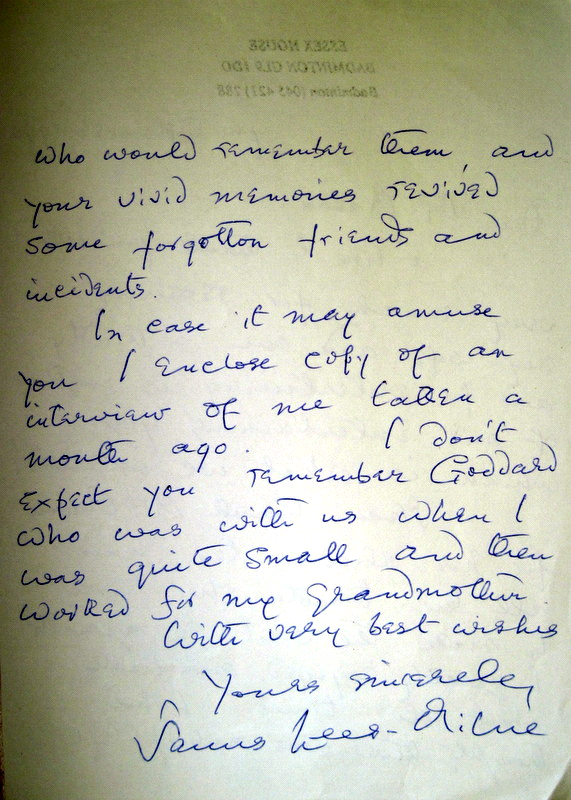