Towards the end of the nineteenth century, a group of cottages, opposite the ‘Sandys Arms’ Inn, were gradually demolished as they were in a poor state of repair.  They were situated in a field to the south of Pitchers Hill Farm’s buildings – now called Wickham Farm.  The map below was part of the document used for the July 1869 Sale of the Wickhamford Estate.   Although the sale at auction by Lord Sandys did not succeed, he sold the Estate to John Pickup Lord soon afterwards.  Lord built a number of new cottages in the village, including the present numbers 5 & 6 Longdon Hill, on the corner of Manor Road and Longdon Hill.

The numbers on the map are those of the lots at the 1869 auction.  Numbers 39 (‘Slinget’) and 40 (‘Sally Close’) belonged to The Elms Farm and 53 is the plot of the Sandys Arms.  On the other side of Manor Road, 57 is ‘Grey Gables, 62 is Pitchers Hill Farm, 63 is ‘Part of Homestall’ and 64 (divided by a broken line) is ‘Part of Homestall’ and ‘Poplow Free Ground’.  Badsey Brook runs behind these fields.  This land belonged to Pitchers Hill Farm.

The cottages that were eventually demolished are numbers 54, 55 and 56 on the plan.

The nearest census returns to the time of the sale was taken a little under two years later.  The occupiers of the cottages, and their families, were as follows: -

There was also one unoccupied cottage recorded by the census enumerator.

Demolition of the cottages

It would appear that J.P. Lord wasted little time before starting to demolish the cottages in ‘Homestall’.   The unoccupied cottage at the 1871 census was probably the one where Job Taylor was the tenant in 1869.  It was the nearest to place where Lord built the new houses in 1872 that are today 5 & 6 Longdon Hill.  In 1871, Taylor was living with his son-in-law, David Howes and his family in one of the cottages where ‘Whytebury’ and ‘Oakenshore’ now stand, at the other end of Manor Road.

On Monday 11th March 1872, a fire broke out in one of the thatched cottages and quickly spread to two others.  All were destroyed before the fire could be put out.  These were probably the row of three in Plot 56, above.  The incident was reported in the Worcester Journal of the following Saturday.

By 1881, only four of the cottages were occupied.  William Clinton and William Glover were still living there, along with agricultural labourers, William Crane and Richard Winnett, in two other cottages.  In 1891 there were only three cottages noted by the enumerator, one of which was unoccupied.  These would have been the three marked as Plot 56 in 1869.   The remaining tenants were Richard Winnett and farm labourer, Henry Simms (39), who had been born in Donnington, Worcs.  He was living there with his wife, seven children and one grandson.

By 1901, Richard Winnett was still living in the one remaining occupied cottage. He was now working as a market gardener ‘in his own right’, and his wife and daughter lived with him. He died in May 1913, aged 76, in the Evesham Union Infirmary and was buried in the churchyard in Wickhamford.   In 1911, he had been living with his son in Bewdley Street, Evesham, so the last remaining cottage had been demolished in the early years of the 20th century.

It can be seen that the cottage tenants were all agricultural workers of some description and they probably worked on one of the four farms in Wickhamford.  There are no photographs of the cottages that have been located to date.  The only image (see below) that might give a clue as to their appearance is one of the cottages that were demolished in the early 20th century and were replaced by ‘Oakenshore’ and ‘Whytebury’ in Manor Road, in 1906. 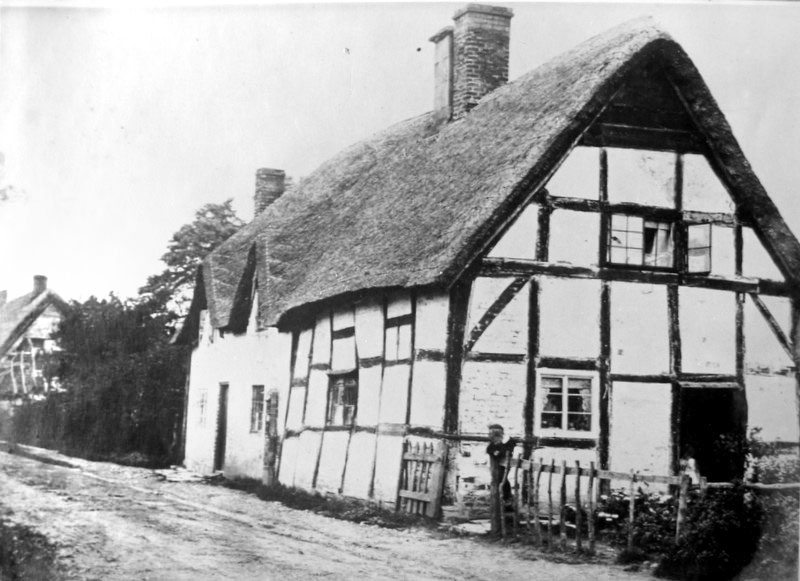 In 1861, 20% of the 124 villagers lived in the cottages near Sandys Arms, but no traces of these buildings now remain.  They were most probably of timber construction with no solid foundations.  Aerial photographs of the area that they were in show no evidence remains of this once significant part of the village.