This article brings together many photographs of Wickhamford and its residents in the Edwardian era. Edward VII reigned from 1901 until 1910, but many people think of the era as that between the death of Queen Victoria and the outbreak of the Great War. The pictures included here roughly span the period from the mid 1890s until the middle of the War. The people mentioned are recorded in the 1901 and 1911 censuses and information on the houses comes from the Government Valuation Survey, which took place between 1910 and 1915.

The Victoria County History of Worcestershire, published in 1901, records that the Manor was for many years in the ownership of the Sandys family but that it was purchased by J. P. Lord in about 1860. By 1901 the trustees of his estate still owned the Manor and it was rented out to John Idiens, a local coal merchant.

John Idiens and his wife, Alice, were in their mid 40s and they occupied the Manor from some time in the 1890s until the early 1900s. They lived there with their four sons and a daughter, one son, 20 year old Harold, being a farm bailiff. The family emigrated to British Columbia, Canada, after moving out of the Manor.

George Lees-Milne bought the Manor in 1906. Over the following decades he was to alter the appearance of the Manor and the village with new buildings in the 1930s in the Arts & Crafts style. He and his wife, Helen, lived in the Manor with their three children, Audrey, James and Richard. In 1911, they had four live-in domestic servants. The field bounded by Golden Lane and Willersey Road had fruit trees and blackcurrants and a line for a light tram for moving the produce from the field.

Next to the Manor is the Church dedicated to St John the Baptist. Before the Great War there was no boundary wall to the West end of the churchyard or between that and the Manor front garden. Instead, there was an iron railing fence.

To the West of the Manor, across Badsey Brook, Wickhamford Lane heads towards Evesham and a pair of houses stand near the stream. In 1911, the Hardiman family, George Higgins and Emily Jane and their 10-year-old daughter, Doris May, occupied one of these. George was labourer at a fruit farm, possibly the one opposite the Manor. His sister, Elsie, worked at the Manor.

The road linking the Manor to the main Evesham to Broadway road was known only as the village street in the 1911 census. In what is now the front garden of Hody’s Place stood a terrace of four brick and tile, 3 bedroomed cottages. George Lees-Milne demolished these in the 1930s to make room for the present house. In 1911, the families of Frederick Norman, Theodore Moisey, George Brotherton and George Eden occupied them. All four men were working as market gardeners.

On the opposite side of the road stood a cottage on the bend of road towards Badsey. In 1911, this was described as Manor Fruit Farm and maps of the period show orchards behind the house and where the cemetery is now. The house in now called Corner Cottage. The pair of houses now called Whytebury and Oakenfield were built in 1906, but before that there was a pair of thatched cottages on the site.

On the West side of the village street, further on towards the Sandys Arms were the three thatched cottages, that still remain – now called Robin Cottage, Old Vicarage and Weathervane Cottage.

The present ‘Robin Cottage’ was restyled in the 1930s by George Lees-Milne, but until then was a brick and half-timbered building with a tiled roof. It was rented by Charles Halford in 1913 and later by George and Mary Robbins. George was a farm labourer and he and Mary had five children. – Joseph, George, Mary (‘Polly’), Lizzie and Kate. The latter two were to be married together at Wickhamford Church in 1931 in the first double wedding celebrated there. After the Robbins family moved out it was thatched and its appearance considerably altered; it was then named ‘Robin Cottage’.

Opposite the Vicarage, The Elms, now Elm Farm, was occupied by the Mason family in 1911. John Mason was another market gardener, but his wife, Elizabeth was Head Teacher at the Council School in Badsey. There were two of the Masons’ sons living at home at the time and the elder was 19 year old George Mason. He was to join the Army in the Great War and to die in France in 1917.

In 1906 and 1907, Hubert Richards erected glasshouses on the East side of the village street. There were 3 blocks of glass totalling 37,230 sq ft and heated by hot water pipes from 3 boilers; there were an open pit-well 16 ft deep, a wind pump and a galvanised iron tank on brick pillar. The nursery was sold to Henry Pearce during the War.

At the present 12 Manor Road in 1911 lived Stephen and Annie Styles, who were married the less than 2years before. Their baby son, also Stephen was to perish in World War 2.

The Walters family, Elias and Dinah, lived at what is now 8 Manor Road, with two of their sons, John and Robert. Both parents were in their sixties by 1911, but Elias, commonly known as Charles, was still working in market gardening.

At the present 6 Manor Road, lived Basil and Emma Griffin with their two sons, Frederick and Sidney. Basil ran his own market garden and, although he would be then in his mid thirties, like many men in the village, he enlisted in the Army.

Back across and further along on the West side of the street was a pair of thatched houses then called Elm Cottages, but now joined and called Grey Gables. In these, in 1911, were two generations of the Heritage family. Hannah Heritage, aged 70 and widowed, lived in one with her unmarried son, Arthur and two grandchildren. In the other was her married son, Robert and his wife Mary and daughter Maggie. Both of Hannah’s sons were market gardeners.

Next to Elm Cottages, in 1911, was Pitchers Hill Farm, run by William Smith. He and his wife, Elizabeth had seven children at that time. The farm is now called Wickham Farm and the adjacent Wickham House is under separate ownership to the farm.

Back on the East side of the road on the corner of the main highway was, and is, The Sandys Arms. In 1911 it was kept by George Pethard and his second wife, Hannah, and it had been in that family for many decades and also included a wheelwright’s business. George was to die later that year. The pub had two stables and an old brewhouse recorded in the 1912 Valuation Survey.

On the South side of Pitchers Hill, alongside Badsey Brook, the Smith family had operated Wickhamford Mill since at least 1841. In 1911, Wingfield John Smith was the corn miller and he ran the business with his wife, Jane. Both were elderly by this time, but their only son, Albert Wingfield, had been born both deaf and lame due to a spinal condition and was of little help in running the mill. Tragedy was to befall the family in the last days of 1916, when father and son died on the same day of unrelated illnesses.

On the South side of the highway going towards Broadway, at what is now Windy Ridge (20 Pitchers Hill) George Pethard’s son by his first marriage, Edward, was living with his family in 1911. He was a carpenter and he and his wife, Annie, had three young daughters, Violet Lillian, Priscilla Marjorie and Nancy Kethleen.

Charles Mason, like most men in the village in Edwardian times, would have helped bring in the harvest on the local farms.

Next door to the Masons in the others half of the semi-detached houses lived William and Emma Moore, together with her parents, Charles and Comfort Colley. William market gardened on his own account, whilst his father-in-law, Charles, was a market gardener’s labourer, at the age of 66 in 1911.

At the present 44 Pitchers Hill, in 1911, lived the very large Halford family, Samuel and Rebecca with seven children and two grandchildren. Rebecca and most of her children were born in Offenham, but they now lived in Wickhamford where Samuel worked as a market gardener’s labourer.

Towards the parish boundary, in the present 93 Pitchers Hill, the Cox family lived in 1911. William and Alice, in their mid-40s, had seven of their eleven children still at home. All of their children survived infancy. William ran a market garden on his own account and in that year his two elder sons still at home, John Henry and Albert, worked with him.

Six of the Cox boys were to serve in the Great War. Albert, George, John, Charles and James survived, but Frank, who enlisted under age, died of heatstroke in Salonika, Geeece in July 1916, just short of his 18th birthday.

On the North-Eastern boundary of the village lay Whitfurrows Farm. In 1911, this was in the hands of the Warman family. Herbert and Rose had seven children at that time and had been married for 13 years. Although living in the farm house, Herbert was only a labourer on the farm. Despite being around 45 years old, he enlisted in November 1914 and served throughout the War. A number of the Wickhamford market gardeners had allotments at Whitfurrows. Stanley Moss-Blundell of Longdon Hill, at the other end of the village, grew 15 rows of raspberries here in 1913.

Moving towards Evesham from the Sandys Arms there were a number of semi-detached cottages. The occupants in 1911, the Pitman, Jones, Freeman, James, Hallam and Andrew families were all occupied in farm work or market gardening.

At Field Farm, Benjamin Carter and his wife, Emily, had a large farmhouse with 15 rooms but all of their seven children had by then left home. For extra income they took in farming students as boarders. Further towards Evesham were the present Oxley House, where Benjamin Swift was a fruit grower; Orchard Farm, with Wilson Allchurch as a foreman market gardener and Longdon Court, where Stanley Moss Blundell was another fruit grower. To date there are no available period pictures of these properties and only a few photographs of the occupants, but not from the Edwardian period. 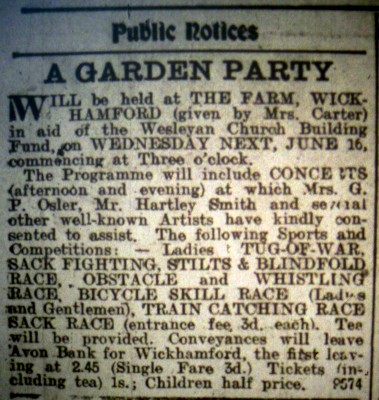 Apart from the occasional fete (above), sport was also a part of village life and there was a football team called Wickhamford Albion before the Great War. It is not known where they played their home games.

All of the photographs used in this article are from other Wickhamford sections on the Badsey web-site, where credits for their use are given. Thanks are duly given to all of those who have shown interest in this work and supplied material.