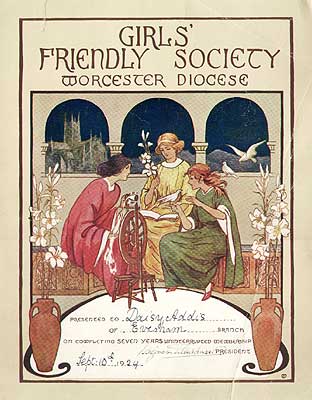 This beautiful certificate (right) was loaned by Pete Addis of Badsey, the nephew of Daisy Addis. Daisy May Addis (1900-1987) was the daughter of Charles and Eliza Addis. She was born and brought up in a cottage in The Alley, and she and her sister continued to live there for most of their lives until the cottages were knocked down.

A Badsey branch of the Girls’ Friendly Society was founded in the early part of the 20th century by Miss Ethel Narcisse Sladden. The meetings were held at her home, Seward House. The Girls’ Friendly Society was a national organisation which had been founded in London in 1875 by an Irish woman, Mrs Elizabeth Townsend. It was a society of friendship and recreation in which all girls might share, bound together in a fellowship of Christian Love and service. The organisation’s purpose was (and is, because the organisation still exists to this day in certain parts of the country) "to unite, for the glory of God in one fellowship of Prayer and service, all girls and women throughout the world, to promote friendship and uphold purity in thought, work and deed."

It appears that girls usually joined the Girls’ Friendly Society in their mid-teens, soon after leaving school, but as these certificates indicate, they obviously stayed in the organisation long past girlhood! Daisy would have been aged 24 and 31 when she was awarded these certificates for faithful membership.

Gertie Cowley (née Bennett), who was six years younger than Daisy, had this to say about the society in a tape recording made when she was in her nineties: "Miss Ethel did a Girls’ Friendly Society. We used to love it. She always got one good book that we loved. She used to sit and read. We had one little room in that big house, Seward House, where the Sladdens lived. We could always smell the cooking. We used to go in there and sit there and she used to read the stories to us, and we loved it." 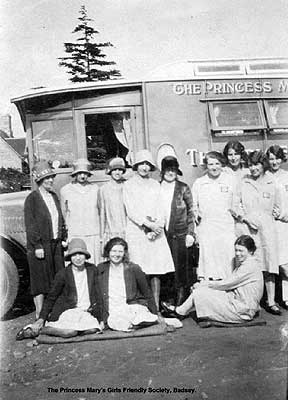 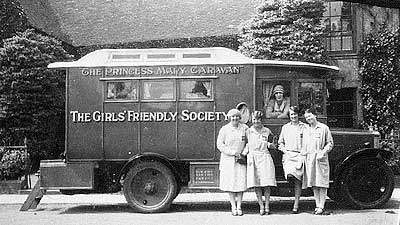