Badsey's first post office opened in 1891. It was in Blenheim Cottage at the end of Old Lane, which today we call Old Post Office Lane. Evesham had a post office as early as 1685. Many village branches opened in the nineteenth century including Honeybourne in 1878 and Bretforton in 1884. The 1890s were a prosperous time for Badsey with the beginning of the market gardening boom and many new houses going up in the village.

Before the post office opened there were, of course, letter collections and deliveries in Badsey. Littlebury's Directory for 1873 tells us that in Badsey "Letters are received through Evesham and are dispatched thereto at 4.50 pm". The 1883 Ordnance Survey map showed two letter boxes in the village. Deliveries appear to have been the responsibility of the eccentric parish clerk William Barnard and his daughter Elizabeth. A letter to William from the Evesham postmaster dated 1890 reads:
"I am getting complaints of the late delivery of the letters delivered by your daughter, said to be caused by her stopping to gossip so much. This is a serious charge and if correct, it must be discontinued forthwith. Letters must be delivered at the earliest possible minute and I trust this will be sufficient to ensure the same in future."

The first Badsey postmaster was Elijah Crisp. He and his family were to go on and run the village post offices for 60 years. Elijah was baptised at Badsey in 1865, son of Henry and Ann. His father Henry was a stone mason and Elijah also gave this as his occupation at his marriage in 1892. His wife was Rose Emily Jones from Evesham. She played as large a part in running the post office as Elijah.

This is how their granddaughter Pat Goldstraw describes the couple -
"Rose Emily Crisp … Petite, blue eyed, very stylish, dressy, independent character … Elijah still adoring her in his seventies was always a kind loving and gentle intelligent man. He had been well educated, partly privately. He had none of the temper associated with red hair. She was more volatile."

Curiously, at the same time the Badsey post office opened, the Evesham branch was being run by George Ernest Crisp and his wife Sarah Ellen. But these two Crisp families appear to be unrelated.

When it first opened, the Badsey Post office was just for sending and receiving mail. In August 1891 the Reverend Gepp wrote to the Post Master General and received a reply in October informing him that the Badsey office would soon be equipped for sending and receiving telegrams. An appeal from the vicar may well have got things moving. The telegraph office opened in December 1892. The office was given the code signal BSW and its hours of opening were from 8am to 8pm on weekdays and from 8am to 10am on Sundays. A money-order and savings bank office opened there the following year in July 1893. Kelly's Directory for 1896 showed more services including "express delivery, annuity & insurance office".

It must have been a busy time at Blenheim Cottage. Rose gave birth to three children between 1893 and 1896. On all three baptisms Elijah is shown as 'postmaster' but his skills as a stonemason were soon to be called on again. Blenheim Cottage was some distance from the centre of the village and not ideally positioned for a post office. So in 1897 the Crisp family built a new house on the High Street directly opposite the church. 28 High Street became the address of the post office for the next hundred years. 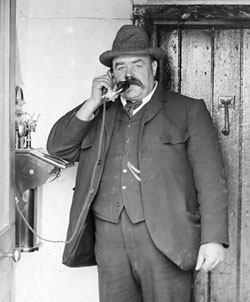 At this time, telephones were also the responsibility of the post office. By 1903 Badsey had a public call box and a few wealthy individuals had private phones. The 1903 phone book had eight Badsey entries and by 1910 this had increased to 18; the Badsey telephone area included Wickhamford, Offenham, and Bretforton.

Pat Goldstraw recalls:
"The post office also included a 24 hour a day manual telephone exchange which I remember well and which only became defunct after World War II. As my aunts grew older and helped, I remember so well how naughty they were and plugged in the connections and listened in to the scandals of the local high society - chiefly the Lees-Milnes of Wickhamford Manor…."

Pat reminds us that the telephone exchange had to operate every day of the year:
"The Christmas lunches stand out in my mind …The Christmas gathering consisted of twenty or more. The living room and 'switch room' were both laid up for everyone - often sitting on planks balanced between chairs … One aunt always sat on the revolving chair by the telephone exchange 'putting through' people exchanging Christmas greetings."

The shop on the High Street was a post office and sold little else. Pat remembers "parcels sealed with sealing wax, pensions, postal orders, savings banks etc - the sole extras were Blue Bird Toffees and Basildon Bond notepaper". In the 1920s a series of six picture postcards of Badsey were specially produced to sell in the shop.

Elijah Crisp died in 1939 but Rose continued as postmistress supported by her grown up children. Her daughter Rose had the very responsible job of balancing the books for the year, always done on New Years Eve and this very often gave her problems and kept her up late into the night.

Pat sometimes was asked to deliver telegrams after school, a job she did not particularly like. Market gardeners without telephones sometimes had market prices sent to them by telegram. During the war, some telegrams brought bad news.

Rose Crisp died on VE day, May 8 1945. The Crisps were determined that the post office should continue to be run by the family.

An opportunity arose when Rose's son Stephen Crisp was demobbed from the army and returned to Badsey with his wife Florrie, who came from Coventry. He bought the post office from his brothers and sisters. The plan was for Florrie to run the post office while Stephen found work elsewhere. Florrie had daughters Susan and Elizabeth born in 1946 and 1948. One of Susan's earliest memories was of of sitting on the back of her mother’s bike when she went out to deliver telegrams. Unfortunately Stephen could not find work locally and ended up living in Coventry, only returning to Badsey at the weekends. Reluctantly, the family decided to give up the post office and move to Coventry. Stephen offered the post office back to the family but no one wanted to buy it. He needed the money for their home in Coventry and so sold it to Mr Thacker in 1951.

After more than sixty years the Crisps' connection with the Badsey post office came to an end. But it did continue elsewhere: one of Elijah's sons Henry became postmaster at Stratford on Avon.

The post office continued to operate from 28 High Street with a succession of owners. After Mr Thacker, it was taken over by Connie and Henry Marshall. Connie had previously run the Wheatsheaf pub. In the 1960s it became 'Stores and post office' run by J R & A Izod. The left hand bay window of the house was replaced by a much wider shop window stacked full of provisions for sale.

From about 1981 the post office was run by Derek and Sheila Woodbridge. They were followed by Jean Caston who was postmistress from about 1987 to 1992. A robbery occurred during this time.

In the 1990s, the post office usually closed for about an hour at lunchtime. On one such occasion, a violent robbery took place and the postmaster, Tony Diston was injured. It soon became clear that he did not want to continue with the job. People began to think about a new location for the village post office. One suggestion was to locate it inside the Wheatsheaf pub.

In 1997 George Singh Sangha and his brother Amrik got together andbought the village shop in Badsey that had previously been run by Lucy Meadows. About a year later, they enlarged it to include a post office. The Spar Shop at 16 High Street not only gave the post office a new home but also a new lease of life. George's warmth and enthusiasm charmed his customers and brought out the best in his staff. The post office run by Becky, Wendy and George himself must be one of the friendliest sub post offices in the country. 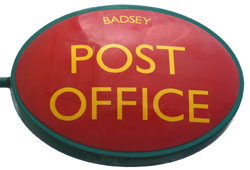 In January 2001 the Post Office Network suddenly closed this new Badsey post office and asked people to use the Evesham post office instead. They invited suggestions for alternative locations for a post office in Badsey. For a few weeks, things looked very grim and the Sangha brothers £40,000 investment in converting the shop was at peril. But after negotiations, protests, and a petition signed by more than 500 people, the authorities relented and the post office opened again.

Today in 2007 the government wants to close a large number of small post offices. In an effort to support Badsey, people have written to government representatives and to a Department of Trade and Industry consultation. George welcomes more support of this kind but comments that the final decision may depend simply on the amount of business flowing through the Badsey post office. Perhaps the best campaign slogan is 'Use it or lose it'.

With grateful thanks to everyone who has provided information including Susan Evans, Pat Goldstraw, John Mansell, Terry Sparrow, Maureen Spinks and The British Postal Museum and Archive. The letter to William Barnard is taken from an article by Don Barnard.