Postcards sent to Badsey in the early 20th century

The following two postcards were both written to Badsey residents nearly a hundred years ago. They came into my possession via The Postcard Index, http://www.practicalresearchindexes.co.uk.

Writing postcards to friends and family was a very common pastime in Edwardian times. Colin Buck, who set up The Postcard Index, says:

In an age before the widespread use of the telephone, the picture postcard was a quick and cheap method of communication. In the early years of the century some three million cards a day were going through the mailing system. There were no class barriers, from the pauper to the prince, people were busily writing and receiving postcards. The biggest hobby of the day was postcard collecting. Virtually every household had someone with an album collecting cards sent by friends and relatives from all over the United Kingdom and abroad. Many were sent just to add to the collection and contained little by way of a message. Many others however were sent with the purpose of giving information about family matters or impending visits, about illness, death, births. Many were messages of love and show the heartache of separation especially during the Great War when they were used as a vital line of communication between the men at the front and their loved ones at home. As today, everyone going on holiday sent cards to dear ones and friends speaking of the weather, the lodgings and the bracing sea air. The sending of postcards began to decline around 1918 when the postal cost was doubled to one penny.

Following Colin's retirement, The Postcard Index is now run by Sandra Hewetson. Presently the Index holds 100,000 names and the cost of searches starts at £4.

The first card is dated 8th September 1904, postmarked Worcester. It is a picture of The Crypt, Worcester Cathedral, and is addressed to Miss Ethel N Sladden, Seward House, Badsey, Evesham. The message says: "I think this is one of the best of the series. JS" 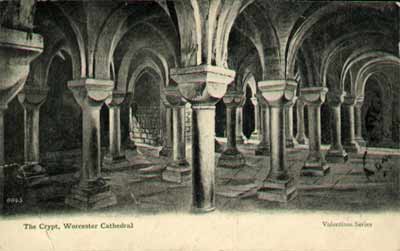 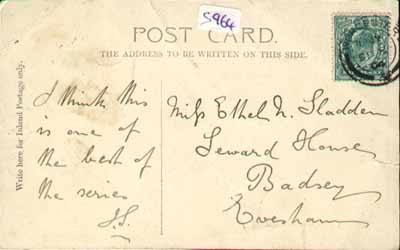 The Sladdens were prominent in Badsey society for over a hundred years. The author of the card, JS, is undoubtedly Julius Sladden (1848-1928, later Sir Julius Sladden), who had moved to Badsey in 1877 with his French wife and first-born son, having just started Sladden & Collier’s Brewery in Evesham. Julius had eight children in total, and Ethel (1882-1961), the addressee, was his fourth child and third daughter. Ethel never married and remained living at Seward House until her death.

The second card is dated 22nd November 1906. The description of the picture says it is "a hand-painted real photograph of a British beauty spot", and is addressed to Miss D Yeates, Fair View, Brewers Road, Badsey, Evesham. 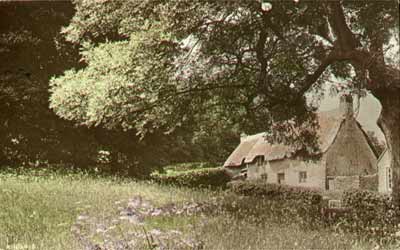 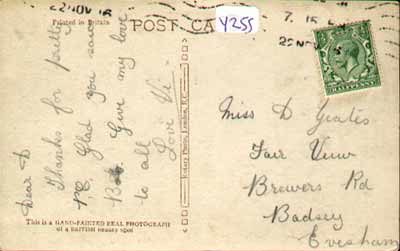 The Yeates family (or Yates, as they are referred to in some records) moved to Badsey at the beginning of the 20th century.

Fair View (not to be confused with Fairview, a detached house, dated 1913, situated in the High Street) was the name originally given to a terrace of four houses built on the north side of what is now known as Brewers Lane. The terrace was known as Fair View until about the 1960s, or probably whenever numbering was introduced. The house where the Yeates family lived was the third one (current No 41). When the terrace was built at the end of the 19th century, there would have been an uninterrupted view across fields, but around 1906, detached houses were built opposite them on the south side of the road. Throughout much of the 20th century, the road was called either Brewers Road or Brewers Lane, but is now definitely called Brewers Lane (named after James Brewer, the baker, who had a bakery on the corner of Brewers Lane and Chapel Street).

The Yeates family consisted of Annie Matilda Yeates (c1857-1934) and her children, Ernest (1888-1918), William Henry (1898-?), known as Bill, and at least two daughters, known as Flossie and Dossie. Ernest was killed in the Great War, and Bill and his two sisters, none of whom married, remained at Brewers Lane after their mother’s death, only moving in later years to Badsey Fields Lane. Bill was a Market Gardener, and Flossie and Dossie worked at home in the gloving trade. The "Miss D Yeates" on the card is presumably Dossie Yeates.

The photo below shows Bill Yeates and one of his sisters at Badsey Flower Show in the 1930s. 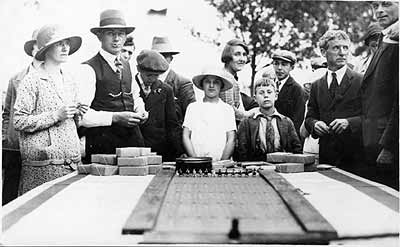 This horse-racing game was a popular attraction at flower shows and fetes. It was owned by Bill Yeates (wearing waistcoat with watch chain). One of Bill’s sisters is pictured far left. The horses were made to race by turning the handle which jogged them forward in a way that made the winner difficult to predict.