Wickhamford Celebrations in the 20th and 21st Centuries

The villagers of Wickhamford have always joined together at times of National celebration and the sections below show how these have been recorded and reported. For instance, The Badsey (with Aldington) and Wickhamford Parochial Magazine of September 1902 recorded that, to celebrate the Coronation of King Edward VII, “the children of Wickhamford were entertained at tea and had mugs presented to them, and sports were organized for them”.

In commemoration of the end of the Great War the previous November, children in the village were presented with souvenir mugs.

The Silver Jubilee of King George V, in May 1935, was celebrated at Wickhamford with great enthusiasm, according to a report in the Evesham Journal. A service was conducted by the Vicar at 2.45 p.m. where there was a large attendance and the singing was led by a choir specially trained for the occasion. Sports, in which young and old took part, followed and a substantial tea was served to all in the Reading Room, which was prettily decorated. A very pleasant part of the days’ proceedings was the presentation of an iced cake and bouquet to the village’s oldest inhabitant, Mrs Dinah Walters, who was 90 that day. This lady was in excellent health and able to receive the congratulations of many friends and relations. The young people finished the day with an impromptu dance.

Following death of King George V in January 1936 and the succession and abdication of King Edward VIII that year, King George VI’s Coronation was held in May 1937. A special Coronation service held at 10.00 a.m. was conducted by the Vicar, Canon W. C. Allesbrook. The Evesham Journal reported that at 2 p.m. a procession marched from Sandys Avenue to Mr Clifford’s field, where Mrs Bertha Drysdale opened the proceedings. She was presented with a souvenir as a mark of appreciation of her assistance. A fancy dress competition was held and all children under 14 years who were not prizewinners received a consolation award.

Childrens’ sports were held during the afternoon and later the youngsters adjourned to the Reading Room for tea. Adults’ teas followed, after which a sports programme for adults was carried through. From 6 p.m. until 9 p.m. a social was held in the Reading Room, the company listening during part of that time to the King’s speech. There was dancing until midnight. A bowling competition was held for a pig during the day. 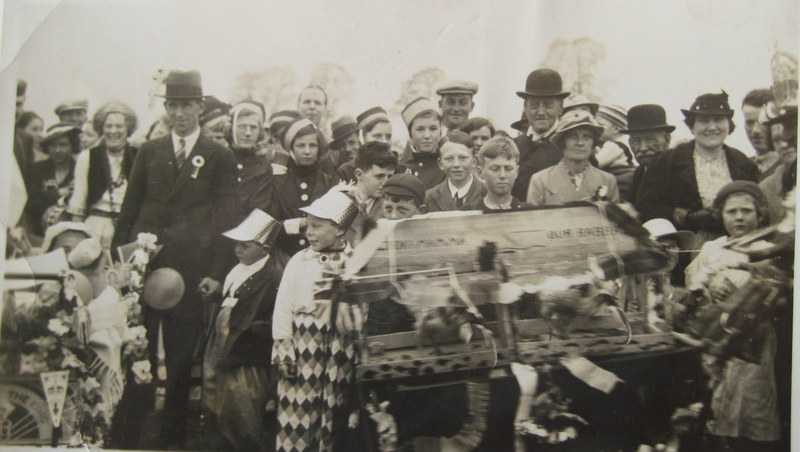 Following the sudden death of King George VI in February 1952, it was decided, in view of the economic climate, to delay the Coronation of Queen Elizabeth II until 2nd June 1953.  The day began with a well-attended short service at the church.  Later in the morning, villagers could watch the Coronation Ceremony and Procession on televisions in the Memorial Hall - two sets had been loaned by Messrs H. C. Dillworth of Evesham.

At 2 p.m. villagers assembled in Sandys Avenue for a fancy dress, decorated perambulators and bicycle parade.  A procession went to the Memorial Hall and en route a commemorative tree was planted at the junction of Manor Road and Manor Close by Mrs J. Mason.  At 3 p.m., the judging of parade events was carried out by Mrs Green, Miss E. Burrows and Mrs A. Burrows, with prizes presented at 4 p.m.  This was followed by tea for the children and each was given a souvenir mug and stick of barley sugar.  There were also prizes given for the "Gayest Gardens" in the village.  Musical entertainment in the afternoon was provided by Messrs Lyddiatt of Chipping Campden.

Sports were then held in a nearby field, by permission of Mrs R. Daffurn, from 5.30 to 6.30, Mr Green being in charge of the amplifier.  At 8 p.m. a Social and Dance began in the gaily decorated Memorial Hall and this lasted until midnight.  A jug, given by Mr W. H. Batty, of Wickhamford Manor, was won by Mr Dick Sutton.  A tea service, given by Mrs F. M. Dean was won by Mrs G. Hancock and a bottle of whiskey was won by Mr P. Sutton.  Mrs M. Sutton, who was described as "the grand old lady", who had given such a lot of help to the Memorial Hall, was presented with a box of chocolates.  A box of food was sent to each person unable to attend during the day. 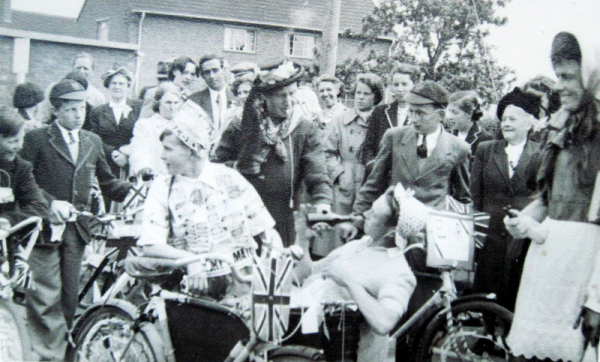 The Church made a presentation of specially inscribed New Testaments to children attending Sunday School.

As part of the Queen Elizabeth II Silver Jubilee celebrations in Wickhamford the largest and biggest cake to be cut was a yard long and a foot wide, reported the Evesham Journal. It took Mrs Pam Noyes of Pitchers Hill three weeks to make and among other things it contained 32 eggs, 14 lb of icing sugar and 7 lb of marzipan. It was constructed of 8 cakes joined together to make it large enough. Nearly 200 children sat down to tea in a marquee on the sports field and in addition, every family in the village was invited to a meal.

A Big Lunch at the Sports Club and grounds celebrated the Diamond Jubilee of Queen Elizabeth II in June. The weather was unseasonably cold and it rained for most of the afternoon, causing the abandoning of many planned outdoor games.

Despite the inclement weather around 300 people attended the celebrations and the children participated in face-painting, cup cake decoration and other events took place in the Clubhouse and marquees. The W. I. provided free tea and coffee, the Badsey Society had a display of village celebrations from bygone years and many watched the River Pageant on the Thames on a large screen in the bar of the Clubhouse.

Almost one hundred specially commissioned Jubilee mugs were presented as part of gift packs given to all of the children who came to the celebration.

Thanks are due to the many people who supplied photographs for this article. If any further material becomes available, of these or other village celebrations, the article will be updated.

A check through the Evesham Journals to look for references to events in Wickhamford to celebrate the Golden and Diamond Jubilees of Queen Victoria (1887 and 1897), and the Coronations of Edward VII and George V (1902 and 1911) has found nothing being reported. Similarly there were no mentions of village events to celebrate VE Day or VJ Day in 1945, although at least the former would have taken place. Any additional material to enhance this article would be welcomed.