The opening of the Wickhamford rifle butts

The Worcester Journal of 29th November 1873 reported on a new rifle butts that had been opened in Wickhamford.  In the first competition there, it was very windy and the scores were poor, but the Beauchamp Challenge Cup was won by Bugler H. Wood.  After the event, supper was laid on for the thirty-five competitors, at Evesham Town Hall, with catering by Mr Byrd of the Fleece Inn. 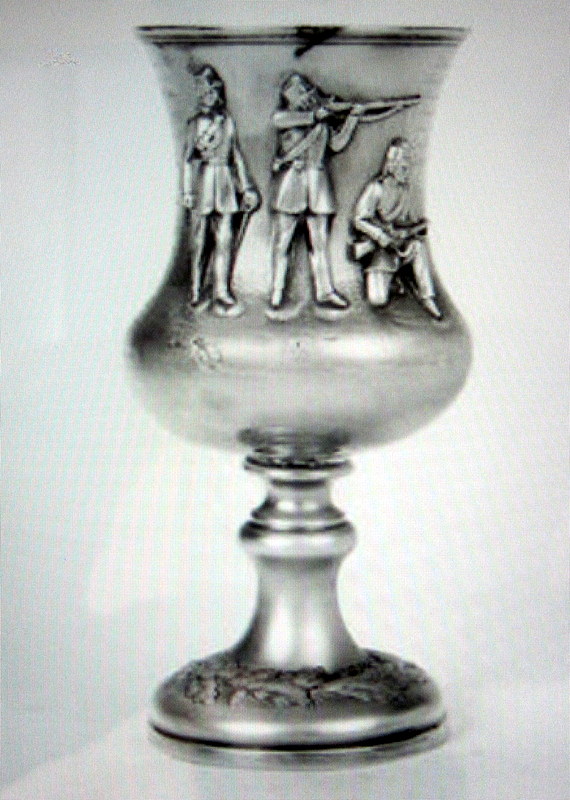 The Beauchamp Challenge Cup was a shooting trophy goblet made by Robert Garrard in 1861.  It has a thistle shape on trumpet foot, sides embossed in high relief with an officer and two volunteers in shakos to one side, the other with foliate cartouche flanked by military trophies and with crossed rifles below, engraved with an earl's coronet above initial "B" and inscribed "This challenge cup presented by Henry Beauchamp Earl Beauchamp to the 12th. or Evesham Company of Worcestershire Rifle Volunteers the property of the corps for ever to be held for 12 months by the member who has the honor of winning it, 1861" and further inscribed with the names of the winners for every year between 1861 and 1887, the foot chased with trailing oak leaves and acorns, 22cm. high, 13.5oz. (Information from Bonhams sale catalogue of 24th March 2005 when it sold for £576.)

The same newspaper, on 3rd April 1875, described a Bazaar held at Evesham to raise funds to free the local company of Volunteers from ‘an incubus of debt’.  Captain Byrch had been appointed to lead the Company eighteen months previously and an extra 40 recruits had since been enrolled; they now numbered around 90.  The expenses incurred included those for uniforms and the liabilities were considerably augmented by the cost of new shooting butts in Wickhamford.  Receipts from the three days of entertainment at the Bazaar raised about £182.

The Wickhamford butts or shooting range were still in use in the 1880s.  The Birmingham Daily Post reported on an event at the Wickhamford Rifle Range that had been held on Saturday 17th August 1889.  The fifth competition for the Beauchamp Cup and the member’s and Mayor’s prizes was run for the D (or Evesham) Company, 2nd Volunteer Battalion of the Worcestershire Regiment. Details of the prize-winners were given.

Further reports of events taking place at the Wickhamford range appeared in local newspapers in 1894, 1895 and 1897.   In May 1894, shooting took place over the standard distances of 200, 500 and 600 yards and the combined scores led to the awarding of the Beauchamp Cup and Member’s Plate.  Details of the best scores were given and Private George Gill appears to have been most successful. The following month a rifle club competition took place and some of the men, recorded in the Evesham Standard as taking part, were Lt F.C. Idiens, Pte T. Allard and Pte H. Grinnell.

In July 1895, the annual musketry training of the 3rd (Militia) Battalion of the Worcestershire Regiment took place.  There was a review of the Battalion at Norton Barracks, under the command of Col. Winsmore Hooper.  According to the Worcester Chronicle, the rifle range at Rainbow Hill had been closed a few months previously, due to its dangerous proximity to reservoir works at Gorse Hill.  As the range at Evesham had also been closed, another venue was sought and Wickhamford range chosen.   The Worcester Journal at this time reported that the 4th Battalion would, for 28 days, undergo training at Wickhamford, under the instruction of Capt. O.S. Martindale Vale, after the 3rd Battalion had left.

In May 1897, the range was still used by the military, as a competition was again held between members of D (or Evesham) Company.  The scores were very low, over the usual distances, with Capt. Haynes, having the best combined score, ahead of Pte F.W. Cook, Lt Prance, Pte Good and Pte Allard.  No further reports of the use of the Wickhamford shooting range appeared in the press for many years.  It presumably went out of use, as it is marked on the 1903 Ordnance Survey map as ‘Old Rifle Range’ in part of Field Farm adjacent to the wooded area known as ‘Porter’s Plantation’.  The fields where the rifle range was situated were called Murren Field and Lower Murren Field (the place the ‘Old Rifle Range’ was indicated on the map straddlesd these two fields).  A slightly earlier O.S. map (shown below), from 1899, shows the rifle range as being in a north/south direction next to the woods of Porter's Plantation. 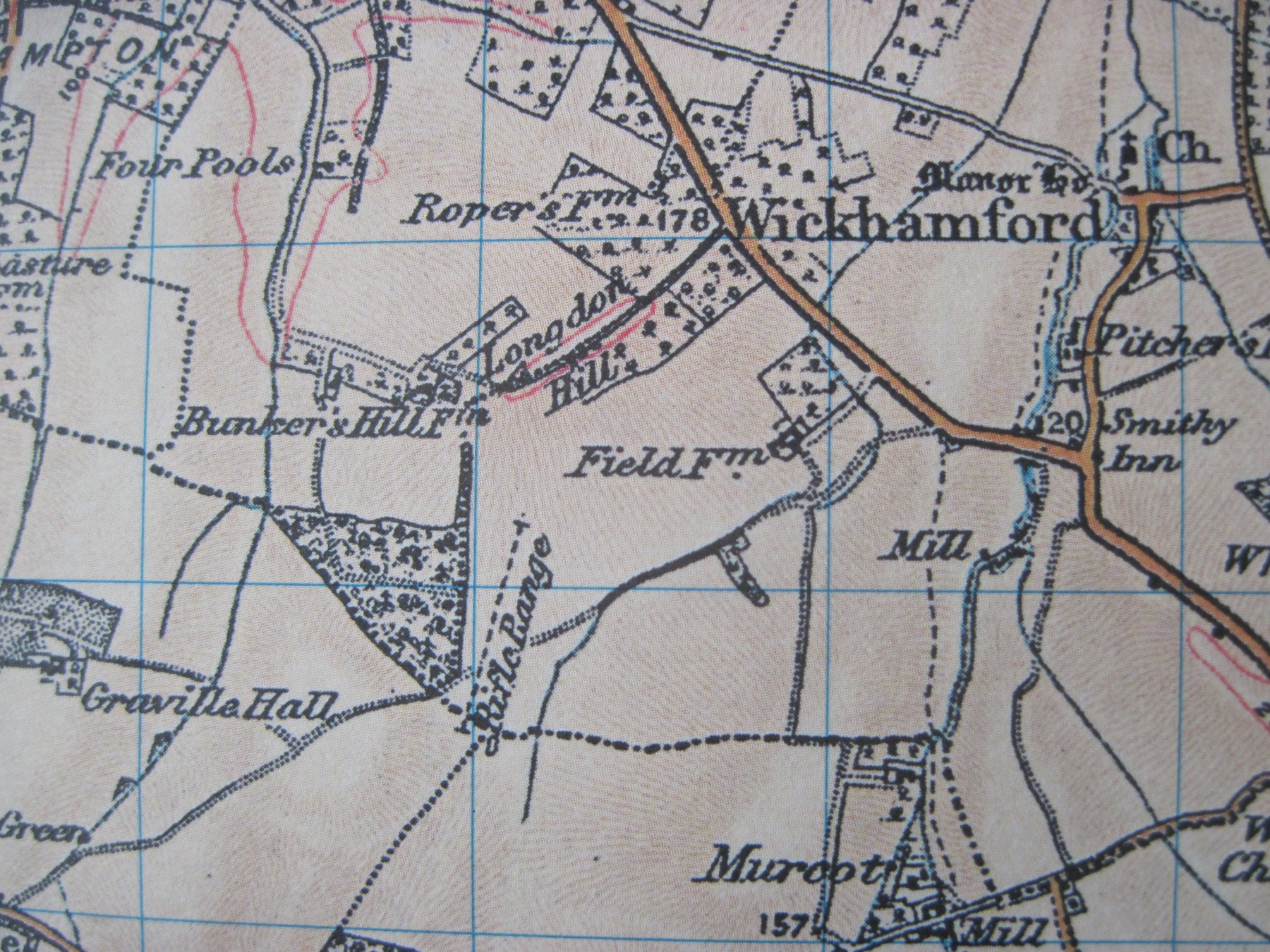 The report of a fox hunt, in the Gloucestershire Chronicle in 1908, mentions a pursuit starting at Porters Plantation, crossing The Butts and going towards Wickhamford Mill.

A rifle range was in use in the Second World War, which may have been in the same location, though not necesssarily of the same alignment.  In September 1941, an annual prize shoot was held in Wickhamford when the Evesham Company of Volunteers met.  They assembled at their depot at 7.00 a.m. and marched to the range, headed by their band.  Volley and independent firing were done by sections, with seven shots each at the usual 200, 500 and 600 yards.  Windy conditions and bad light apparently made high scoring difficult.

After the end of the War the land returned to agricultural usage.