The Badsey Flower Show celebrates its 120th Anniversary in 2023.  At one time it was known as the Badsey, Aldington and Wickhamford Flower Show, but in the years following the Second World War, there was also a Wickhamford Show. A very full report of the one that took place on 16th August 1947 appeared in The Evesham Standard the following week.

The Show was reported to have been a great success, but that attendances were reduced due to the great heat on the day.  There was brilliant sunshine and temperatures in the 80s.  The show was the fifth one staged by the Wickhamford Memorial Hall Fund Committee.  The exhibits were far superior to those seen at previous shows and the two judges, Mr J.E. Knight of Badsey and Mr H. Horne of Toddington, commented that the exhibits were well in advance of those seen at other shows in the district that Summer.

The Show was opened by Colonel John Arthur Lord, of Saintbury, who congratulated the Committee on their efforts to raise funds for a new village hall and wished the show every success. He was introduced by Major George Lees Milne, Chairman of the Committee.  The show was staged in a large marquee in one of Mr Victor Daffurn’s field at Elm Farm.  Within the marquee, together with the grower’s exhibits, was a magnificent display of dahlias and chrysanthemums on a trade stand of Messrs James Grove of Evesham. The vegetable and fruit exhibit classes were of exceptionally high quality. The outstanding success of the Show fell to Mr W. Knight, of Badsey, who took eight prizes and was highly commended on two occasions.

Following the opening there was a fancy dress competition for children, judged by Mrs Lumsdaine and Mrs Batty.  The clothes worn showed ingenuity and the winner was Betty Hancock, dressed as a silver replica commemorating the Wickhamford Flower Show first prize, and Ernest Robin Cox, representing a tramp came second.  Judy Mitten, dressed as a native, was highly commended.

There then followed the children’s sports, organised by Mr Ernest W. Sturt, who acted as starter and Mr Sydney Carter and Mr Edmund Cooke who were the judges.  Some exciting finishes were seen.  Also, during the afternoon, the various sideshows were thronged.  Perhaps the most popular one of all was bowling for the pig, which kept Mr A.E. Webb and Mr (Mac) Taylor busy in both the afternoon and evening.  The pig was won by Mr. Clarence H. Willis of Wickhamford.

A dance was held in the evening and was a great success.  Also, during the evening the exhibits were sold by Major Carter, the well-known commentator.  Bidding was slow at first but Mr Carter, with his witty remarks not only drew laughter from the crowd but gradually drew their money off them!  Afterwards he expressed his grateful thanks for the visitors support and Mrs Eva Cooke for presenting the prizes.  Mr Willis, at the dance, thanked the ladies who had helped, Mr Daffurn for the use of his field and Mr Parry for the electric lighting installation in the marquee.

The Evesham Standard, of 23rd August, gave detailed lists of the prize winners, second and third in each category of the exhibits and firsts and seconds in the children’s’ sports.  The results of the sports are shown below:

In The Evesham Standard report, the names of the adults appear only with initials, but where known, the Christian names have been added in this article.  The Wickhamford  Show was held for a few years and on at least one occasion took place in a field off of Wickhamford Lane.  Examples of Prize certificates from 1949-1952 are shown below.   In 1949, the Show was referred to as the Seventh Annual Show, but it is not known if the first show was in 1942, or held before the War.  It was usually held in one of Victor Daffurn’s fields near the Memorial Hall. 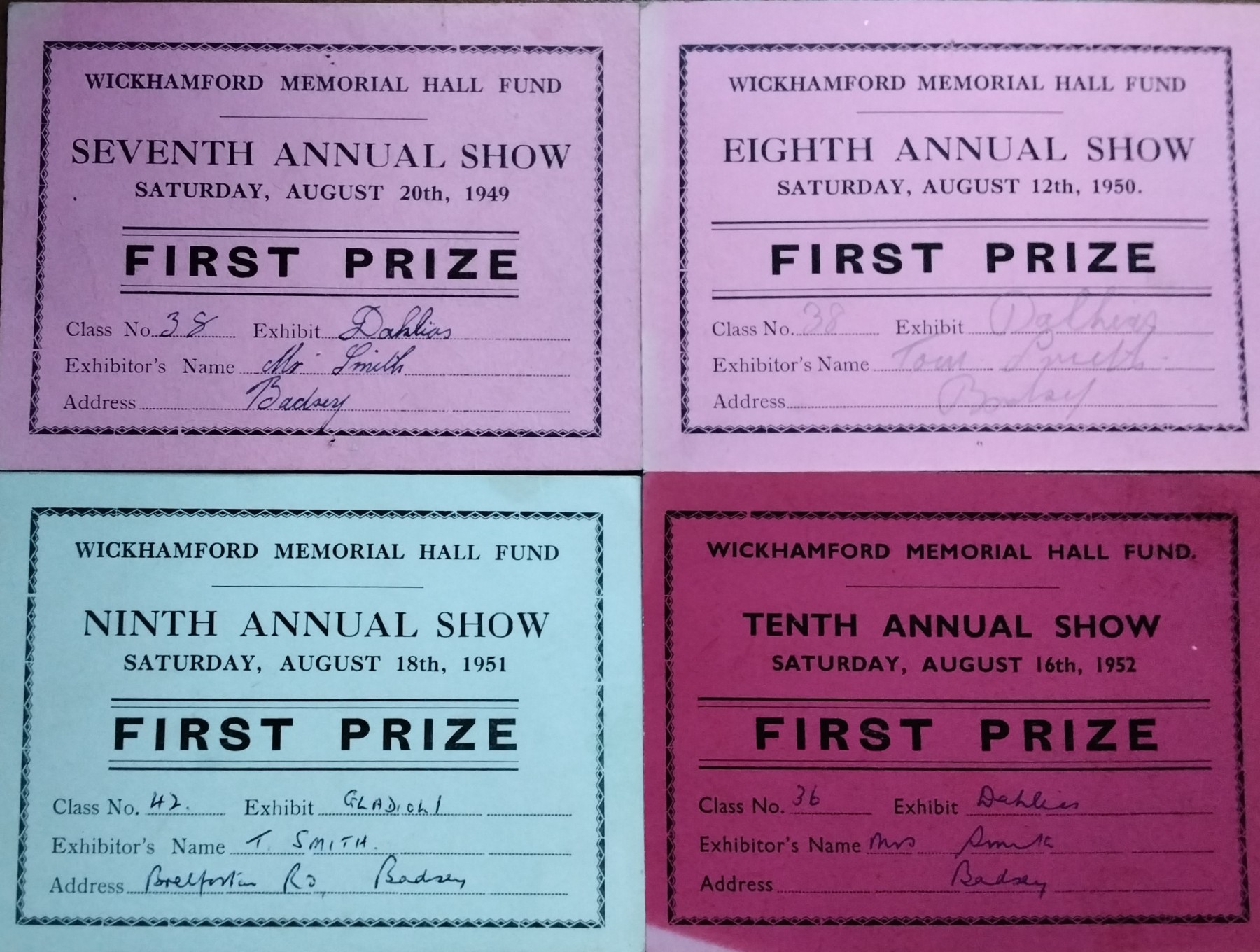 The photograph below was taken at the Show in 1950.  The identity of many people in this picture of the Fancy Dress competition can be found in the Village life section of the Photo galleries. 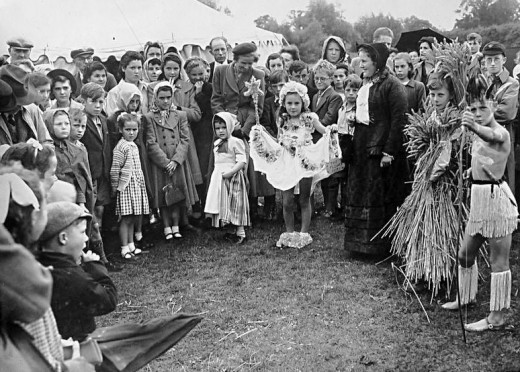 In The Evesham Standard there are two pictures accompanying the article.  This is to be found on the Newspaper Archive section of the findmypast website, but the quality of the images is very poor.  For completeness, they are shown below:

Thanks are due to Brian Smith for drawing attention to the Wickhamford Flower Shows and supplying the photograph of the Prize certificates.  Val Harman helped to identify the full names of many of the people mentioned in the newspaper article only by their initials.