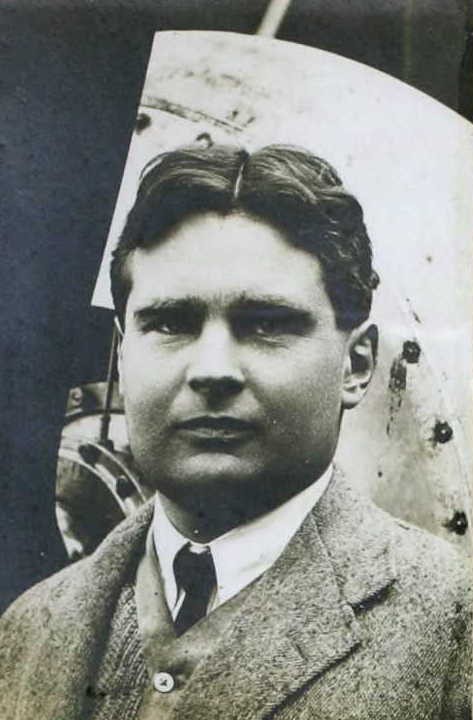 Pilot Officer John Mortimer Drysdale (1886-1970) was the elder son of Dr Alfred Edgar Drysdale and his wife, Bertha (née Chamberlain).  He was born in the village of Chateau D’Oex, Switzerland and educated at Shrewsbury School and Peterhouse College, Cambridge.  He studied Classics from 1905 to 1908, gaining a 2nd Class degree and then returned to take a course in economics in 1909.

John’s widowed mother, Bertha Drysdale, moved to Wickhamford in the latter part of 1911 and quickly became involved with the life of the village.  During the war, she was living at The Driffold on the Murcot turn off the Evesham to Broadway Road (it was this address which John Drysdale gave in 1916 when he was learning to fly), but later moved to Brookfield, next door to the Parish Room in Manor Road.  Sadness came to the family in April 1915 when John’s younger brother, Roger Gillespie Drysdale, sadly committed suicide; he is commemorated on the war memorial in Wickhamford Church.

John was commissioned as a 2nd Lieutenant in the Royal Flying Corps, having received his flying certificate on 1st April 1916 after training on Caudron biplanes.  No official record of his service has survived, but an exploit of his is recorded in the Badsey Parish Magazine of September 1916, as follows:

Lieut J M Drysdale, who was wounded in an air-fight behind the German lines on Aug 26 is, we are glad to hear, rapidly recovering. He received his wound when at an altitude of 2000 feet, but managed his descent so skilfully that he alighted at the spot from which he started. He was warmly commended by his CO for his gallantry and skill.

John was mentioned in despatches on 13th March 1918 and later that year was engaged in the “agreeable but responsible task of transporting distinguished passengers to and from France”, according to the Parish Magazine.

After the end of hostilities, having been transferred to the newly formed R.A.F in 1918, John received from Sir Woodman Burbidge, managing director of Harrods Stores, a gold cigarette-case in commemoration of the "first commercial flight". This took place on March 1 1919 when Captain Drysdale piloted Sir Woodman to Brussels.

In 1923, John married Enid Gwladys Openshaw, who had lived for a time at Bowers Hill Farm.