In the final year of the World War One, German prisoners of war were held at the Badsey Manor House and worked for local market gardeners. One of the Germans died at Badsey and was buried in Badsey churchyard.

During the war there was a shortage of labour to work on the land. The Board of Agriculture & Fisheries set up a scheme 'Employment of German Prisoner Ploughmen'. German Prisoners of war were moved to camps across the country to be available for work. There were about 23 camps in Worcestershire. The first prisoners arrived in the Evesham area in the summer of 1917. In February 1918 the Evesham Journal tells us one hundred prisoners were moved to the Badsey Manor House making a total of 420 prisoners in the Evesham District with others at Hampton House and Craycombe.

The Badsey prisoners worked for local market gardeners. Some of the prisoners in Evesham were skilled basket makers. This skill was an important for getting produce to market. Initially employers paid 4d per hour for the labour, of which the prisoner retained one penny. Correspondence in the Evesham Journal expressed concern that this was less than the going rate of pay and it was increased to 5d per hour to avoid a dispute about rate-cutting.

The Manor House at Badsey is said to date back to the fourteenth century. Just before the war it had been used as a boy's home. At that time the house still had a passageway through the middle wide enough for a horse and cart. The German prisoners were based in the Manor House surrounded by a high fence. The soldiers who guarded them were billeted near by in the Old School (now the British Legion) and their commandant, Lt. Stubbs, stayed with the Sparrow family on Willersey Road.

Small groups of prisoners were sent off to work wherever they were needed. A relationship of trust began to build up between the market gardeners and the prisoners. There is a story of a market gardener in Badsey lending a prisoner a bicycle to ride over to a field at the other end of the village. One employer sent his small child to escort a prisoner to work. Other stories also reflect the developing trust, although it is difficult to know whether they specifically relate to Badsey. The German prisoners may have formed a choir and sung for the villagers. There is a tale of a German prisoner carving toys out of wood to make Christmas presents for the children of a farmer who had treated him well.

For some the relationship between prisoners and locals was seen as too cosy. A writer in the Evesham Journal for 20 April 1918 expressed concern that he had seen 'young girls waving their hands and making overtures to the prisoners'. A farmer who had given his prisoners cider was deplored. Among the official papers in the Worcestershire Record Office there is a stern enquiry about a farmer who allowed a prisoner to hold his gun.

In May 1918 there was some excitement when three prisoners from the Drill Hall Camp at Evesham escaped while working at Langdon Hill. A search party was organised and Harry Kelland, a Badsey man, came across the three taking a rest in a spinney near Wormington and recaptured them.

The Badsey Parish Magazine for December 1918 tells us about the prisoner who died - "The Vicar was present at the funeral of Pte. Rosskopf, the German soldier who was buried at Badsey on November 16, but, the deceased being a Roman Catholic, Monsignor Patten officiated. The grave is near to those of our own three soldiers, who have died within the last twelve months. The German soldiers from the Manor House Camp attended and, at the close of the ceremony, filed past the grave, each casting a handful of earth upon the coffin according to custom. There were some beautiful wreaths. Pte. Rosskopf came from Bavaria and leaves a widow and two children. - R.I.P." The body of Johann Rosskopf was exhumed on 21 February 1963 and moved to a German cemetery at Cannock Chase.

Another entry in the Badsey Parish Magazine dated May 1919 reported "On several occasions lately about 50 prisoners of war from Badsey Manor House have attended the 11 o’clock Sunday service at Badsey Church, and there was a special celebration of the Holy Communion for them on Low Sunday when 47 communicated. The Bishop sanctioned the service and also the use of the SPCK German translation of the Book of Common Prayer." We do not know the exact date that the Germans returned home but it could not have been long after this.

'...So different indeed was another fence
That surrounded the Manor grounds
'Twas not the peacocks that strutted there
But German prisoners who made their rounds

Some of them worked for my father
While my brothers fought in the War
Some later returned, deploring with us
Yet another such war two decades more.'

Interviewed in 2001, Evelyn Mckanan-Jones could still remember the prisoners. She recalled that security was low and that there was a hole in the perimeter fence in Monks Path. She and a school friend talked to the prisoners and they were sometimes given sweets to eat.

There were also prisoners of war working in Badsey during the World War Two. They were based in a camp at Littleton and included Italians as well as Germans. Some stayed in the area and married local girls.

D. Wakefield wrote about visiting the house at the end of WW2: "Late 1944 we moved to Bretforton in the Vale of Evesham (Worcestershire) and then Badsey village bakery before moving into the servants half of a 14th century manor house that hadn’t been occupied since it held German prisoners of war in 1919. The dark solitary confinement cell was upstairs with the regulations in German. The kitchen was stone flagged and some 40 x 15 feet while the door key was iron and weighed almost a kilo. It was unheated so we lived in the buttery (lined with copper to keep out the mice we were told). Sanitation was a bucket. 3 feet outside the back door was a wooden cover over a 4 foot diameter well..." Wakefield's full story appears on the BBC website in the series WW2 People's War.

After the war, in 1947, the Manor House was split into two houses. The right hand side was occupied by a Dr Dennis Dickinson who installed stained glass panels in a number of the windows. Several of these have a German theme. One of these (illustrated below) bears the name Walter Von der Vogel Weide who was a twelfth century minstrel who roamed across Europe and wrote in German. He adopted the image of a caged bird as a personal symbol and this appears as a coat of arms on the stained glass panel. The imagery of a captured bird seems perfect for a house that was, for a short while, used as a prison.

Richard Phillips is grateful to Terry Sparrow, Michael Barnard, Will Dallimore, Peter Stewart and Nic Nicol of the POWIC project for help with this article. If you know more please contact us by emailing editor@badsey.net. 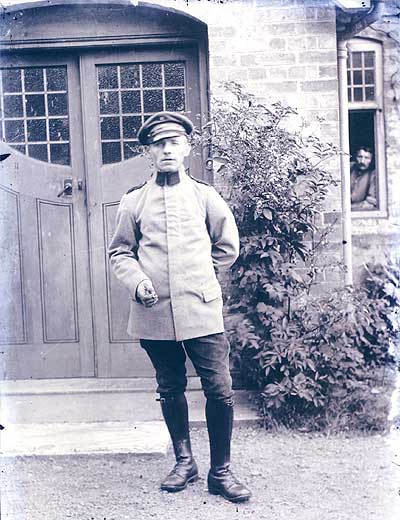 Can you help identify these photos: WW1 German prisoners of war in the Vale?

Patrick Jones contacted us in June 2003 with some of his father's memories of the prisoners:

'Your article on German Prisoners at Badsey is interesting. A group of them worked for my grandfather, Geoffrey Jones, Norfolk House, Badsey. My father, Geoffrey Austen Jones, had some stories about them. He remembered seeing meat for their consumption being carried unwrapped on an open dray from Badsey Station on a summer's day, covered with flies. One of the prisoners for some reason, possibly his insignia, was known as the 'green devil' and another, I think, as the 'red devil'. On the announcement of the Armistice, one of them asked whether Germany had won, and was crestfallen to learn that this was not the case.

'Large numbers of Italian prisoners were employed in Badsey during the Second War. They were a cheerful lot, not at all enthusiastic for hard agricultural labour.' 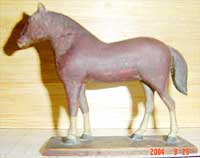 In October 2004 John Bird, who lives on Synehurst, sent us this photograph of a little carved wooden horse he inherited. One of the German soldiers carved it for his uncle Walter Bird for getting him a loaf of bread. The horse was finished with brown shoe polish.