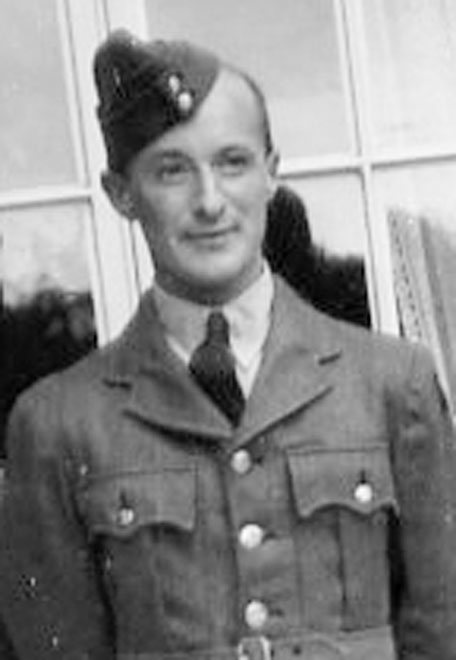 Philip Sparrow (1911-1976) lived all his life in Badsey except for a period of four years when he served in the RAF during the Second World War and was subsequently taken a prisoner of war of the Japanese.

Philip Henry Sparrow was born on 14th March 1911 at South View, Brewers Lane, Badsey, the elder of two children of Louis Henry Sparrow, a market gardener, and his wife Rosina Caroline (née Pittard).  He was less than a month old when his name appeared on the census return for 1911.  His father was killed during the First World War when Philip was five years old.

After leaving Badsey Council School, Philip was employed for a short time by Littleton & Badsey Growers Ltd, but then took up employment as clerk with Victor Cockerton in his market gardening business.

On the outbreak of the Second World War, Philip joined the Royal Air Force, serving with 242 squadron in the clerical branch.  In December 1941 the squadron moved to the Far East.  This was a time when thousands of British servicemen were being sent to the Far East as part of the Allied Forces’ defence of those territories against the Japanese.  Singapore fell to the Japanese in mid-February.

By March, Philip was in Batavia (modern-day Jakarta), capital of the Dutch East Indies, on the Indonesian island of Java.  With minimal military back-up, there was to be no “Dunkirk” evacuation for the men left defending Java, which was the “last bastion” after the fall of Singapore.  On 5th March 1942, Batavia fell to the Japanese.  The Dutch formally surrendered to the Japanese occupation forces on 9th March 1942, and the colony's government was transferred to Japan.

Philip, along with many others, became a prisoner of the Japanese.  During this time, Philip kept a diary and notes on scraps of paper, relating his experiences.  The original is said to be in the Imperial War Museum (though it does not appear in the online catalogue).  However, a booklet compiled by the Java FEPOW (Far East Prisoners of War) Club 1942, produced in the 1980s, contains edited extracts from his diary, and this is held in The Badsey Society archive.

The website of Java FEPOW Club 1942 describes the conditions in the camps:  “The abhorrent conditions in the camps in which the prisoners were held, along with the starvation, deprivation and brutality by their captors, are indescribable to anyone who did not experience this hell. The inhumane method of transportation of drafts between these camps gave little respite, these becoming aptly known as the ‘Hellships’.”

Philip’s diary, however, reveals that he was a man of inner strength and stoicism:  not once complaining at, or about his captors, his lack of food, his compatriots, nor bemoaning his luck.

For nearly two years, Philip’s family had no idea of his whereabouts.   Terry Sparrow, who was a schoolboy at the time, recalls that his great-aunt used to write to Philip almost daily, not knowing whether he was receiving them, or indeed, if he was still alive.  She found out at the end of the war that he did, in fact, receive one or two.  Then, in January 1944, Mrs Sparrow at last received a postcard from Philip to say that he was well, as reported in The Evesham Standard of 8th January 1944.  Terry Sparrow recalls that there were standard sentences on the postcard which could be crossed out or ticked as appropriate.  This was obviously a standard Field Service postcard where the first option was “I am quite well.”

Despite reassurances to his mother the previous year that he was fit and well, on 22nd June 1945 Philip wrote in his diary:  “I am 100 lbs compared to what I was at Makasura”.  In  mid July he noted that he had “lost another six lbs - nearly everyone has lost between 5 and 10 lbs since last being weighed.”

Fortunately, the end of the conflict was nigh.  The war finally came to an end on 15th August 1945 when victory over Japan was celebrated some three months after the victory in Europe.

On 6th September 1945, Philip wrote an air mail letter to say that he had been liberated from his prison camp, which was duly reported in The Evesham Standard of 22nd September.

The returning troops were inspected and were repatriated according to their fitness. The fittest went back home first, and so on. The infirm and weak were held back and attempts made to build up their strength, and generally fill out their frames somewhat; Philip was in this batch.  The troopship he returned home on was SS Almanzora.  He arrived back in England in the latter part of October and was able to return home to Badsey on Wednesday 24th October, as reported in The Evesham Standard of three days later.

Terry Sparrow recalls that he and his parents and brother walked the short distance from their home at the end of Brewers Lane down to South View Terrace, Brewers Lane, to join his great-aunt for Philip’s homecoming.  Philip duly arrived, driven to Badsey in a large, black car.  The Sparrows were not the only ones to welcome home.  The streets were gaily decked with flags and bunting, the church bells rang and many villagers had come out to line the streets.

In celebration of Philip’s return, a group of young men in the dead of night climbed the Wellingtonia tree on the High Street and placed the Union flag on the top.  A few years before the war, Philip himself had climbed to the top of the tree which was no mean feat.

Philip married Margaret Agnes Stratford at St Andrew’s Church, Hampton, on 11th October 1947.  In 1949, Philip bought a piece of land from his employer, Vic Cockerton, on which he had a bungalow built.  He named it Almanzora, honouring the name of the troopship which had brought him home to England after his years of incarceration at the hands of the Japanese.

Philip became clerk with the Badsey firm of F Stewart & Sons, market gardeners, subsequently being made a director of the firm.  Ill-health compelled him to retire in his early sixties.

Soon after his return home, Philip joined the Badsey branch of the Royal British Legion and, for the next 30 years, he dedicated his life to the work of the Legion.  He became secretary of the local branch and served in this office for many years, later being made a vice-president, and at the time of his death was president of the branch.

Throughout his life, Philip was connected with and took an active interest in many of the local organisations.  Philip became a member of Badsey parish council in 1958, serving as vice-chairman for several years, and was a sitting member at the time of his death.  For more than 30 years he served on the Badsey Flower Show Committee, for many years as Hon Treasurer.  He also served on the Badsey Remembrance Hall Committee both before and after the erection of the hall.   He had a great love for his church, being a member of the church choir for many years, a lesson reader and a sidesman.

Philip Sparrow died at Badsey on 1st April 1976, aged 65; an obituary was published in both The Evesham Journal and the Parish Magazine.  St James’ Church was packed to capacity for his funeral service; his coffin was draped with the Union flag.  Following cremation at Cheltenham, his ashes were scattered in the Garden of Remembrance at Badsey.  A table for the church was given in his remembrance with the following words written on the chrome plaque:

IN MEMORY OF
PHILIP HENRY SPARROW
1911-1976
THIS TABLE IS GIVEN IN GRATITUDE
FOR HIS SERVICE TO THE CHURCH
AND TO THE COMMUNITY.