Terry Sparrow of Badsey has written the following article about his great-uncle, Louis Henry Sparrow, who died aged 33 on 22nd October 1916.  Louis’ name is recorded on the war memorial in St James’ Church, Badsey, and at Badsey School, and on the Thiepval Memorial in France.

Louis Henry Sparrow was born at Atch Lench on 7th October 1883, the third son of Alfred and Lucy Sparrow.  About 1886 the family moved to Badsey, where Alfred took up market gardening.  At first they lived in a cottage – long since demolished – which stood on part of what is now the north-eastern portion of the churchyard and there the family was completed with the birth of a daughter in 1889.  Later they moved to the newly-built Summerfield Cottage (now No 14) in Badsey Fields Lane.

Alfred Sparrow became closely involved in church affairs at Badsey, serving four times as churchwarden, so it is hardly surprising that young Louis, aged only nine, joined the church choir, an activity which was to continue into adulthood.

After leaving school in 1897 Louis followed his father and elder brothers into the market gardening industry.  The 1901 census describes him as “worker”, but later he became self-employed as tenant of land at Long Furlong and Foxhill, part of the Byrd family’s Badsey Fields estate.

In 1910, by which time he had added bellringing to his duties as a choirman, he married his cousin, Rosina Caroline Pittard at her home parish in London and they made their home in Badsey at 1 South View Terrace (now 13 Brewers Lane).  Their children, Philip and Esme, were born in 1911 and 1914 respectively.

Following the outbreak of war on 4th August 1914, Louis soon volunteered for military service (conscription did not begin until early in 1916) and enlisted in the Worcestershire Regiment.  Several months of training followed, including a period at the Cornish town of Fowey, where he was able to undertake some spare-time bellringing.

In due course it was time for active service and Louis sailed for Gallipoli, almost certainly with the 9th battalion Worcestershire Regiment, which left Avonmouth on 24th June 1915 and reached its destination on 13th July.  The regiment’s 4th battalion was already there, having landed on 24th April at Cape Helles, where they met very fierce opposition from the Turkish army.  Within a week, a third of the men were killed (35), wounded (209) or missing (74).  Sadly the 9th battalion fared little better and just four weeks after arrival, the original strength of 998 had been reduced to 360 men fit for service, in spite of receiving 100 reinforcements.  Of the 28 officers, only five (including Lieutenant C E Sladden of Badsey) remained on duty.

But Louis Sparrow survived the early carnage and on 15th September his friend and fellow Badsey choirman, John E Knight, in a letter to Reverend W C Allsebrook, Vicar of Badsey, wrote as follows:  “I thought you might like to know that both L Sparrow and JE are in the best of health and spirits so far”.  A month later, Louis himself wrote in similar vein, but sadly his good fortune did not last and before the end of the year he was badly wounded, thus ending his part in the ill-fated Gallipoli campaign.  He was evacuated to hospital in Malta.  Writing to the Vicar on 1st February 1916 he said he was feeling better and, with a market gardener’s interest in the local crops, noted that pea picking would soon begin and the tomatoes had been planted out. 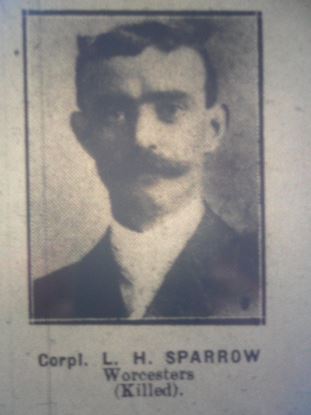 Later that year Louis left Malta and returned to England and a short spell at home.  Then, although still not fully fit, he was sent to France, where he was posted to the Worcesters’ 1st battalion.  On 21st October the battalion was holding the front line near the village of Gueudecourt, in spite of coming under heavy bombardment from the enemy’s artillery, leading to 54 casualties on that day.  To compound the misery the weather was bitterly cold and the trenches were waterlogged.  The next day “passed without notable incident”.  Nevertheless it was on that day, Sunday 22nd October 1916, that Corporal L H Sparrow (No 20750) was killed when a shell landed on his dugout.  He was aged 33.

As a mark of respect for him the Badsey church bells were rung, half muffled, on the afternoon of 14th November and later that day the church was packed for a memorial service.  On 3rd December the bells were again rung in his honour when members of the Worcestershire and District’s Association of Change Ringers came to Badsey and rang a peal of 5040 changes of Grandsire Triples.

During the summer of 1918 Louis was again remembered when a brass memorial plate was fixed to the wall of the church chancel, near to the seat which he had occupied for many years.  The inscription included the words, “for 24 years a member of the choir of this church and for 14 years one of the band of ringers”. 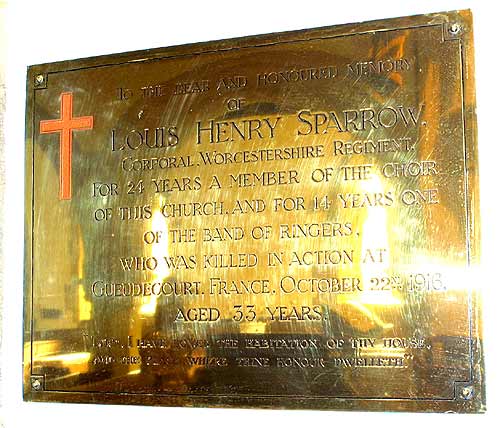 Postscript – On Sunday 23rd October 2016 during Evensong, Terry Sparrow gave a short homily on his Uncle Louis.  A special piece of ringing was also dedicated to Louis Sparrow which has been recorded on the Bellringers’ “Roll of Honour” list, held and maintained by The Central Council of Church Bell Ringers.