The following notice appeared in The Worcester Journal of 2nd June 1855: 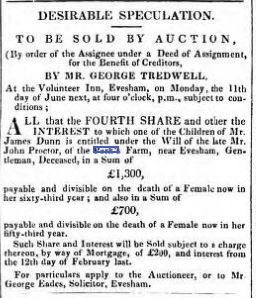 DESIRABLE SPECULATION
TO BE SOLD BY AUCTION
By order of the Assignee under a Deed of Assignment,
For the Benefit of Creditors,
BY MR GEORGE TREDWELL
At the Volunteer Inn, Evesham, on Monday the 11th day of June next, at four o’clock pm, subject to conditions:

ALL that the FOURTH SHARE and other the INTEREST to which one of the Children of Mr James Dunn is entitled under the Will of the late Mr John Proctor of the Parks Farm, near Evesham, Gentleman, Deceased, in a Sum of

Payable and divisible on the death of a Female now in her sixty-third year; and also in a Sum of

Payable and divisible on the death of a Female now in her fifty-third year.

Such Share and Interest will be Sold subject to a charge thereon, by way of Mortgage, of £200, and interest from the 12th day of February last.

For particulars, apply to the Auctioneer, or to Mr George Eades, Solicitor, Evesham.

The following year, this notice appeared in The Worcester Journal for several weeks in June 1856: 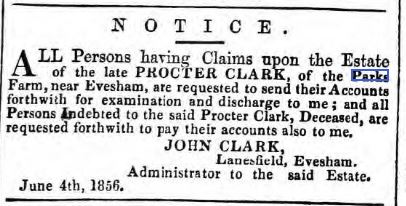 ALL Persons having Claims upon the Estate of the late PROCTER CLARK of the Parks Farm, near Evesham, are requested to send their Accounts forthwith for examination and discharge to me; and all Persons Indebted to the said Procter Clark, Deceased, are requested forthwith to pay their accounts also to me.