A notice of the sale by auction at The Fleece Inn, Evesham, of Blackminster Lime and Stone Works appeared in The Birmingham Journal of Saturday 3rd September 1853: 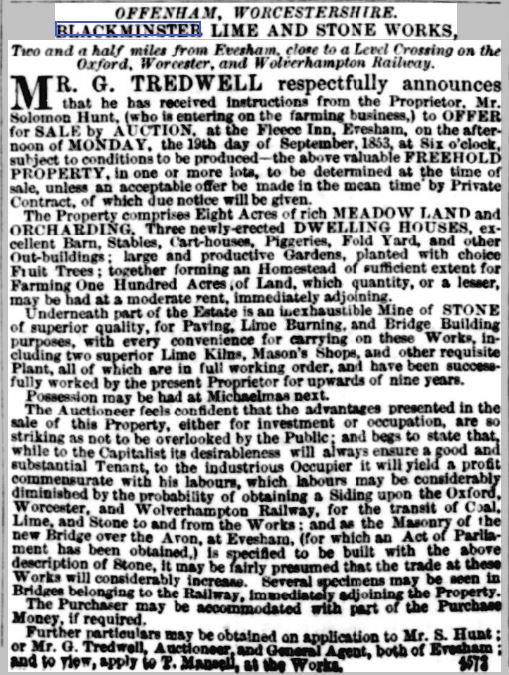 OFFENHAM, WORCESTERSHIRE
BLACKMINSTER LIME AND STONE WORKS
Two and a half miles from Evesham, close to a Level Crossing on the Oxford, Worcester and Wolverhampton Railway.

Mr G Tredwell respectfully announces that he has received instructions from the Proprietor, Mr Solomon Hunt (who is entering on the farming business) to offer for sale by auction at the Fleece Inn, Evesham, on the afternoon of Monday, the 19th day of September 1853, at six o’clock, subject to conditions to be produced – the above freehold property, in one or more lots, to be determined at the time of sale, unless an acceptable offer be made in the mean time by private contract, of which due notice will be given.

The property comprises eight acres of rich meadow land and orcharding.  Three newly-erected dwelling houses, excellent barn, stables, car-houses, piggeries, fold yard, and other out-buildings; large and productive gardens, planted with choice fruit trees; together forming an homestead of sufficient extent for farming 100 acres of land, which quantity, or a lesser, may be had at a moderate rent, immediately adjoining.

Underneath part of the estate is an inexhaustible mine of stone of superior quality for paving, lime burning and bridge building purposes, with every convenience for carrying on these works, including two superior lime kilns, mason’s shops and other requisite plant, all of which are in full working order, and have been successfully worked by the present proprietor for upwards of nine years.

Possession may be had at Michaelmas next.

The Auctioneer feels confident that the advantages presented in the sale of this property, either for investment or occupation, are so striking as snot to be overlooked by the public; and begs to state that, while to the capitalist its desirableness will always ensure a good and substantial tenant, to the industrious occupier it will yield a profit commensurate with his labours, which labours may be considerably diminished by the probability of obtaining a siding upon the Oxford, Worcester and Wolverhampton Railway, for the transit of coal, lime and stone to and from the works; and as the masonry of the new bridge over the Avon at Evesham (for which an Act of Parliament has been obtained) is specified to be built with the above description of stone, it may be fairly presumed that the trade at these Works will considerably increase.  Several specimens may be seen in bridges belonging to the railway, immediately adjoining the property.

The purchaser may be accommodated with part of the purchase money, if required.

Further particulars may be obtained on application to Mr S Hunt or Mr G Tredwell, Auctioneer and General Agent, both of Evesham; and to view, apply to T Mansell at the Works.