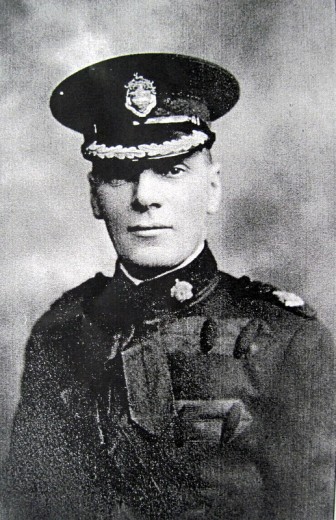 This is Ernest William Sturt pictured as Chief Constable of Bacup Borough Police Force in Lancashire (1920-1938). He first joined the Police in Reigate, Surrey in 1906. He retired in Bacup in 1938 and came to Wickhamford to run Leystones Garage through the Second World War. During the War he was A.R.P. warden for the village and Officer Commanding 'G', Evesham, Company, 2nd Cadet Battalion, The Worcestershire Regiment. He lived in Weathervane Cottage, Manor Road and died in 1963, aged 77.

Here is another picture of him taken to celebrate his Golden Wedding Anniversary with his wife, Clara Eliza nee Kemp, in 1959.

The photos were lent to us by Ernest Sturt's grand-daughter, Pam Corbett.