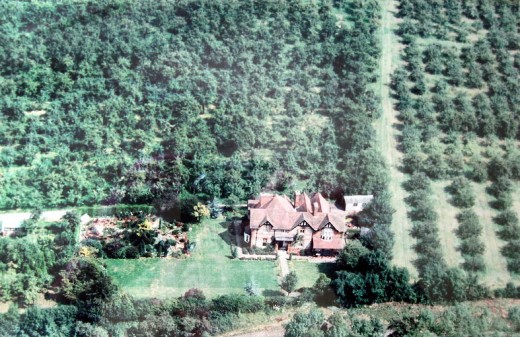 The aerial photograph shows the large house that once stood on the brow of Longdon Hill (north side) and known as 'Carrig'. The picture was taken in 1961 and shows the house drive going down to the old A44, before it became a dual carriageway.

Below is a later picture of the house, shortly before it was largely demolished.  A part of the property is incorporated into the present numbers 7 and 8 Longdon Court.

Here is an article about Alfred Woodall who lived at Carrig for about 25 years. He made an impact on the local community as a fruit grower, active member of Littleton & Badsey Growers, and of the Congregationalist Church in Broadway.

The pictures were kindly lent to us by Pam Payne.