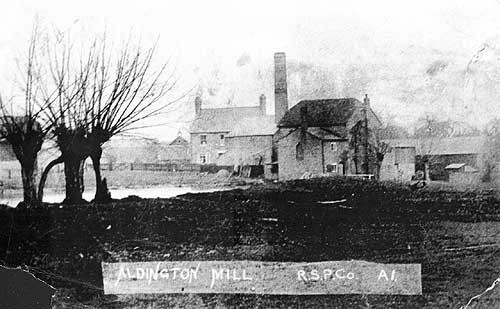 This photograph of Aldington Mill appears to date from the early twentieth century. Today, if you stand on the footpath alongside Badsey Brook, Mill House with its two chimneys is still there. But all the mill buildings in the foreground have disappeared. Tony Jerram has suggested that the chimney stack may have been for an engine used as a reserve source of power when water levels were low. Can anyone confirm this?

The Domesday Book recorded a mill at Aldington in 1086 but it is not known whether it stood on the same site.

We are grateful to Gill Stewart for lending us this picture.