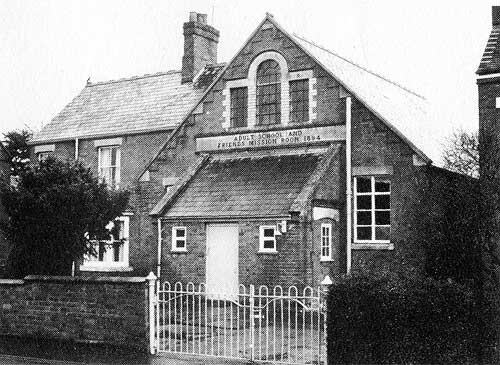 The inscription reads 'Adult School and Friends Mission Room 1894'. It was built as a Quaker Meeting House but has sometimes been used by other denominations. About 1980 it ceased to be a religious building and today has become the CG Dance Club .

Benjamin G Cox in Chapels and Meeting Houses in the Vale of Evesham suggests that the name Chapel Street was in use earlier than 1894 when the Mission Room was built and so there may have been a previous building. There is no evidence of this on the 1883 large scale OS map and it is unclear where Cox found this information. Badsey's Methodist chapel was demolished in 1869. Terry Sparrow writing in A Brief History of Badsey and Aldington offers convincing evidence that the Methodist Chapel stood close to the site of 28 High Street, on the other side of the church from the Mission Room.