When the National Farm Survey was carried out in the early part of the Second World War, Pitchers Hill Farm, Wickhamford, was in the hands of Albert Edward Carter.  The survey gives details of the cropping, livestock and farm machinery – the land amounted to 120 acres and there were 44 cattle of various ages plus a couple of pigs and some poultry.  In the details, it records that the farm was owned by a “Miss Carter of The Glen, Stales, Hexham”, which is in Northumberland.  The location was wrongly spelt and should have been “Slaley”.

The farm with its Georgian house – Wickham House – is now called Wickham Farm, and the farm buildings are on Manor Road, Wickhamford.  At the time of the 1911 census, the Smith family were living there. Broadway-born William Smith was 33 years of age and he and his wife, Elizabeth, had been married ten years and they had seven children, aged 6 months to 9 years.  When the Valuation Survey was conducted in 1913, the farm was owned by the Trustees of the Estate of John Pickup Lord and William Smith was the occupier.

William Smith died at the early age of 42, in late 1921, and he must have acquired the farm by that time as it was put up for auction at the King’s Head Hotel, Evesham on 6th February 1922.  Apart from the house and farm buildings there were a little over 89 acres of land, the whole property being sold in two lots.  The details in the advertisement for the auction, state that the property was “in the occupation of the Executors of the late Mr William Smith (the owner) and is to be sold in consequence of his death”.  This meant that, at some point between 1913 and 1921, William Smith had purchased the farm from the J.P. Lord Estate Trustees.  At the time of his death his six sons would have been aged only between 3 months and 17 years, so would not have been able to inherit and run the farm.

The Carter Family in Wickhamford

By 1922, a branch of the Carter family, which originated in North Somerset, was living at Field Farm.  In 1913, Benjamin Carter (1842-1926) was renting the farmhouse and parcels land from various owners.  His son, Albert Edward Carter, became the tenant at Pitchers Hill Farm in 1922, but it was another member of the Carter family who had bought the property, presumably at an auction. 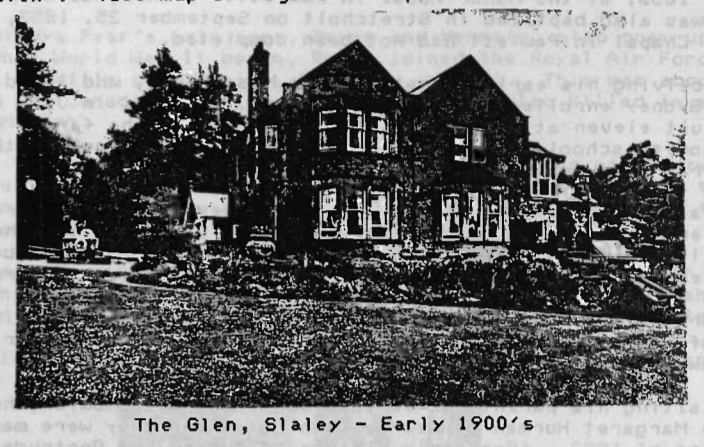 Benjamin Carter’s younger brother, Sydney Fletcher Carter (1853-1937), had originally worked for his father, John Carter (1814-1901), in a coal business at Combwich, Somerset, and, after a couple of years, he had obtained a position with a yeast distribution firm, Mawson, Swan & Co., in Newcastle upon Tyne.  He married Gertrude Margaret Hurman of Cannington, Somerset, in 1883 and they had a daughter, Ella Margaret, on 17th May 1884, who was born in Northumberland.  Sydney’s business was quite profitable and the family obtained a large country home west of Newcastle, near the small village of Slaley. “The Glen” was surrounded by pasture and several acres of woods.

By the 1911 census, Sydney Fletcher Carter was a widower, employer and a “Merchant (Yeast and Eggs)”.  He had been born in Pawlett, Somerset and lived with his daughter, Ella, and four servants at The Glen.

Sydney had no other children and arranged for a nephew, Stanley Carter, to go to live with them to learn the business.  Sydney Fletcher Carter became ill during the winter of 1936 and died on 20th August 1937.

When the 1939 Register was made, the Carter household at “The Glen, Hexham Rural District”, consisted of Ella M. Carter, a Farmer and Director, with a cook, housemaid and kitchen maid.  It would appear, from the National Farm Survey records, that Ella inherited the ownership of Pitchers Hill Farm on her father’s death in 1937.

At some point Sydney Carter must have also bought Wickhamford Mill and probably some nearby fields. The Mill was run by generations of different Smith family until 1922, when Jane Smith died.  A succession of tenants lived at the Mill in the inter-War years, but it was eventually sold to Austin Llewellyn Daffurn in May 1952, by Ella Margaret Carter.

A report in the press in Newcastle, said that Ella Carter died on 12th January 1965, having moved the previous year from Harrogate to Gosforth, Newcastle.  She left the large sum of a little over £128,000.  (This is equivalent to about £1.7m at the time of writing.)  In her Will, she asked for the interest from £500 to be paid to Pawlett Methodist Chapel, Somerset. During her lifetime she had helped with the addition of a Sunday School room, an organ and the general redecoration of the Chapel. The Carter family had, for generations, been non-conformist worshippers. (Her uncle, Benjamin Carter, was involved in raising money for the building of the Wesleyan Church by the river in Bridge Street, Evesham.)

After the Second World War, Pitchers Hill Farm was sold to Leslie Poulter and it is still owned by the Poulter family. Albert Edward Carter's widow put the 'furniture and effects' up for auction, on 28th August 1952.

Thanks are due to Bronwen Pfister for information on the Carter family history and photographs.