SANDYS (17th century) – The Sandys Family and the Virginia Company 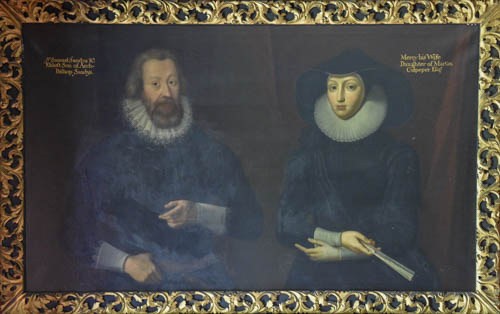 Samuel Sandys married, in 1568, Mercy Culpepper, who was a daughter of Sir Martin Culpepper (1580-1604), of Deane, Oxfordshire. Samuel was Sheriff of the County of Worcestershire (1612) and an M.P. in 1616 and 1622.  He was also a member of the Council of the Virginia Company.  Their daughter, Margaret Sandys (ca1593-1644) married Sir Francis Wyatt, who became Governor of Virginia in 1621-1626 and again in 1639-1642. He appears on a muster role taken in Virginia on 24th January 1645/25. Margaret’s name was not recorded and, although she accompanied him to the Americas, she had by then returned to England.  Sir Samuel and Lady Mercy Sandys are buried in the chancel of the Church of St John the Baptist, Wickhamford.

Edwin Sandys was educated at Merchant Taylor’s School and Corpus Christi College, Oxford and was first elected Member of Parliament for Plympton Erle in 1589.   In 1599, he paid court to James VI of Scotland and on Elizabeth I’s death, in 1603, was knighted by the new king.  He became M.P. for Rochester in 1614, and then High Sheriff of Kent (1615-1616), with a country seat, near Deal, at Northbourne, Kent.

He had been connected with the East India Company before 1614 and became Treasurer of the Virginia Company of London in 1619.  He instituted a programme to give investors and settlers incentive to emigrate to the New World.  The scheme provided planters who had arrived in Jamestown, Virginia, before 1616 with 100 acres of land (reduced to 50 acres for those who arrived after 1616). His programme promoted indentured servitude for the poor of England who could try to make a better life for themselves in the colony. He later assisted the Pilgrim Fathers in establishing their colony at Plymouth, Massachusetts.  Although he never travelled to Virginia, he continued to work to support the colony until the Company was dissolved in 1624, and Virginia became a royal colony.  Edwin Sandys died in 1629 and was buried in the St Augustine’s Church at Northbourne.

The Virginia Company established a settlement in Bermuda called Virgineola in 1612. In 1615, the colony was renamed Somers Isles, in commemoration of Sir George Somers, Admiral of the Virginia Company.  One of the parishes in Bermuda is called Sandys Parish, and was named after Sir Edwin Sandys (see map in Notes)

Although Edwin never travelled to Virginia, his younger brother, Thomas Sandys, was one of the first colonists in Jamestown. On 14th May 1607, 104 English men and boys established the settlement. They arrived on three ships – Susan Constant, Godspeed and Discovery – and a list still survives of their names.  Amongst the artisans, labourers, fishermen and soldiers are a number of Gentlemen, including Thomas ‘Sands’ – this is how the surname ‘Sandys’ was pronounced. Two more supply ships arrived in 1608.  Thomas Sandys later returned to England, but the Jamestown community suffered terrible hard times in its early years, due to starvation, Indian attacks and disease.  He had married Margaret Tyas, in April 1600, at St Andrew by the Wardrobe, Middlesex. Little more is known about the life of Thomas Sandys, but his death is said to have occurred in 1634, in Kent.

Thomas’s eldest son, Robert Sandys, married Alice Washington, at Althorp, Northants in 1628 and he died in Virginia in 1634.  Alice had been born at Sulgrave Manor, Northants, in 1610 - the home of the Washington family from the mid-16th century until the mid-17th century.  She was a distant cousin of Penelope Washington, who died in Wickhamford in 1697, and is buried in the chancel of the Church of St John the Baptist.

The youngest son of Archbishop Sandys was George Sandys. He studied at Oxford, but took no degree. In April 1621, he became Colonial Treasurer of the Virginia Company and sailed to the colony with the new governor, Sir Francis Wyatt. When Virginia became a crown colony, George Sandys was created a Member of Council in August 1624.  A population count or ‘muster’ was taken, in early 1624/5 (of the living and the dead) whilst he was in Jamestown. Below is the entry concerning George Sandys with the spelling etc as printed in MUSTERS OF THE INHABITANTS IN VIRGINIA, pp234/235:

George Sandys was re-appointed to the Council in 1626 and 1628 but when he tried, in vain, to become secretary of a new special commission for better plantations in Virginia, he returned to England.  After this he travelled widely through Europe and the Middle East, writing narratives of his journeys.  He died in Boxley, Kent in 1644 and is buried in the chancel of the village church.

One of Archbishop Edwin Sandys’ daughters, Anne, married Sir William Barne, of Woolwich, Kent in 1586, who was Lord Mayor of London (1586-87).  He was a subscriber to the 2nd Virginia Company*, having paid the Treasurer £37 10s 0d for three years of stock.

The early settlers in Virginia often came from the estates of gentlemen connected with the Virginia company.  Given the kinship of Edwin, Thomas and George Sandys to Sir Samuel Sandys of Wickhamford Manor, it would not have been surprising if some of his tenants were persuaded to go to Virginia.

The Parish Registers for Wickhamford in the period 1570-1590, contain about twenty surnames and these have been compared to the lists of settlers arriving in Jamestown in 1607 and 1608, but no connections have been made. The Rev’d Braby, in the Guide for Visitors leaflet (1971), about the Church of St John the Baptist, wrote that, due to the Sandys connections to Jamestown and the Virginia Company, it was possible that some of the early colonists were Wickhamford villagers. He had no proof of this but further research may find such a link.

The first colonists were mainly English, with a few from some other European countries.  Until 1619, the plantations were worked by white indentured servants.  These agreed to work in exchange for passage, room, board and the promise of land or money after a period of from three to seven years. Tobacco was one of the first crops to be produced, with it being successfully grown from about 1614.  The first documented African slaves did not arrive before 1619.

*The Second Virginia Charter, also known as the Charter of 1609 (dated May 23, 1609), is a document that provided "a further Enlargement and Explanation of the said [first] Grant, Privileges, and Liberties", which gave the London Company adventurers influence in determining the policies of the company, extended the Company's rights to land extending "up into the Land throughout from Sea to Sea", and allowed English merchant companies and individuals to invest in the colonization effort.