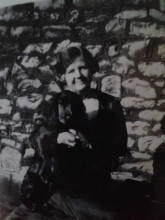 Ethel Mary Leonora Japp, née Tyrrell (1870-1955), was the employer of Mela Brown Constable when she worked in her household from 1913-1914 as governess to her younger children.

Ethel’s mother married again in 1880 to Andrew Webster Morrice, metal broker and commission agent who was a widower with five sons.  Mother and daughter went to live with him at his home in Oxton.  Soon, three half-siblings came along to add to the five step-siblings.

In 1891, Ethel married Francis Vivian Japp, a shipbroker, in Birkenhead.  At the time of the 1891 census, they were staying at the Hotel Metropole, Brighton, so possibly they were on their honeymoon.

Francis died in 1919.  Ethel then lived in various places in the London area, until moving to live with her youngest daughter, Eve, and her family at Avon Leys, Tiddington Road, Stratford on Avon.  Ethel died there on 24th January 1955, aged 84.