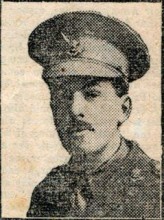 James Norman Lancaster (1888-1915) was a fellow officer of Cyril Sladden’s in the 9th Battalion Worcestershire Regiment.  He is mentioned in two letters written by Cyril.

James was born in 1888 at Handsworth in Staffordshire, the youngest of five children of William James Lancaster by his first wife, Annie (née Davis).  At the time of the 1891 census, the family was living at 76 Wood Road, Handsworth.  James’ mother died in 1896 when James, or Jimmie as he was known to the family, was eight years old.  His father married again the following year to Florence Eleanor McMichael and the family moved to Pine Crest, Shepley Road, Barnt Green.  Three half-sisters were born but, just a few years later, tragedy struck again when his step-mother, Florence, died in 1902, just 13 days after the birth of her third child.

James was educated at the Edgbaston Proprietary School, King Edward’s High School, New Street, and then at Birmingham University, where he served for three years in the Officers’ Training Corps.  On graduating, James trained as an optician and joined the family firm.  His grandfather, another James Lancaster, had founded an optician firm for the manufacture of spectacles, large microscopes and telescopes.  By 1870, the company was managed by James’ father, William James Lancaster; it was around that time that the firm also became involved in the photographic business.  The 1911 census refers to James as an optician, when he was living at home in Barnt Green, with his widowed father; his will refers to him as a camera manufacturer’s manager and his address was given as 182 Northfield Road, Kings Norton.

On the outbreak of war, James applied for a commission and on 31st August was attached to the 9th Service Battalion of the Worcestershire Regiment.  He met Cyril Sladden whilst training in England and in March 1915 went with Cyril to a concert in Guildford.

The 9th Worcesters set sail from England in June 1915, bound for the Gallipoli peninsula.  James was killed in action on 10th August 1915, during the assault on Chunuk Bair, Anzac.  His name is recorded on the Helles Memorial and on the University of Birmingham War Memorial.