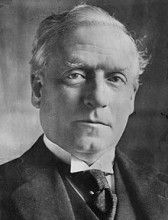 Herbert Henry Asquith, 1st Earl of Oxford and Asquith (1852-1928), generally known as H H Asquith, was a Liberal Party politician who served as Prime Minister from 1908 to 1916 and was the last Prime Minister to lead a majority Liberal government.

Asquith was born on 12th September 1852 in the West Riding of Yorkshire.  He was educated at Huddersfield College, a Moravian Church school at Fulneck, City of London School and Balliol College, Oxford, where he had won a classical scholarship.

Asquith trained as a barrister.  He entered parliament in 1886 as MP for East Fife and served as Home Secretary from 1892-1895 in Gladstone's last ministry.  On the Liberal party's return to power in 1905, he served as Chancellor of the Exchequer under Henry Campbell-Bannerman, succeeding him as Prime Minister in 1908.  In the period until the outbreak of war, his government undertook ambitious social welfare legislation, which included provisions for old age pensions in 1908, and unemployment insurance in 1911.  In the years immediately before the First World War, the Liberal government embarked upon a process of rearmament for the Royal Navy, a task necessitated by Germany's growing investment in its naval forces.  In order to finance these reforms, Asquith and his Chancellor, Lloyd George, enacted a radical budget that increased land taxes.

In 1912 Asquith renewed Liberal efforts to establish Irish home rule, a policy that infuriated Protestants in Ulster, a protest that was supported by the government's Conservative opposition.  On the brink of Irish civil war, the government was saved by the outbreak of the First World War, which delayed the inevitable in Ireland.  Arthur Sladden alluded to this in a letter of 22nd September 1914.

In August 1914, Asquith took Great Britain and the British Empire into the First World War.  In a letter of 4th September 1914, Mela Brown Constable referred to Mr Asquith’s stirring speech.  This was an appeal to the nation delivered at the Guildhall, London.

In 1915, his government was vigorously attacked for a shortage of munitions and the failure of the Gallipoli Campaign. He formed a coalition government with the Conservatives and Labour, but failed to satisfy critics. Despite over-seeing national mobilization, the dispatch of the British Expeditionary Force to the Western Front, the creation of a mass army, and the development of an industrial strategy designed to support the country's war aims, the war became bogged down and the demand rose for better leadership.  As a result, Asquith was forced to resign in December 1916, and he never regained power.

Lloyd George replaced him as Prime Minister in December 1916. They became bitter enemies and fought for control of the fast-declining Liberal Party.

Asquith lost his East Fife seat at the 1918 General Election.  He was raised to the peerage in 1925 as the Earl of Oxford.