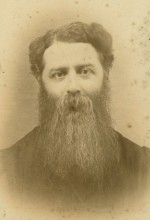 Albert Brown Constable was born on 13th March 1863 in Cheltenham, the sixth of 12 children of Charles Brown Constable by his second wife, Mary Christina (née Mackenzie).  The family had moved to Cheltenham in the mid 1850s, on Charles’ retirement from the Indian army, having attained the rank of Lieutenant-Colonel.  They lived in a large house at 1 Lansdown Place, Cheltenham.  As well as the children from the second marriage, the household also comprised three of Charles’ adult sons from his first marriage, all of whom had been born in India, and his two surviving siblings, Emilia Brown Constable and Frances Pitt Curtis.

The surname Brown Constable had been adopted at the beginning of the 19th century as a result of Albert’s grandfather, Laurence Brown (1758-1824), inheriting the Wallace Craigie estate near Dundee.  The estate had been purchased in 1779 by Laurence’s uncle, George Constable (Albert’s great-great-uncle), who was unmarried.  On George’s death in 1803, Laurence, who was the eldest son of George’s sister, Matilda, succeeded to the estate by virtue of a deed of entail executed on the 23d February 1796, on condition that he added to his patronymic the name of Constable.  Although Albert’s father, Charles (1808-1887), was the fourth son of Laurence, Charles inherited the estate in 1852, his three older brothers all having died before him without issue; there is a road on the Wallace Craigie estate named Brown Constable Street.

Albert was educated at Cheltenham College, Oxford University and at theological college in Lincoln.  His first appointment was in India where he was curate of the mission at Allahabad from 1886-1890.  It was whilst in India that Albert met his future wife, Clara Emily Wall.  They were married at Lucknow on 8th February 1887.  Their first child, Alice Amelia, was born at Allahabad on 31st December 1887.  Brook Deedes, who was the Deacon at Allahabad, under whom Albert worked, was chosen as the godfather.  A second child, John Cecil, was born at Allahabad in September 1889.

The Brown Constable family returned to England in May 1890, when Albert was appointed by the Bishop of Lincoln to Claxby with Normanby in Lincolnshire.  A third child, Wilfred Neville, was born at Normanby.  The following year, in April, Albert was appointed to St Bartholomew, Appleby, near Brigg, Lincolnshire, and was also diocesan inspector.  In 1893, Albert became curate of St John the Evangelist, Hammersmith.

At the end of 1893, the Brown Constables returned to India, where Albert was chaplain at Pachmarhi, Jubbulpur, Nagpur.  Shipping records shows that, on 8th November 1894, Albert and Clara left London for Calcutta.  The UK Clergy list for 1897, under the category “Colonial and Missionary Diocesan Establishments” reveals that Albert Brown Constable was a probationary chaplain at Nagpur.

The relationship between Albert and his wife was not easy, and Clara spent increasing amounts of time returning to England with the children who were educated there.  Albert retired in about 1908 and, by 1911, he and Clara were living separately.  At the time of the 1911 census, Albert was living at Regina Priory, West Ealing, described as a retired Clerk in Holy Orders.

A letter of 12th May 1915 reveals that Albert was suffering from acute neuritis; a doctor whom he had consulted thought he would get better if he had some of his teeth out.  By October 1915 Albert was being treated in a nursing home in London for neuritis, his brother, Harry, paying for the expensive treatment.  If that did not work, the fear was that he would become paralysed.  In a letter of 11th October 1915, Mela reflects on her parents’ relationship, which was never easy.

Albert died intestate, aged 65, in the last quarter of 1928 in the Ashton district of Lancashire.