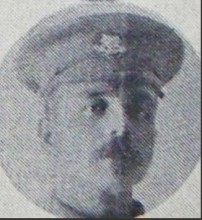 Private Francis Harris (1883-1917), a former employee of Julius Sladden at the brewery, served with Cyril Sladden for a short time in the 9th Battalion Worcestershire Regiment in Mesopotamia.

Francis Harris, known as Frank, was born in 1883 in Evesham, the fifth of eight children of John Harris, a brewery labourer, and his wife, Elizabeths (née Sears).

Frank grew up at Bathwick Terrace, Evesham. His father worked as a labourer at Sladden & Collier’s Brewery. John Harris had been born in Badsey and was from a long line of Badsey Harrises, thus Julius Sladden, one of the co-directors of the brewery, had some affinity with the family. John Harris died in 1896 and, at some stage, Frank worked for the brewery too. His occupation at the time of the 1901 census was given as “Bottler of spirits and liquors”.

Frank married Ada Annie Sutton in 1909. They had a daughter, Marjorie Elizabeth, born in 1910. At the time of the 1911 census, they were living at 9 Rynal Street, Evesham, and Frank worked as barman at a hotel.

It is not known when Frank Harris joined up during the First World War, but he joined the 9th Battalion, Worcestershire Regiment, as a Private, regimental number 30841, and was in Mesopotamia by early 1917. In a letter of 14th May 1917, Cyril Sladden wrote to his father: “You made an enquiry some time back about your former employee Frank Harris who was killed in January. I heard about him soon after the event from his platoon officer whom he had told of the connection he had with me through his employment. He was only with us a short time and went into B Company and was killed while on that beastly night digging work that we were doing preparative to the attack on Jan 25th. I never knew he was with us until after he was killed, and the officer who mentioned the circumstances of his death is not with us now so I cannot get any more from him.”

During the first fortnight of 1917, the 9th Battalion of the Worcesters had been involved in preparations for a systematic attack on the Hai Salient in Mesopotamia. The preparations included digging a system of trenches in successive parallel lines, to act as assembly trenches for the proposed attack. The construction was done speedily and included digging in the open at night which involved some considerable risk. Further details about the events in Mesopotamia at this time may be found on the Worcestershire Regiment website.

Private Harris was buried in Amara War Cemetery. He is recorded on the war memorial in Abbey Park, Evesham, and is also remembered on a kerbstone at Waterside Cemetery, Evesham, together with his wife and daughter who remained living in Evesham: