The Hall Houses on Willersey Road

At the end of the 19th century, if you walked along Willersey Road from the corner of Badsey Fields Lane to the corner of Sands Lane, you would find just four houses:  the present-day Nos 1, 5, 7 & 11 Willersey Road.  They were all built on land that had been bought in 1888 by the members of one family (the Halls and Keens who were linked by marriage).  By 1908, another Hall house had been built at No 9.  Until the 1960s, these were the only houses along this stretch of the road.  As Walt Underill (great-grandson of Owen Joseph Hall who built Auburn Villa at No 7) says, “You could have called it Hall Lane.”  He recalls, as a child growing up in the 1950s, that the houses all had beautiful large gardens and orchards and you could see right across the Recreation Ground; this was before the bungalows in Binyon Close were built in the 1960s and subsequently the houses along Fields Close in the 1980s.

So, how was it that family members that had grown up with humble origins, were able firstly to afford to buy land and then to build on it?  The answer appears to be a profitable few years spent in America by two of the Hall brothers:  Owen Joseph Hall (1849-1899), known as Joseph, and his older brother, Theodore James (1845-1923), known as James.  They were just two of a considerable number of Badsey residents who made the journey to America in the 1870s but, whereas, most of the others remained in America, the brothers returned.  They came back to a village which was beginning to be transformed from large-scale farming to small-scale market gardening.  From 1876, whilst still in America, James began keeping a daily diary listing all his business transactions.  The brothers seem to have made sufficient money from small-scale farming in Auburn, Ohio, that they were able to set themselves up as market gardeners.  Joseph (and presumably James as well) came back from Ohio with a suitcase full of gold coins.  The suitcase was still in the family over 50 years later when Doreen Hall (Joseph’s granddaughter) remembers it in the upstairs barn at No 5 (used for tying asparagus) where she used to play with her cousins. 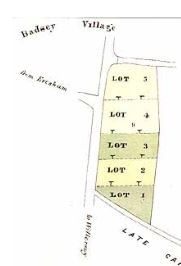 On 7th July 1888, an auction took place at The Swan Inn, Bengeworth, where 16 lots of land were sold.  Lots 1-5 comprised plots of around an acre each on the section of land on Willersey Road between Badsey Fields Lane and Sands Lane.  It was two of these lots (lots 2-3) that were bought by three Hall brothers with the intention of building houses:  James bought Lot 2 for £120 and Joseph, together with his oldest brother, Charles, bought Lot 3 and divided the land between them.   Meanwhile, Joseph’s brother-in-law, Henry Keen, bought lot 4.

The first house to be built was Bredon View (No 11) in 1889, which James Hall moved into with his wife, Jane.  When it was inspected in 1912 for the nationwide Valuation Survey, it was valued at £400 and described as follows:  “Brick and tile detached house in good repair: kitchen and sitting-room, back kitchen and pantry, water closet, 3 bedrooms, 1 over back kitchen.  Brick and tile stable and cart shed; loft over, wood and iron shed; glasshouse.”  James and Jane remained there for the rest of their lives.  On James’ death in 1923, it was inherited by his nephew, George Moisey (son of his sister, Elizabeth Frances Moisey).  George Moisey died in 1948 and Julia Moisey died in 1950.  The house was left to Maud James, a widow, and the second eldest of their eight surviving children (the eldest, Rosa, having emigrated to Canada).  Maud continued to live there for at least another 20 years until Bredon View was eventually sold.

The next house to be built was Auburn Villa (No 7 – known today as Auburn House), which Joseph Hall moved into with his wife, Eliza, and growing family in 1890.  Joseph named the house after the township of Auburn in Ohio where he had lived for five years.  It also was valued at £400 in the Valuation Survey and described as follows:  “Built 1890, brick and tile detached house, good repair: 2 front rooms, back kitchen and pantry, 3 bedrooms (1 over back kitchen), water closet and tap; wood and iron shed.”  Sadly he was unable to enjoy his new home for a long time as he died in October 1899, aged 50.  His widow, Eliza, carried on the business with the assistance of her elder sons.  None of the three daughters married, so stayed in the parental home for the rest of their lives.  Auburn Villa remained in the Hall family until the 1950s when it was sold after the death of the last Hall daughter, Helen Mary Hall, in 1952.

Homeleigh (No 5) was built in 1896 for Charles Hall and his new wife, Elizabeth (Charles’ first wife had died in 1893 and he married for a second time at Badsey in 1895).  It was valued at £290 in the Valuation Survey and described thus:  “House 15 years old, brick and tile, contains: 3 bedrooms, 1 sitting-room, 1 scullery with lean-to wash-house, water closet connected with village water supply and sewer. Outbuildings of brick and tile comprise one horse stable, cart shed and loft over.  The house is detached with frontage of 66 ft to main road and depth of 300 ft approx, quanity 0a 1r 8p.  Garden contains about 200 plum trees: Victorias, Pershores in vigorous bearing, also 20 good apple trees all about 12 years old and in full bearing; the garden is unfenced except towards the road. The house and yard is now let as a police station at £16 per annum, tenant paying rates – the outbuildings are in hand. This is of higher rental than would be obtainable from a private party for the whole; it is in good order throughout (extra safe tenant).”  The survey took place on 10th July 1911.  Charles Hall had died in January of that year, his wife two years earlier.  Charles had no children, so the house was let to PC Frederick Hill and family for a short time, before Charles’ nephew, Thomas Henry Hall and his wife, Louisa, moved in.  They met untimely deaths from Spanish flu in 1918 so Percy Hall, the next eldest nephew, then went to live there with his second wife and children.  They remained there for the rest of their lives, Percy dying in 1957 and Ethel in 1981.

The last Hall house to be built was Cothome (No 9), later known as Inverdoon, built on the plot of land between Nos 7 & 11.  It appears to be on the land which James Hall had bought.  It was described in the Valuation Survey of 1912 as “Brick and tile detached cottage in good repair: living-room, kitchen, back kitchen, pantry, 3 bedrooms, tap water and water closet, shed” and was valued at £300.  It was sold in October 1908 to Alfred Sparrow for £288.  It was then called Cothome, but the name was later changed to Inverdoon.  In 1934, Walter Hall and family moved to Inverdoon from Offenham.  Walter’s mother, Eliza, had recently died at Auburn Villa next-door, but his spinster sisters still lived there.  Alfred Sparrow meanwhile went to live with his son and family at South View Terrace, Brewers Lane.  Walter and Elsie remained there for the rest of their lives.  It was sold after the death of Elsie in 1967.

The most expensive house along this section of road was Rose Villa (No 1).  Joseph Hall’s brother-in-law, Henry Keen, had bought lot 4 at the 1888 sale.  Unlike Joseph and James Hall, Henry had not spent time in America, so did not have a case full of gold coins, but he was one of the first market gardeners in Badsey and had obviously prospered.  Within a year, Henry had built a house on the land which he and his wife, Emma, were occupying by the time of the 1891 census.  It was valued at £550 in the Valuation Survey and described as:  “Brick and tile detached house: hall, kitchen, parlour, big pantry, back kitchen. Glasshouse at side, water closet and coalhouse; 3 bedrooms.  Brick and tile stable and coach-house loft over; 12 rows of trees.”

At the turn of the 20th century, there was one further piece of land along Willersey Road which had been owned by Joseph Hall and which was sold for housing.  Following the untimely death of Joseph in 1899, his widow, Eliza, sold land further down Willersey Road, to the south of Sands Lane.  In 1900, Belmont Terrace, comprising 12 terraced homes, had been built on the land and was fully occupied by the time of the 1901 census (present-day Nos 13-35 Willersey Road).  The terrace was owned at the time of the Valuation Survey in 1912 by Miss M A Hooper of Evesham and each house was valued at £220.

Article by Maureen Spinks (with additional reporting by Shirley Tutton and Wendy Gwynn who spoke to Joseph Hall’s granddaughter, Doreen Underhill, and his great-grandson, Walt Underhill)