We have recently been the fortunate recipient of a 95-year-old Flower Show programme, courtesy of Charles Archer of Ashton under Hill.  Charles is the son of Thomas William Archer (1913-1976), known as Tom, a former Vice President of Littleton and Badsey Growers who farmed at Old Manor Farm, Ashton under Hill.  He is also the nephew of Fred Archer (1915-1999), author of A Lad of Evesham Vale and many other books, who farmed at Stanley Farm.

Tom Archer grew a large acreage of sage and parsley and a whole range of other crops which were marketed through LBG.  He was also a local preacher in many chapels, including Badsey, Aldington, Littleton and Bretforton.  After his father’s retirement, Charles continued sending produce to LBG, at one time growing salad onions for many of the Italian families in the Badsey area.

A perusal of the programme will reveal that, in many ways, not much has changed in nearly a hundred years!  Click on each image to find out more about the Flower Show in 1926. 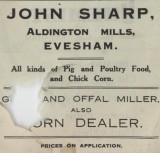