Queen Elizabeth II ascended the throne on 6th February 1952 but her coronation did not take place until the following year, 2nd June 1953.  Her Golden Jubilee celebrations were held over the weekend of 1st-4th June 2002.  Not since 1887 had a sovereign’s Golden Jubilee been celebrated.  Despite the death of Princess Margaret in February 2002 and of Queen Elizabeth the Queen Mother in March 2002, and predictions in the media that the anniversary would be a non-event, the jubilee was marked with large-scale and popular events in London and at numerous locally-organised events.

A service of Thanksgiving to celebrate the Golden Jubilee was held on Sunday 2nd June in the playground of Badsey First School.  Those attending were asked to bring a chair.  The following prayer was said:

God, the source of all authority,
Bless our queen, Elizabeth, her family
And the family of nations she upholds.
On this her Golden Jubilee Anniversary
May she remain a worthy focus of our loyalty.  Amen

A Fun Day was held on Bank Holiday Monday, 4th June.  On the day there were adult races, a tug of war (photos below copyright and courtesy of The Evesham Journal), disco, karaoke and various other entertainments. 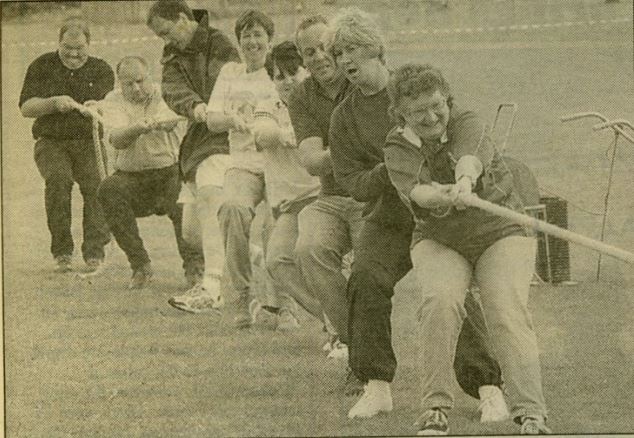 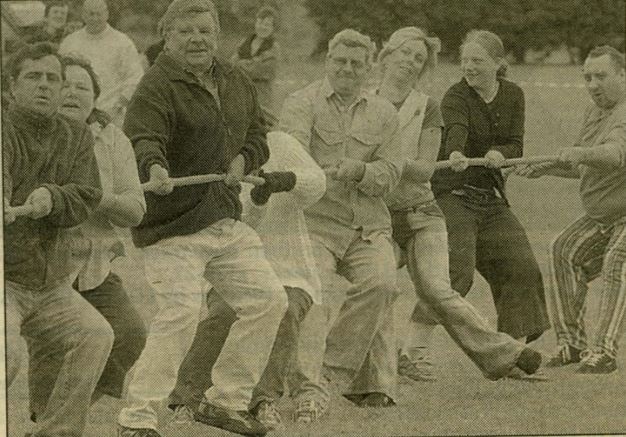 Mary Dore organised a street party on Seward Road.  A total of £192.25 was raised for the Air Ambulance Service.

On the afternoon of Sunday 2nd June there was a garden party with cream teas.  Attractions included racing ferrets, jazz group, camel racing, skittles, raffle, caricaturist and others.  For children there was face painting, bouncy castle, pony rides, ice cream, treasure hunt and other amusements.  In the evening there was a dance with a buffet supper in a marquee on the lawns of “Bereta”, the home of Mrs Beryl Osborne.  The day concluded with a firework display. 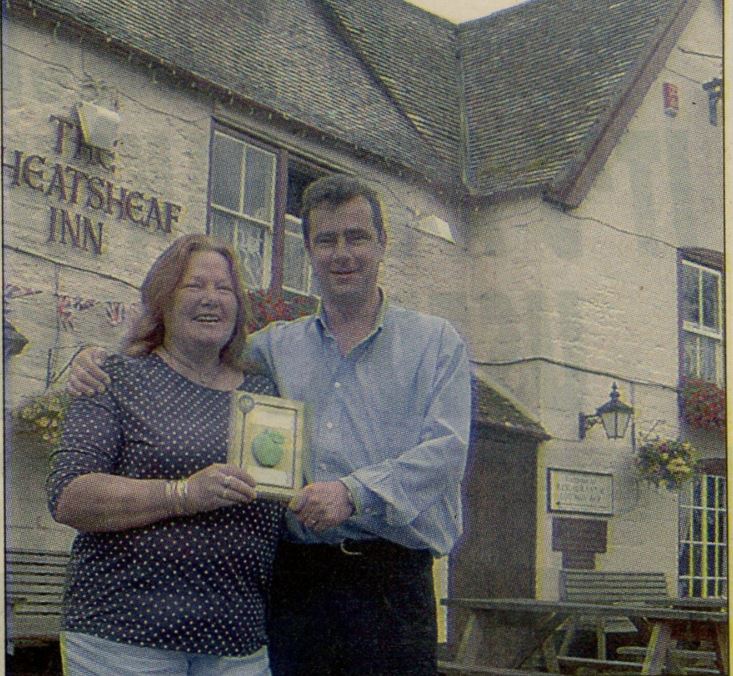 The Wheatsheaf won a Bronze Jubilee Green Apple Heritage Award in a national campaign to recognise the role that pubs play in helping preserve the best aspects of the country’s buildings.  The Wheatsheaf was run by husband and wife team, Ken and Heather Woods (pictured right), who took over the pub in 1999.  Heather said, in an interview with an Evesham Journal reporter:

“We are well known for our displays of flowers – our courtyard looks absolutely amazing at the moment – and sent in a couple of photographs with our entry.  It is a great thing to have won one of the awards.”

In commemoration of the Golden Jubilee, Lizzie Noyes invited parishioners to send in a photo of their house and residents.  These photos were then compiled in an album for public display at the Flower Show and other events.

Kathryn Hough, the energetic Chairman of the PTA, had tried to get the Queen to come and open the Fete.  She explained at a PTA meeting held on 23rd January 2002 that, on hearing that the Queen would be touring the country on goodwill visits during her Jubilee year, she had written to the Queen’s secretary to see if Her Majesty would consider opening the Fete as part of her Jubilee celebrations.  Perhaps not surprisingly, the Lord Lieutenant of Worcestershire declined on the Queen’s behalf, but did arrange for the Fete to be advertised on the Jubilee website.

As the Queen couldn’t make it, various other alternatives were discussed.  Eventually it was agreed that it might be nice if another Elizabeth were to be invited.  This was the new Head teacher, Elizabeth Spencer, who would take up her post at the start of the summer term 2002.  Mrs Spencer, who looked very regal in her floral dress and large hat, performed her duty in opening the Fete magnificently.

Marquees were provided by Badsey Scouts.  The Celebration Reed and Brass Band provided music, the school choir sang and the children danced in the arena.  The newly-formed Badsey Society put on a display of market gardening.  There was a fancy dress competition, a bouncy slide and castle, pony rides, a tug o’ war, many stalls and games, a grand draw and refreshments.

In order to mark the occasion, a memento for each of the school children was distributed at the School Fete.  This was a 50 mm coin at a cost of £1.65 each with a simple wallet for 25p.